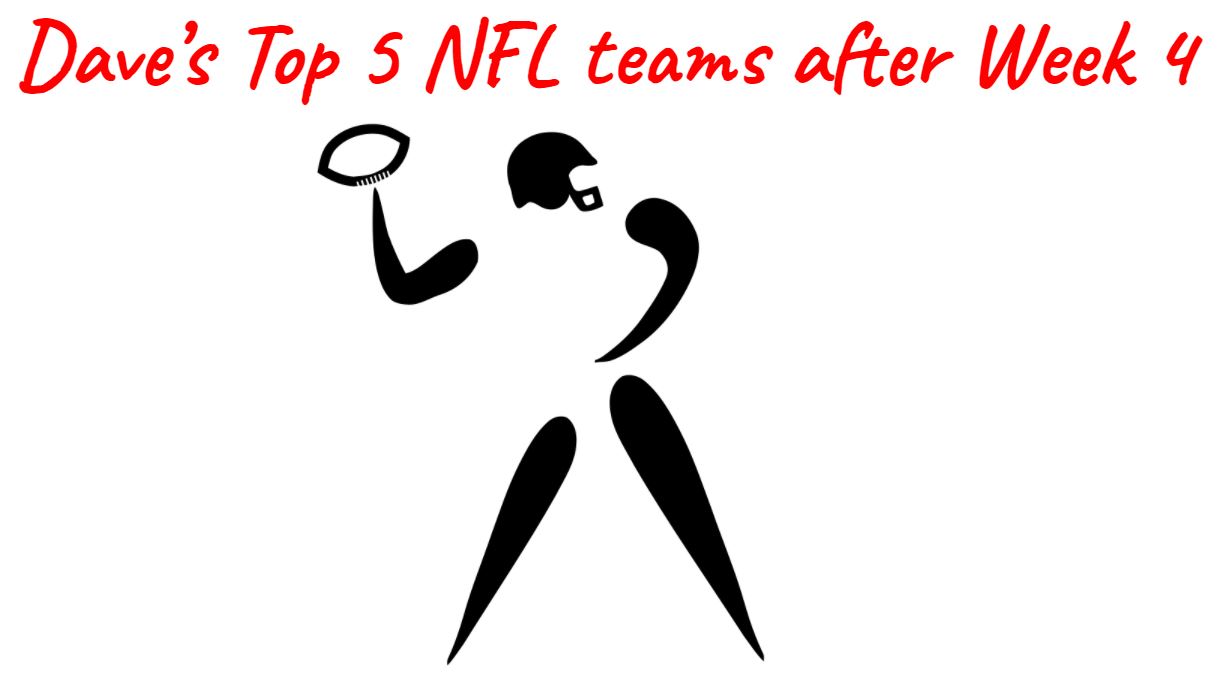 My Top 5 NFL teams after Week 4

My Top 5 NFL teams after Week 4

The Chiefs stay right where they are from my rankings last week. However, their hold on the top spot is tenuous with the Packers looking every bit the contender the throne few outside of Green Bay thought they would be. Kansas City dodged a bullet on MNF, a game that should have been played as Sunday Night Football, when Patriots starting QB Cam Newton was diagnosed positive for COVID-19. Fortunately nobody else was infected and the league moved the game back just one day to Monday. That gave Patrick Mahomes the most uneven QB match-up of Week 4, pitting the Chiefs against Brian Hoyer, and eventually Jarett Stidham for the Pats. Hoyer was so bad he got pulled for a guy that couldn’t get off the practice squad to start the season, and yet, the Patriots STILL had a chance to win the game before a costly pick-six essentially ended it. The Chiefs are still holding on to #1, but the hold is losing some grip after a shaky Week 4 win 26-10 over New England.

Once again the Packers are my #2 team in the Top 5, but as mentioned above, they are “climbing” from a 2 spot to a….1a if you will. On Monday night the Packers sliced and diced the winless Atlanta Falcons, a team struggling to stay alive and keep their coach. Rodgers was once again brilliant, missing only 6 passes the entire game, setting TE Robert Tonyan up for a career night, and working his way through the game without a turnover yet again. Through the first four games of the season Rodgers has 13 TD’s to zero INT’s. The Packers are 4-0 and have scored 30 or more in each game of the season, a record for the Green & Gold. Each week a new star on offense is born, and in Week 4 it looked like the Packers defense might have found their stride, holding the Falcons to just 16 points, nine fewer than their previous low of 25. If what we’re seeing from the Packers holds through the bye week, and they can go to Tampa and beat the surging Bucs, there is no way I can keep Green Bay out of the top spot. No matter how good the Chiefs play next..

You gotta give up to Russell Wilson. Through 4 games this guy has tied Peyton Manning’s mark for TD’s over that stretch (16), and the Seahawks have matched their best start since 2013. Ironically the same year Peyton threw those 16 TD’s in the first four weeks, and the very same year the Seahawks beat Peyton’s Broncos for their only Super Bowl victory. The Seahawks win over the Dolphins in Week 4 doesn’t scream “BIG win”…but it kinda was. The travel distance between Seattle and Miami is the furthest in the NFL, the Dolphins have had recent success against Wilson and the Seahawks, Seattle could have “looked past” a struggling Dolphins team, but none of that happened. No, Seattle didn’t blow out Miami (31-23), but Wilson was again sterling (360 yards, 2TD’s), and the Seahawks did what they had to do to pull out a tough road win. Once, and if, the Seahawks get back their full complement of players, including Jamal Adams and Carlos Hyde, Seattle should be in good shape to take over what is by far the best overall division in the NFL.

Here. Comes. Buffalo. The Bills ladies and gents, are for real. Josh Allen is for real. Sean McDermott is a good coach and the team is buying in. The most obvious, and glaring improvement comes from Josh Allen. Through the first four weeks of the season Allen is looking like a legit MVP candidate having a stellar second-act to his breakout season last year. Allen has thrown for 1,326 yards, 12 TD’s w/1INT and has a QBR of 87.1. His yardage numbers are 2nd in the NFL, his TD’s tie him for 1st, his QBR 3rd. If Allen continues at this clip he’ll surpass 5,300 yards with 48 TD’s and just 4 INT’s. Think about that. Coming out of Wyoming this would have been unthinkable…but it’s happening. The Bill are for real, and I don’t think they’re going anywhere but up anytime soon.

The Ravens bounced back, a bit, from their week 3 loss to the Chiefs. I say “a bit” because their 31-17 win Sunday came at the expense of the Washington Football Club and a disastrous QB in Dwayne Haskins. **Side bar: Haskins will lose his job to Alex Smith at some point this season.**  The fact that the Ravens only beat Washington by 14 raises more questions than it does provide answers for me on where this club is headed. Coming into the season I had Baltimore as my number one team, and projected them winning 15 games. That still may happen, but I highly doubt it at this point. Lamar Jackson did have a better game than he did against Kansas City, going 14-21 with 193 yards, 2 TD’s, and his 1st INT of the season. Jackson also ran for 53 yards and a TD but they “eye-ball” test against a bad Washington team didn’t get passed to my complete satisfaction. I’m keeping the Ravens in my Top 5 this week, but they better watch out, some fresh meat is lurking just outside…