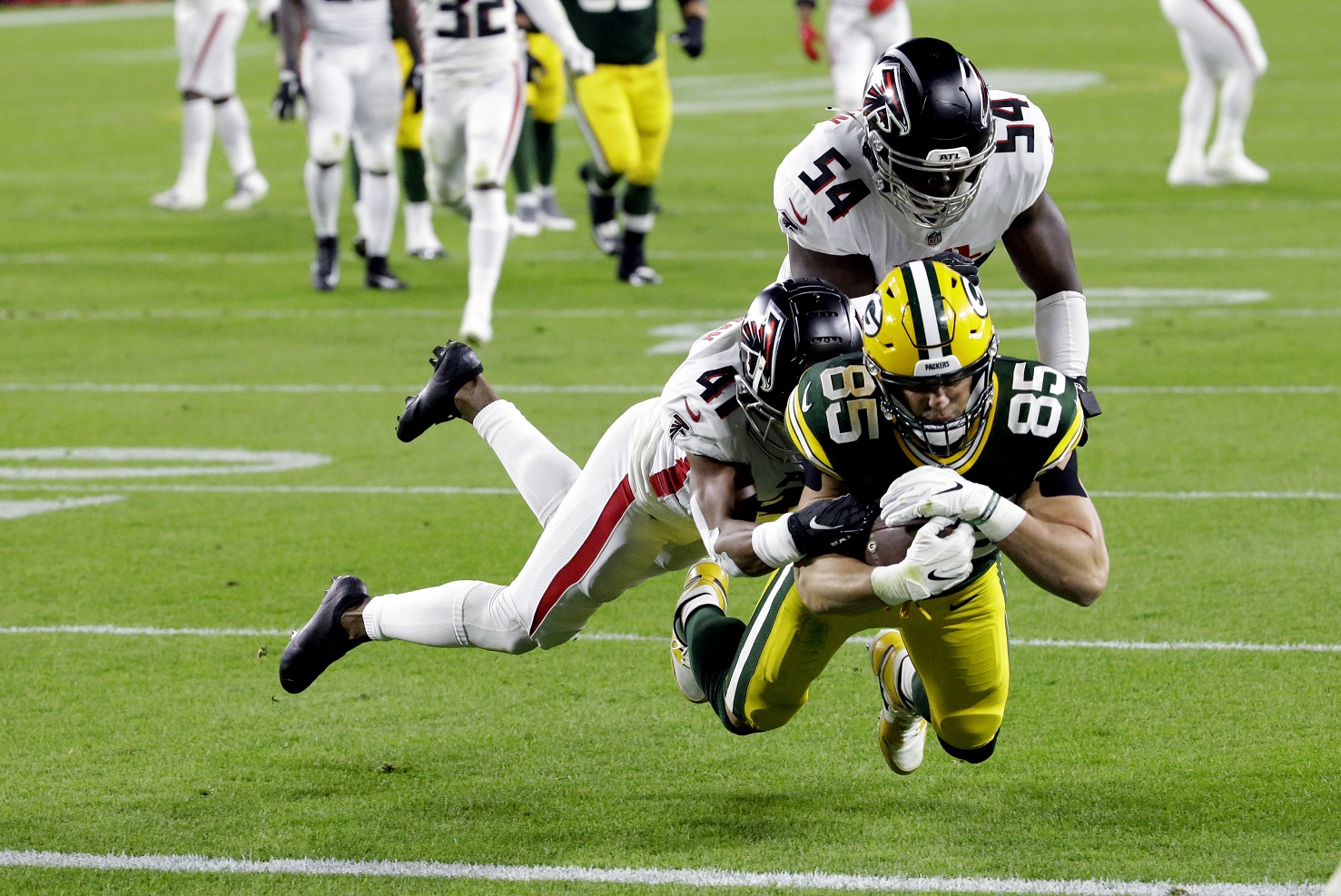 GREEN BAY, Wis. — Aaron Rodgers connected with tight end Robert Tonyan on three of his four touchdown passes and the Green Bay Packers remained unbeaten with a 30-16 victory over the winless Atlanta Falcons on Monday night.

The Packers (4-0) opened a season by scoring at least 30 points in four straight games for the first time in franchise history. Todd Gurley’s two touchdown runs couldn’t stop the Falcons from their first 0-4 start since 1999, when they followed a Super Bowl season by going 5-11.

Green Bay was missing its top two receivers. Davante Adams sat out a second straight game with a hamstring injury and Allen Lazard had gone on injured reserve with a core problem.

Yet that didn’t slow down Rodgers, who capitalized on Atlanta’s depleted secondary and helped Tonyan deliver the most productive performance of his young career.

The 2017 undrafted free agent from Indiana State finished the night with six catches for 98 yards along with his three touchdowns to set career highs in all three categories. Tonyan, who entered this season with two career touchdowns, has reached the end zone five times over his last three games.

Rodgers went 27 of 33 for 327 yards. He has thrown 13 touchdown passes without an interception this season.

After blowing two-touchdown leads in the fourth quarter each of the last two weeks, the Falcons (0-4) never were ahead in this one. Green Bay took the lead for good when Rodgers threw a 6-yard touchdown pass to a wide-open Aaron Jones on the game’s opening series.

Atlanta already was playing without safeties Ricardo Allen (elbow) and Keanu Neal (hamstring) as well as cornerback A.J. Terrell (COVID-19 reserve). That beleaguered secondary took more hits when safety Damontae Kazee got carted off the field and safety Jaylinn Hawkins left with a concussion in the second quarter.

Green Bay capitalized by scoring touchdowns on three of its four first-half possessions to build a 20-3 halftime lead. The Packers’ other first-half series ended less than a yard away from the end zone when Deion Jones stuffed Jamaal Williams on fourth-and-goal.

But the Falcons gained just 14 yards on their other four first-half possessions. Atlanta’s offense fared better in the second half, but only after Green Bay had built a commanding lead.

Julio Jones had four catches for 32 yards and broke the Falcons’ record for career receptions despite sitting out the second half with a hamstring injury. Jones entered the night tied with Roddy White, who caught 808 passes for the Falcons from 2005-13.

Rodgers became the 11th player in NFL history to have at least 4,000 completions. One of the other players to reach that mark is Atlanta’s Matt Ryan, who went 28 of 39 for 285 yards with no touchdown passes or interceptions Monday.

Falcons: Kazee and Hawkins didn’t return after leaving the game in the second quarter. Jones didn’t play the second half. Fry, who made his lone field goal try and went 1 of 2 on extra-point attempts, played because kicker Younghoe Koo was unavailable due to a groin injury.

The Falcons host Carolina on Sunday.
The Packers have an off week before visiting Tampa Bay on Oct. 18.

TOP PHOTO: Green Bay Packers’ Robert Tonyan (85) goes in for a touchdown as he is tackled by Atlanta Falcons’ Sharrod Neasman (41) and Foye Oluokun (54) during the first half of an NFL football game, Monday, Oct. 5, 2020, in Green Bay, Wis. (AP Photo/Mike Roemer)