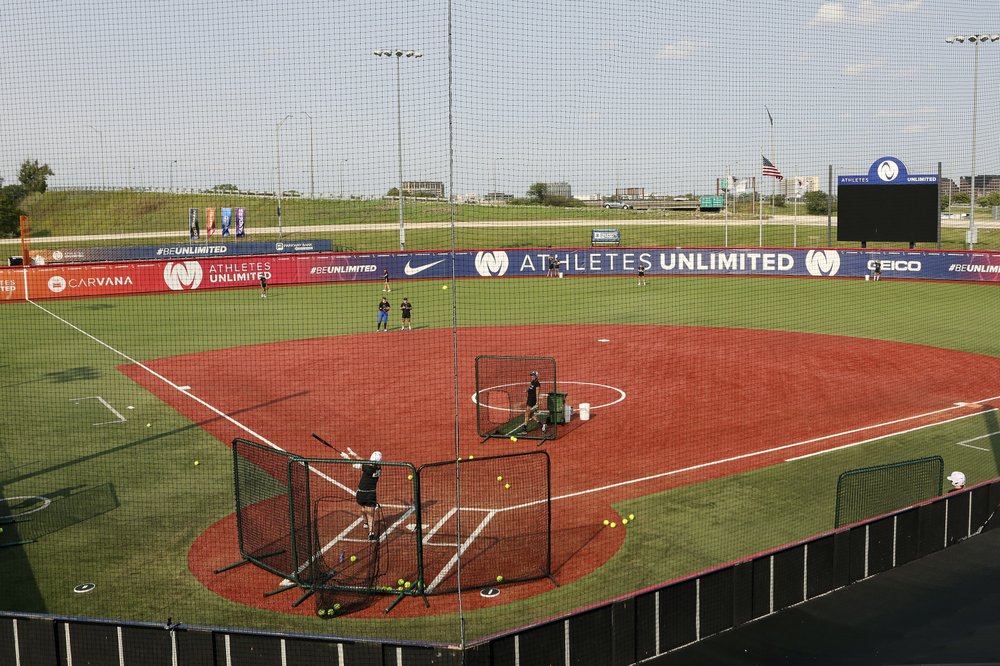 ROSEMONT, Ill. (AP) — Cat Osterman can only wonder what the delivery drivers think.

She is not allowed to drop in or hit the drive-thru when she wants a coffee or latte, even though she can walk right over from her hotel. In a COVID-19 world, it can be a tall order.

“I laugh just when we have to order Uber Eats and it’s Starbucks right across the street,” said Osterman, who pitched the U.S. to a softball gold medal at the 2004 Olympics. “I want to know how lazy the drivers think we are.”

Life in a bubble is a bit different for Osterman and the other elite players gathered in suburban Chicago for the inaugural Athletes Unlimited softball season. Eating out is not an option. Forget about going to the supermarket or just about anywhere else.

When they’re not at the ballpark or the indoor facility across the parking lot, they’re at their hotel or apartment. Just about every other place is off limits to them. If they want to see family and friends, well, there’s FaceTime or Zoom.

They’ve been at it for more than six weeks, following strict protocols, wearing masks and distancing, and getting tested twice a week.

It’s all part of launching a new league, with an unusual fantasy-based format, in a pandemic.

Instead of the championship going to the team with the best record or the one that prevails in a postseason, the player with the most points based on performance is crowned. The monthlong season ends Monday.

“I get to watch this vision that we’ve had so long finally erupt to life,” catcher Gwen Svekis said. “I’ve enjoyed every single moment of it. Being in the shield, actually, I think has been more joyful than any of us anticipated.”

Besides getting to pick the brains of some of the sport’s top competitors, they are forming tighter bonds than they would under normal circumstances.

″(You) get to know people on a deeper level because you can’t really go anywhere else,” catcher Sashel Palacios said.

Some of the 57 players would have been in Tokyo had the Olympics not been postponed. Instead, they are playing before national TV audiences, in an empty ballpark a long foul from the runways at O’Hare. And they’re making it work.

They got a TV deal with ESPN and CBS Sports Network. Topps is producing a women’s professional softball trading card set for the first time in its 82 years.

The softball players got a big say in key decisions, from uniform colors to the TV deals. They also share in the profits and get bonus money in addition to $10,000 guaranteed. Investors’ returns are limited.

There are no team owners or general managers. Rosters are picked each week by team captains, who are the four top players in the standings.

There’s no travel. The plan all along was to have games in Rosemont. When the pandemic shutdown hit shortly after the softball league was announced in March, that added a few more wrinkles.

It happened before tickets went on sale, and the seats have remained empty even though limited crowds are allowed in Illinois. It also meant assembling a medical advisory board with doctors and two consulting firms to help develop a plan to start the league and keep everyone safe.

“The reality is you always have to stay vigilant, and there’s this concept it’s upon all of us to kind of take all the precautions and be careful and to never kinda take anything for granted,” Patricof said. “You have to remain vigilant.”

More than 1,100 tests have been administered to players, full-time staff and gameday production crew, Patricof said. The positivity rate is below 1%; one player tested positive at home and a couple more did after arriving in Rosemont. That there hasn’t been an outbreak among the group is a relief.

They’re not completely isolated the way NBA players are, which is why they call the setup a shield rather than a bubble. Some workers live in the area and commute from home. But there are strict rules to follow — as well as ways to have fun and connect.

There are the socially distanced parties every Monday inside the practice bubble and weekly “Friday Night Lights” gatherings. The players usually sit six feet apart on the ballpark field and discuss personal topics, such as body positivity, to get to know each other on a deeper level.

“This is some of the most fun I’ve had playing the sport of softball, to be honest,” said the 37-year-old Osterman, who leads the points standings. “Obviously winning a gold medal in 2004 is a highlight. But this is six weeks of just pure fun and excitement and competitiveness that I don’t think has ever been replicated in my life.”

When it comes to safety, there are reminders at the facility about identifying virus symptoms, wearing masks and not sharing equipment, spitting, yelling, whistling or singing. No high-contact celebrations, either.

As for where they can go? About the only place besides their hotel or apartment and ballpark or indoor facility is a gym contracted by Athletes Unlimited. If they get in the car, the trip has to be 15 minutes or less with no more than three people in a vehicle. Masks need to be worn and windows kept open.

At the hotel, some players were given their own room. Others share suites, but have individual bedrooms. Housekeeping is limited to once a week.

They’re not allowed to visit each other’s rooms. And if they want that latte?

“There’s been, I feel like, a waste of money with delivery fees,” Svekis said.

TOP PHOTO: Players for Athletes Unlimited practice on Wednesday, Sept. 16, 2020, in Rosemont, Ill. Elite players are living life in a bubble to prevent the spread of COVID during the inaugural Athletes Unlimited softball season. When they’re not at the ballpark or an indoor facility across the parking lot, they are at their hotel or apartment. Everywhere else is off limits to them. (AP Photo/Teresa Crawford)