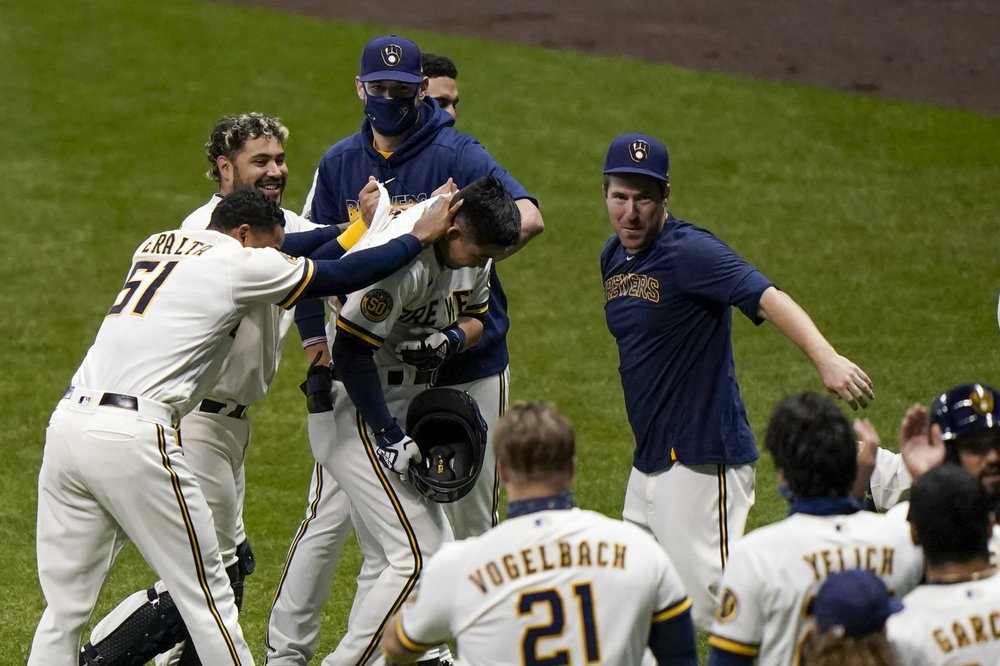 MILWAUKEE (AP) — The St. Louis Cardinals and Milwaukee Brewers hadn’t faced each other all season before this week despite playing in the same division.

They spent Monday making up for lost time.

Both games of their doubleheader split went into extra innings after being scheduled for seven, with the winning team coming from behind each time. The Brewers won the opener 2-1 in eight innings and were three outs from a sweep before the Cardinals rallied to take the nightcap 3-2 in nine innings.

“It’s always tough to swallow when you’re close to sweeping both of those games,” Brewers second baseman Keston Hiura said. “We just have to turn the page.”

Hiura hit a sacrifice fly to score Avisail Garcia with the winning run in the eighth inning of the first game. St. Louis’ Paul DeJong knocked in the go-ahead run with a two-out single in the ninth as the Cardinals came back from a 2-0 deficit.

Monday’s doubleheader opened a three-day, five-game series between these NL Central rivals. Counting this doubleheader, the Brewers will play the Cardinals 10 times over their last 16 games.

Milwaukee was supposed to open its home schedule against St. Louis on July 31, but the Cardinals had a coronavirus outbreak that caused that weekend series to get postponed.

The Cardinals (21-21), Cincinnati Reds (23-26) and Brewers (21-25) are fighting for second place in the NL Central behind the Chicago Cubs. The top two teams in each division earn automatic playoff berths as part of this year’s expanded postseason.

“We hold the key to our own destiny,” DeJong said. “That’s the way we see it.”

A doubleheader sweep would have put the Brewers percentage points ahead of St. Louis for second place. By losing the second game, Milwaukee instead tumbled to fourth.

The Brewers led the nightcap 2-1 in the seventh thanks to Jedd Gyorko’s two-run homer, but ace relievers Josh Hader and Devin Williams were unavailable after pitching in the first game. St. Louis tied it when Brad Miller’s single off Eric Yardley scored Paul Goldschmidt in the seventh.

In the ninth, DeJong hit a liner off Justin Topa (0-1) that barely eluded the reach of shortstop Orlando Arcia and went into left field to score Tommy Edman from third. Edman had started the inning on second base under Major League Baseball’s new extra-inning format.

The Brewers had runners on first and second with nobody out in the bottom of the ninth, but Tyler Webb induced a double-play grounder from Luis Urias and struck out Jace Peterson to earn his first save.

In the first game, St. Louis took a 1-0 lead in the top of the eighth on Edman’s two-out RBI single off Freddy Peralta (2-1).

Ryan Braun tied it with an RBI double off the center-field wall against Ryan Helsley (1-1). Hiura won it with his bases-loaded sacrifice fly off Austin Gomber.

The opening game was a pitchers’ duel between St. Louis’ Kwang Hyun Kim and Milwaukee’s Josh Lindblom, who both spent last season in the Korea Baseball Organization.

Kim struck out six and allowed three hits and three walks after getting activated from the injured list. Since earned runs became an official statistic in 1912, Kim is the first NL pitcher to have four straight starts in a season in which he threw at least five innings while allowing three or fewer hits and no earned runs.

Lindblom struck out six while allowing three hits and no walks in five shutout innings.

“Lindblom pitched well today and I also think I pitched well today, but I just wish the KBO’s other players who will will come to the MLB later on do well here as well,” Kim said through a translator. “So (it) just was a wonderful day today.”

Brewers: Activated right-handed reliever Ray Black from the 45-day injured list. Black hadn’t pitched all season due to a shoulder injury. He went 0-1 with a 5.14 ERA in 15 appearances last season.

Milwaukee star Christian Yelich struck out three times in each game. The 2018 NL MVP has fanned three times in four of his last five games as his batting average has dipped below .200.

“Christian is struggling,” Brewers manager Craig Counsell said. “There’s not much else to say about it. He’s struggling, but I know that we need him and so we need him to get out of it, we need him to help produce runs. We have to figure out the best way to get him in a better position, for sure.”

The Brewers claimed outfielder Billy McKinney off waivers from Toronto and assigned him to their alternate training site in Appleton, Wisconsin. They also designated infielder Ronny Rodriguez and right-hander Trey Supak for assignment.

The Cardinals and Brewers meet again Tuesday in the lone single game of the series. Jack Flaherty (3-1, 3.08 ERA) pitches for St. Louis, and Brett Anderson (2-3, 4.64) starts for Milwaukee.

TOP PHOTO: Players congratulate Milwaukee Brewers’ Keston Hiura after his walk off sacrifice fly during the eighth inning of the first game of a baseball doubleheader against the St. Louis Cardinals Monday, Sept. 14, 2020, in Milwaukee. The Brewers won 2-1. (AP Photo/Morry Gash)