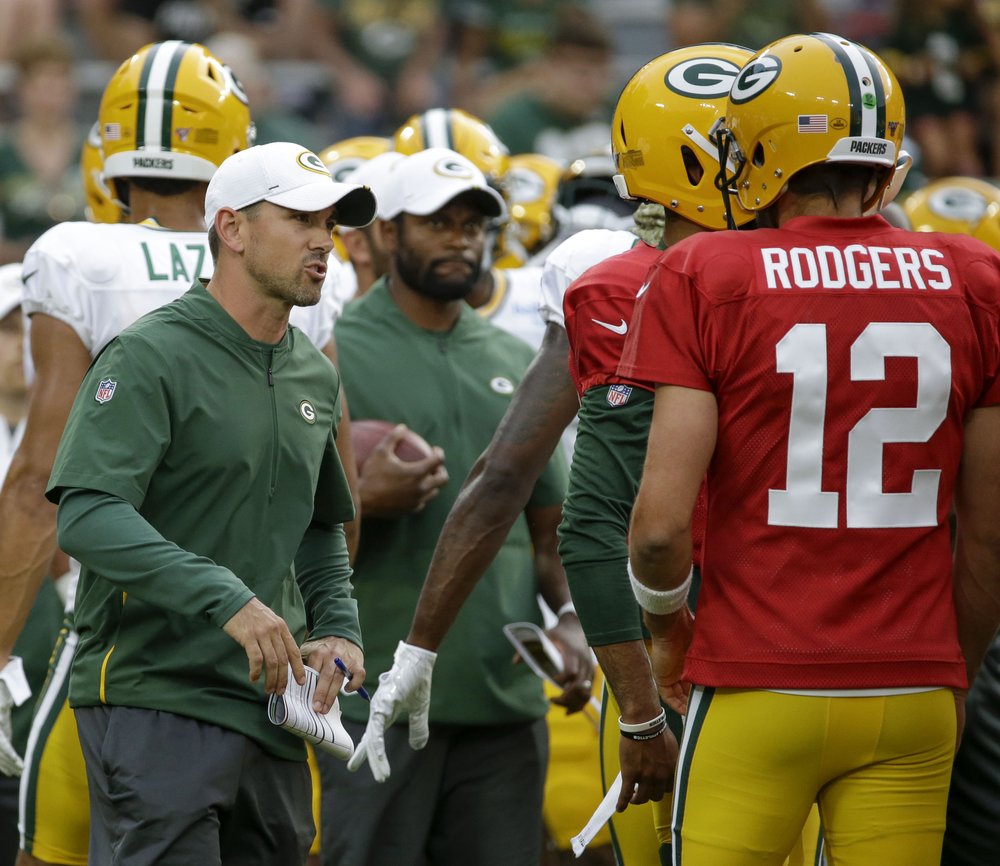 Green Bay Packers quarterback Aaron Rodgers says all those Zoom sessions during this unusual offseason improved his comfort level with the offense and his working relationship with second-year coach Matt LaFleur.

Rodgers hopes to demonstrate the benefits of those conversations when the Packers open the season Sunday at Minnesota.

“The Zoom meetings this offseason, I think, really helped our relationship to progress to where we’re hashtag #FriendGoals,” Rodgers quipped Wednesday.

Rodgers said that he and LaFleur started to understand each other better last season while helping Green Bay win the NFC North and reach the conference championship game.

LaFleur had taken over for Mike McCarthy, who had coached Green Bay throughout Rodgers’ tenure as the Packers’ starting quarterback.

“It was going to be a work in progress when you have guys from different types of backgrounds and systems, but I really felt like the communication with us was so strong,” Rodgers said. “It was really non-stop. We would have conversations early in the morning and a lot of conversations late at night about things we were thinking about — him asking my opinion about things, me kind of bouncing things off of him and trying to see where he was coming from.”

Rodgers described the Zoom sessions during the Packers’ virtual offseason as the “desert rose” that made his working relationship with LaFleur, offensive coordinator Nathaniel Hackett and quarterbacks coach Luke Getsy stronger than ever.

“We just spent so many hours just talking,” Rodgers said. “I think it was great for us all to really kind of feel into that, get some strength in the grounding of our friendship and our working relationship. I think it’s really changed the way we’ve kind of installed plays and are communicating things.

“I think Matt’s definitely more comfortable in his second year. That’s natural. Any leadership position you’re always going to learn and probably be most critical of yourself between years one and two. I think he’s very comfortable and explaining things really, really well. He’s been super creative this offseason, this training camp.”

The Packers didn’t do much during the offseason to boost a receiving group that lacks proven performers beyond three-time Pro Bowl selection Davante Adams. They traded up in the first round to take Utah State quarterback Jordan Love, a move that complicates Rodgers’ hopes of finishing his career in Green Bay.

But that hasn’t seemed to impact Rodgers’ attitude as he gets ready for this pandemic-altered season.

“He’s been such a positive influence on everybody on this football team,” LaFleur said last week. “I can’t speak enough on how important he is obviously to this football team and just the energy he brings, everybody feeds off of. He’s been excellent, and it’s been a lot of fun to be around.”

Rodgers has built his Hall of Fame-caliber career by dominating these divisional matchups.

The Packers have gone 47-18-1 in games Rodgers has played against NFC North teams (18-5 against Chicago, 15-5 against Detroit and 14-8-1 against Minnesota). That includes a perfect 6-0 record last year.

Opposing coaches are all too familiar with Rodgers’ history of success in this division. Vikings coach Mike Zimmer gets a reminder every time he watches the Packers on film and sees Rodgers scramble away from defenders and throw under pressure with pinpoint accuracy

“Some of the plays he makes take your breath away,” Zimmer said. “It’s kind of like watching Barry Sanders run the football.”

The Vikings replaced their top three cornerbacks from last season, letting Xavier Rhodes, Trae Waynes and Mackensie Alexander leave as free agents. Mike Hughes and Holton Hill have taken over the top two spots, with rookies Jeff Gladney and Cameron Dantzler also in line for significant roles. All six cornerbacks on the roster are 23 years old or younger.

But the biggest difference Sunday will be in the stands. Rather than dealing with that raucous crowd that generally gives the Vikings such a home-field advantage, Rodgers will be playing a game in front of no fans for the first time in more than two decades.

“I was jogging the memory banks and thinking about the last time I played a game of football without a crowd,” Rodgers said. “I’d have to go back to my sophomore year, which would be 1999 we played against Grant High School in Sacramento on a Saturday morning with no fans. It’s been, what was that, 21 years since that has happened. So that will be very strange.”