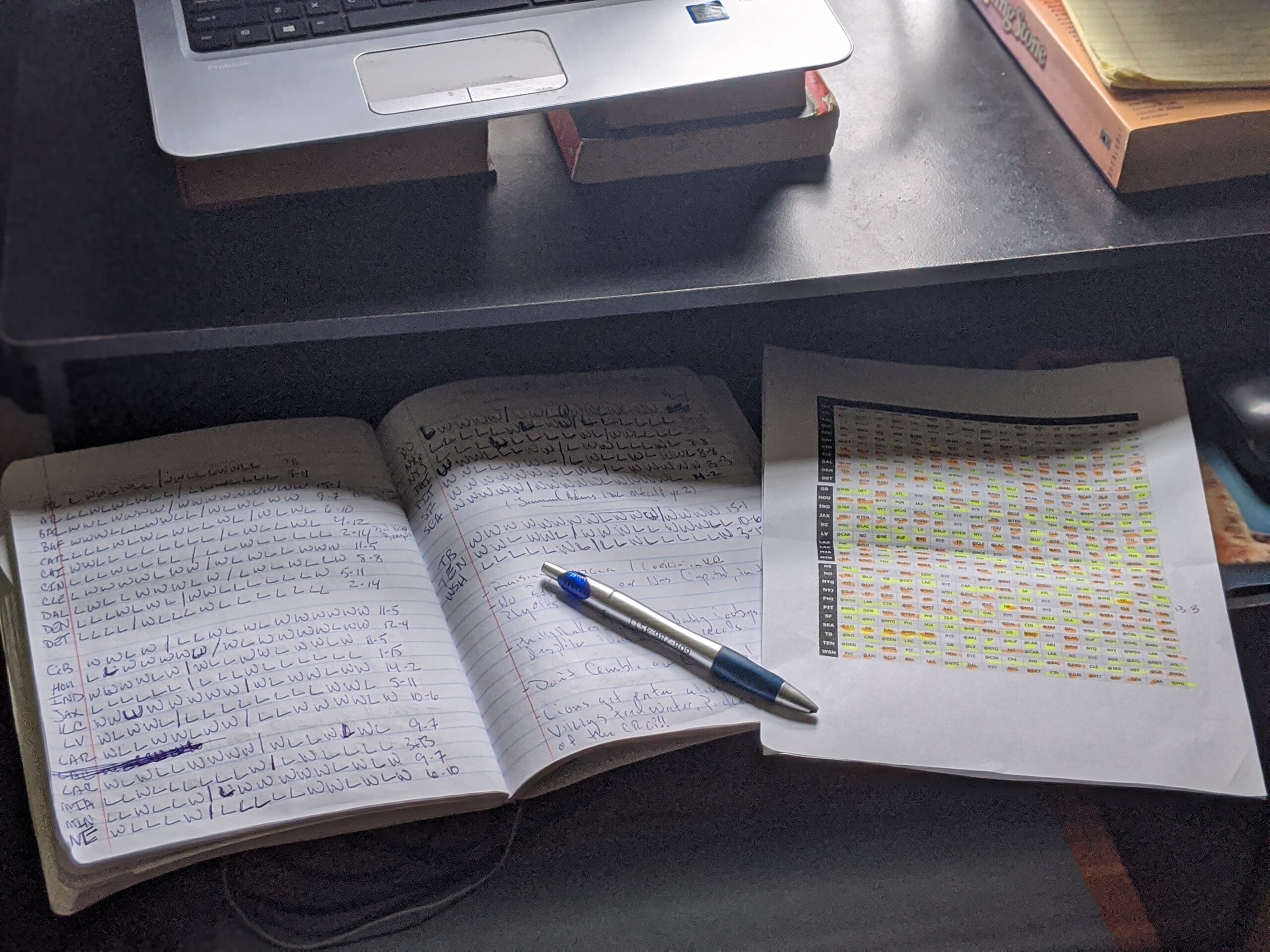 When I started talking about my crazy, stupid, always partly wrong “football matrix”, listener Tom said it sounded more confusing than the Matrix movie itself.

Tom’s assessment that my “football matrix” is confusing is a fair one. It is confusing, even to me. However, it has netted me some decent results when attempting to predict future success for an NFL team in the coming season.

Essentially what I do is this: I construct a grid in alphabetical order (not by division or conference) and assign each team my overall grade (A-F). Once that’s been completed I get to work with picking week-one games for each team. The process is followed, in alphabetical order until all 17 weeks of the schedule have been completed. The trick is to keep good track of your “grades” on each team and stick to them, otherwise you start second guessing yourself halfway through the season and throw your whole grid off.

The reason this works, or doesn’t work for me, depending on season is largely based on my grading of each team. This year more than any will EVER be (I hope) we have way less information to go off of, which becomes dangerous when assigning grades. For example, I assigned the Tampa Bay Bucs an A grade for obvious reasons, but because of that logic my “matrix” works out to a 15-1 season for Tampa Bay.

Not sure that’s realistic. But…..as I’ve said many times in the past few months, this is 2020 and EVERYTHING is on the table.

Overall I feel pretty confident in most of my grids predictions, including the Green Bay Packers taking the NFC North for a second consecutive season with a record, only slightly worse than last year’s at 11-5. The Vikings come in 2nd with a record of 9-7, the Bears 3rd at a lowly 4-12, and the Lions somehow fall to a catastrophic 2-14.

Some of my other notable season predictions I think may actually hold include the Baltimore Ravens steam-rolling again to a 15-1 mark, the Super Bowl Champion Chiefs going 14-2, the Saints staying relevant at 12-4 and the Seahawks crushing the NFC at 14-2. San Fran has another great season as well at 13-3.

As we all know from doing March Madness brackets, or trying to play along in weekly pick-em contests most of this stuff goes bust after week one, but in the season ahead I think we’ll see some real cream rise to the top, and a whole bunch of bottom dwellers trying to figure it out.

Considering all we’ve been through as sports fans over the past six months though, I’m ready to be wrong on everything and still feel ‘right’ about it at the same time.

Now, here are some of my “possible” season headlines before Week One:
“New York Governor Andrew Cumo bans fans from attending NFL games in New York, saving fans the embarrassment of watching both teams go 3-13 this season”

“Like the Coen Brothers classic film, they’ll be a RAISING in ARIZONA with Kyler Murray and DeAndre Hopkins”

“Don’t GAMBLE on Las Vegas; Raiders will still stink at 5-11”

“They’ll be no representation for Washington in the playoffs, Football Club will be terrible going 3-13”

NFC NORTH:
“Lions get eaten alive! Bears get mauled! Vikings…tread water. Packers are the CREAM of the crop!”