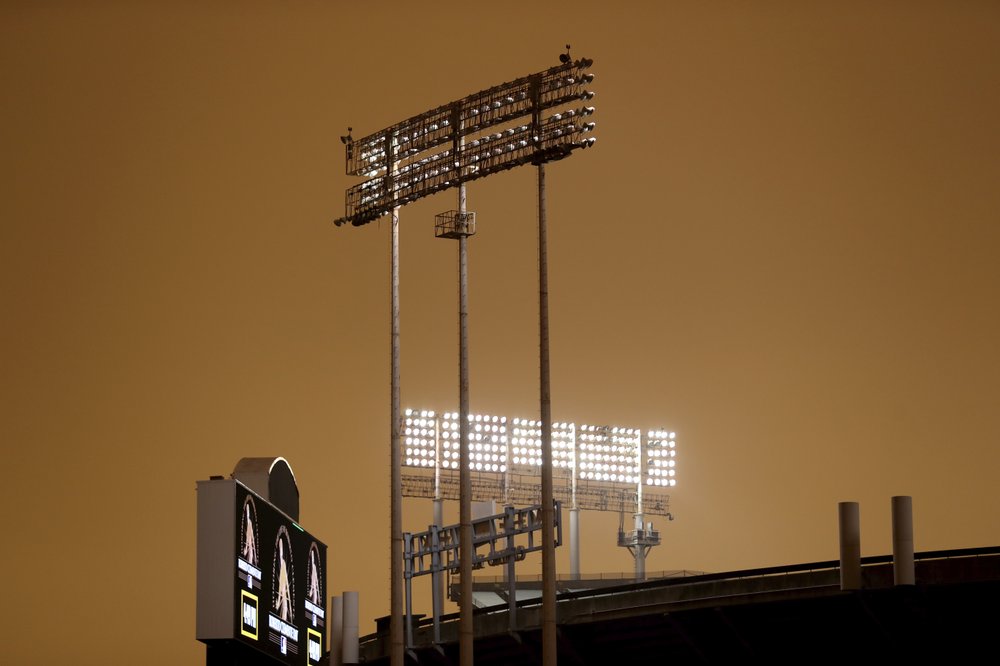 A look at what’s happening around the majors today:

Wildfires in Northern California have darkened the daytime skies over the Bay Area, leaving an orange-glowing haze above Oracle Park and the Coliseum. The smell of the fires wafted over the stadium as San Francisco hosted Seattle on Wednesday night and ash fell inside the ballpark this week when Oakland played.

The Athletics are set to close out a homestand with a series against Houston.

“There are fires all over the West Coast here and I was actually playing Jimi Hendrix today, ‘The Sky is Crying.’ The sky was crying today. I thought I was going to go outside and see Marlon Brando in ‘Apocalypse Now.’ It’s just a strange and eerie feeling,” he said.

Yankees star Gerrit Cole tries to end his three-game losing streak when he starts at home against Baltimore. He had won 20 straight regular-season decisions before this week.

In his last three starts, he’s allowed 14 runs on 17 hits and eight walks in 16 innings.

One night after setting a National League scoring record in their 29-9 romp over Miami, the NL East-leading Atlanta Braves look to keep their bats rolling when they visit last-place Washington in the opener of a four-game series.

Adam Duvall drove in nine runs with three homers Wednesday night, including a grand slam. Freddie Freeman had six RBIs and the Braves totaled 23 hits, including seven homers, to score the most runs in franchise history. They topped the old record by six runs. The outburst came a day after Atlanta was shut out by the Marlins on four hits.

Mike Yastrzemski and the San Francisco Giants go for their sixth straight victory when they open a four-game series at NL West rival San Diego, which has won four in a row. Chris Paddock (4-5, 4.75 ERA) pitches for the Padres. Both teams have taken eight of their last 10.

Madison Bumgarner (0-4, 8.44 ERA) is still looking for his first win with the Diamondbacks. The left-hander makes his second start since returning from a mid-back strain when skidding Arizona hosts the major league-leading Dodgers again. Bumgarner yielded two runs over four innings against the Giants, his former team, in his first start off the injured list. The struggling Diamondbacks have dropped 18 of 20.

The defending World Series champion Nationals will be without October star Howie Kendrick for a while. The 37-year-old Kendrick was put on the 10-day injured list Wednesday with a strained left hamstring, retroactive to Sunday. He is batting .275 with two homers and 14 RBIs in 25 games this season. Last season, Kendrick was the MVP of the NL Championship Series and hit the go-ahead homer in Game 7 of the World Series.