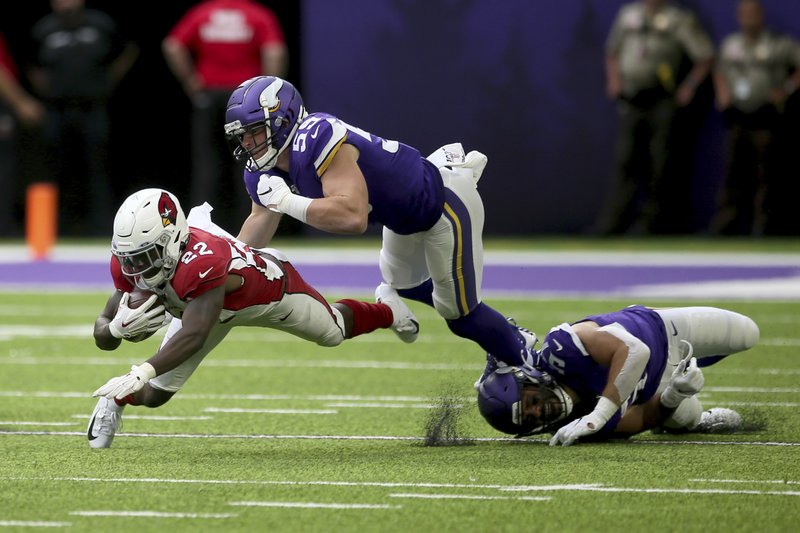 MINNEAPOLIS (AP) — No team in the NFC has allocated more salary cap space to the safety position than the Minnesota Vikings, who will rely even more heavily this season on their excellent yet expensive tandem of stalwart Harrison Smith and upstart Anthony Harris.

Their experience in a secondary that suddenly has a startling lack of it ought to be worth the investment for the Vikings and their remodeled defense.

The five-time Pro Bowl pick Smith, now the second-longest-tenured player on the team behind tight end Kyle Rudolph, was delighted by the return of Harris, who was given the franchise tag by the Vikings that prevented him from entering unrestricted free agency.

“It’s kind of more than just keeping one guy around. It’s a guy that can multiply, make guys around him better,” said Smith, who’s entering his ninth year. “Especially, it’s no secret that we have a young room, so it’s good to have a couple guys, as many guys as we can, that have a bunch of reps, some time together and some big moments.”

Trade speculation surrounded Harris this spring, considering the $11,441,000 salary the Vikings took on by tagging him made him their fifth-highest cap hit, according to figures compiled by the sports contract website Spotrac. Smith, whose deal expires after the 2021 season, is sixth at $10.75 million.

With more than 12% of their salary cap space carved out for safeties, only Denver with Kareem Jackson and Justin Simmons has committed to more. Kansas City, Baltimore and Tennessee are the only other NFL teams with more than 10% of their cap dollars doled out to safeties this year.

Harris, who led the league with six interceptions in 2019 in his first full season as starter to become Minnesota’s latest undrafted success story, could still wind up with a long-term contract.

“For anybody, in a dream world you want things to go completely your way. No hiccups or anything like that,” Harris said. “But honestly I wasn’t really worrying about it. I’ve always just been saying, ‘My destiny, it’ll come to me,’ and not really trying to worry about anything else.”

The Vikings not only have five players to replace from their most common defensive lineup last season, but eight of the top 18 defensive players in terms of snap counts have departed.

On the flip side, the five players who were on the field the most — Smith, Harris, linebackers Eric Kendricks and Anthony Barr, and defensive end Danielle Hunter — have all returned as the backbone of the group with a combined 12 selections to the Pro Bowl.

“Those guys are great communicators. They are extremely smart, and if you do have some younger guys on the outside they can get them lined up right. Along with Anthony Barr and Eric Kendricks in front of them, they’ve got guys around them that really know the defense,” co-defensive coordinator and linebackers coach Adam Zimmer said.

The Vikings have 15 defensive backs on their training camp roster, including seven rookies and three others with less than a full season of NFL experience. Smith and Harris are the only ones who were in the league prior to 2018.

With the departure of Andrew Sendejo and Jayron Kearse, all three backup safeties — Josh Metellus, Brian Cole II and Myles Dorn — are rookies. At cornerback, now that Xavier Rhodes, Trae Waynes and Mackensie Alexander are on new teams, Mike Hughes and Holton Hill are the senior members of the group beginning their third seasons. Rookies Jeff Gladney, Cameron Dantzler and Harrison Hand, along with second-year man Kris Boyd, will also be getting their indoctrination into head coach Mike Zimmer’s tough-love tutelage of cornerbacks.

“There’s a lot of new faces, a really young group, but I think it’s kind of cool to be a part of that as well because you’re going to see guys get things and catch on and grow,” Smith said, adding: “I can’t just show up and be like, ‘Boom, I’m here. Everything’s cool. I’m just going to roll it out and I’ll be good.’ I still have to start from square one myself and get the fundamentals, study. It doesn’t stop. You have your experience, but everybody is trying to beat me every day, so I constantly have to be proving myself, and it’s the same thing with new guys. They just don’t have any experience behind it. They’ll gain it, and some of ours will rub off on them. I’m excited about what we can do.”