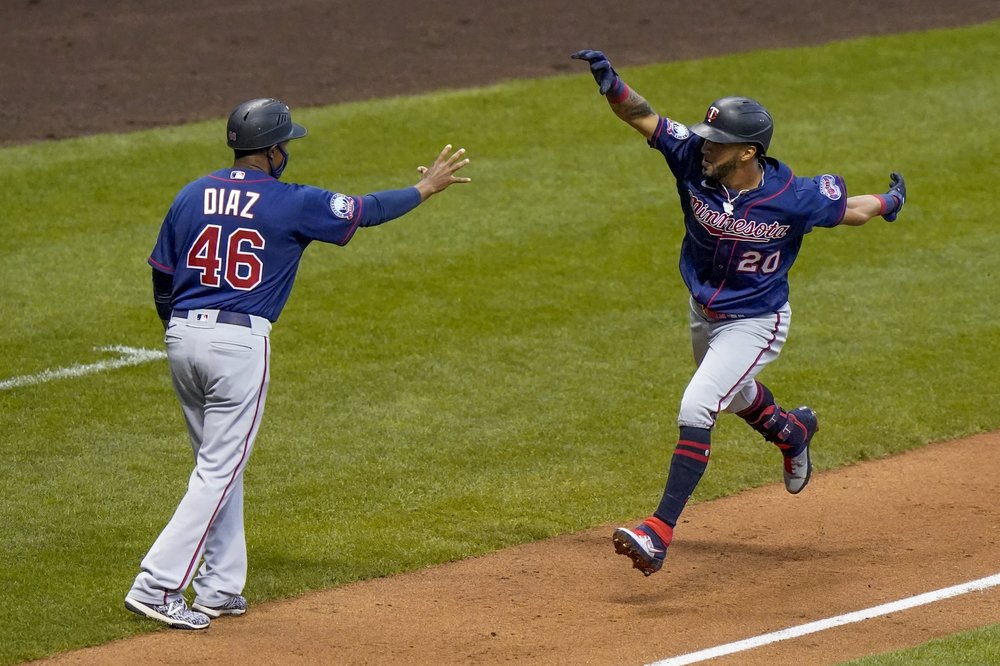 MILWAUKEE (AP) — Eddie Rosario and the Minnesota Twins needed one big hack to get back in the swing of things.

Rosario hit a grand slam in the third inning, Randy Dobnak turned in another solid outing and the Twins beat the Milwaukee Brewers 4-2 on Monday night to snap a four-game skid.

That slide matched the Twins’ longest losing streak from last season during their run to an AL Central title. Minnesota’s 2019 four-game skid covered the same dates (Aug. 6-9) as this year’s slump.

“We were all waiting for that clutch hit,” Rosario said. “Luckily I was able to connect tonight.”

Rosario’s shot erased an early 1-0 deficit and gave Dobnak and the Twins bullpen all the runs they needed.

Dobnak (3-1) allowed one run over five innings and retired his last eight batters to continue his hot start to the season. The right-hander has given up just two runs over 20 innings in his first four starts.

“I trust my stuff,” Dobnak said. “Every time I go out there, I have 100% confidence in my stuff, to pitch to the best of my ability and give my team a chance to win.”

Keston Hiura homered and Orlando Arcia hit an RBI double for the Brewers.

This game matched two starters who entered the night with ERAs below 1.00. Milwaukee’s Adrian Houser came in having yielded just one run over 12 innings.

The Brewers staked Houser to a 1-0 lead in the second as Orlando Arcia hit a two-out drive that eluded a leaping Rosario and went off the left-field wall for an RBI double. Arcia’s big hit snapped Dobnak’s string of 13 2/3 consecutive scoreless innings.

Alex Avila hit a leadoff single in the third and Max Kepler followed with an infield hit. After Jorge Polanco grounded into a fielder’s choice, Nelson Cruz was hit by a pitch.

That loaded the bases for Rosario, who blasted a pitch over the wall in right center for his fourth career grand slam.

“That’s vintage Rosey,” Twins manager Rocco Baldelli said. “That’s the kind of stuff he does. I think he really enjoys those situations. He doesn’t get timid when things start happening on the field, when there are people on base, when there’s big moments. It was very big for our group. It was a big pick-me-up and kind of elevated us to a good place energy-wise.”

“I thought it was an all right pitch in that situation,” Houser said. “I was trying to get a roll-over ground ball there. I don’t think I executed it exactly like I wanted to. Looking back on it, maybe I could have gone with a sinker, a stronger pitch. I still like the changeup there. I just didn’t execute it like I wanted to.”

Milwaukee star Christian Yelich singled and was left stranded at third in the bottom of the third inning, and the Brewers didn’t put another runner on base until Avisail Garcia hit a two-out single in the sixth.

The Brewers cut Minnesota’s lead to 4-2 when Hiura led off the eighth by homering to left center on an 0-2 pitch from Sergio Romo. The Brewers brought the tying run to the plate when Manny Pina hit a two-out double in the ninth, but Taylor Rogers struck out Mark Mathias to earn his fourth save.

Houser (1-1) pitched five innings and gave up only those four runs on Rosario’s grand slam. Freddy Peralta struck out eight and allowed only one hit and one walk in four innings of shutout relief.

BREWERS: Milwaukee activated INF Luis Urias from the injured list and started him at second base. Urias also should get plenty of opportunities at shortstop. It caps a long road back for Urias, who had surgery on his left wrist in January and then tested positive for the coronavirus at the start of summer camp. … 1B/OF Logan Morrison was designated for assignment. Morrison was hitting .120 (3 of 25) with one homer and two RBIs.

Twins: 3B Josh Donaldson has taken ground balls and is swinging the bat and running, but manager Rocco Baldelli cautioned that the team would remain cautious with him. Donaldson is on the injured list with a strained right calf. “They’re not injuries you really want to mess with,” Baldelli said. “You can’t really go out there and play with a calf that’s kind of coming back. It’s something that is going to have to be 100%.”

The Twins and Brewers continue their three-game series Tuesday in Milwaukee. Josh Lindblom (1-0, 4.15) will pitch for Milwaukee. Minnesota will start Tyler Clippard (0-0, 1.17).