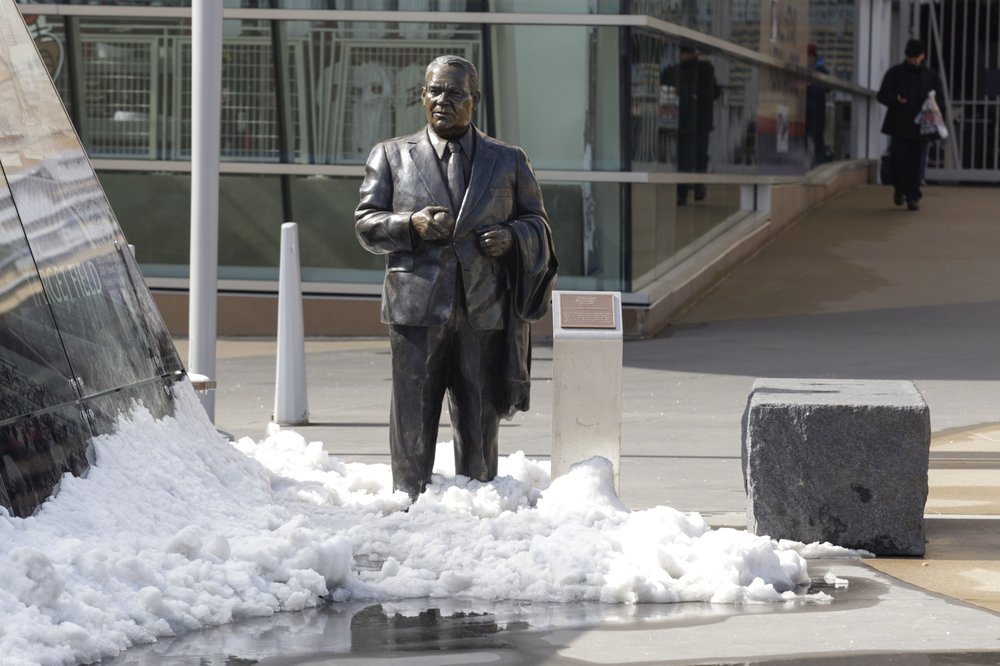 MINNEAPOLIS (AP) — The Minnesota Twins removed a statue of former owner Calvin Griffith at Target Field, citing his racist remarks in 1978 and saying the team could no longer “remain silent.”

Griffith’s statue was one of several installed when the team opened the ballpark in 2010. Its removal came on Juneteenth, the traditional commemoration of emancipation of enslaved African Americans, and on the same day as a statue of a former Washington Redskins owner was removed from outside the team’s old RFK Stadium.

“While we acknowledge the prominent role Calvin Griffith played in our history, we cannot remain silent and continue ignoring the racist comments he made in Waseca in 1978,” the Twins said in a statement Friday. “His disparaging words displayed a blatant intolerance and disregard for the black community that are the antithesis of what the Minnesota Twins stand for and value.”

Griffith moved the Washington Senators to Minnesota for the 1961 season, and the franchise was renamed the Twins.

During a speech in Minnesota to a Waseca Lions club in 1978, Griffith paused, lowered his voice and asked if there were any blacks around. Then he said, “I’ll tell you why we came to Minnesota. It was when I found out you only had 15,000 blacks here. Black people don’t go to ballgames, but they’ll fill up a rassling ring and put up such a chant it’ll scare you to death. It’s unbelievable. We came here because you’ve got good, hardworking white people here,” the Minneapolis Tribune reported.

“Our decision to memorialize Calvin Griffith with a statue reflects an ignorance on our part of systemic racism present in 1978, 2010 and today,” the Twins said. “We apologize for our failure to adequately recognize how the statue was viewed and the pain it caused for many people – both inside the Twins organization and across Twins Territory.

“We cannot remove Calvin Griffith from the history of the Minnesota Twins, but we believe removal of this statue is an important and necessary step in our ongoing commitment to provide a Target Field experience where every fan and employee feels safe and welcome.”

Spokesman Dustin Morse said the removal was an internal decision, but the team had “certainly heard from outside fans and the community over the years” about Griffith’s remarks.

Griffith sold the Twins to banker Carl Pohlad in 1984. Griffith died in 1999.

“We’re very honored that Calvin’s statue appeared at Target Field for 10 years, and we thank the Twins for that consideration,” said Clark Griffith, Calvin’s son. Clark Griffith, a business consultant in Minneapolis, said he had no further comment.

Twins Hall of Famer Rod Carew, whom Pohlad scorned as a “damn fool” in the Waseca speech for signing a contract that underpaid him, said he respected the decision to remove the statue. He recalled his anger at the time but said he later forgave Griffith.

“Now that more than four decades have passed, I look back on Calvin’s comments and our personal relationship with additional context and perspective,” Carew said in a statement through the team. “In my view, Calvin made a horrible mistake while giving that speech in 1978. I have no idea what happened that day, but who among us has not made a mistake? I know Calvin paid a heavy price for those comments and I believe his thoughts on race evolved over time.”

In Washington, the agency that manages RFK Stadium on Friday removed a statue of George Preston Marshall, who moved the team from Boston to Washington. Marshall resisted integrating the team with black players until “forced to do so” in 1962, according to his biography on the Pro Football Hall of Fame website. Marshall was inducted into the Hall in 1963; he died in 1969.

Events DC officials called the removal “a small and overdue step on the road to lasting equality and justice.” A Redskins spokesman did not immediately comment.

Statues of figures with racist pasts or deemed to be racist have been torn down around the U.S. in recent weeks following George Floyd’s death in May after a Minneapolis police officer held his knee on Floyd’s neck for nearly 8 minutes. A statute of Christopher Columbus was pulled down at the Capitol in St. Paul.

A statue of former Carolina Panthers owner Jerry Richardson, who was accused in 2017 of making sexually suggestive comments to women and a racial slur directed at a black team scout, was lifted from its pedestal outside the team’s stadium and taken away last week.