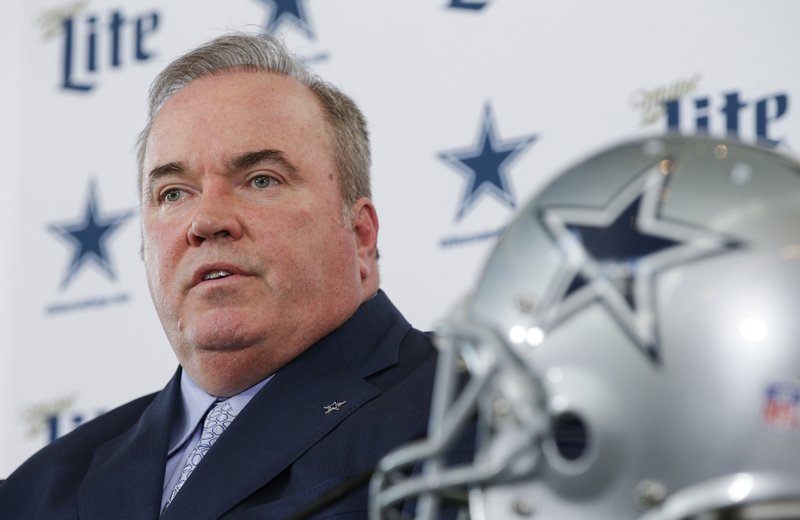 Mike McCarthy has spent most of his first offseason as coach of the Dallas Cowboys at home in Green Bay.

He’s also leaning on the experience of 13 years leading the Packers to help figure out how to implement a new program while the coronavirus pandemic prevents him from being in the same room with players or assistant coaches.

In the meantime, McCarthy sure is ready to get back to the Cowboys’ facility north of Dallas, particularly because live offseason practices would be happening now under normal circumstances.

“I have been with my family the whole time, except for maybe the first 10 days of the pandemic,” McCarthy said Wednesday in his first teleconference with reporters since the draft. “But I am anxiously preparing, frankly, to get back to Frisco as soon as possible. It’s time, I know, for me to get back.”

After a year away from the game following his firing in Green Bay, McCarthy replaced most of the coaching staff and geared up for the draft.

Two weeks after that, the Cowboys had their virtual rookie minicamp and have spent recent weeks in virtual meetings with veterans and first-year players under the NFL’s pandemic guidelines.

McCarthy said the emphasis has been on terminology and overall philosophy as coaches wait for on-field instruction time. And that’s where the experience of previous, more traditional offseasons in Green Bay comes into play.

“This challenge has clearly made everyone – especially myself – take a step back,” McCarthy said. “Don’t react as fast as you may have in normal times. I think you’ve really got to trust your instincts, the awareness and your experience in this particular time as far as how we install and initiate the development and growth of our program.”

Quarterback Dak Prescott hasn’t been part of the virtual meetings because he hasn’t signed the $31 million one-year tender under the franchise tag and is using his absence as leverage to get a long-term deal. The deadline for a multiyear contract is July 15.

After winning a Super Bowl with Aaron Rodgers in Green Bay nine years ago, McCarthy knows the development of his relationship with Prescott is among the highest priorities.

That’s also one place where McCarthy chose stability with his staff by retaining offensive coordinator Kellen Moore, who was Prescott’s backup for a year, then his position coach and finally the play caller last season.

“He’s involved in a business situation and I have full confidence he will be ready to go,” McCarthy said of the player the Cowboys consider a cornerstone of the franchise for years to come. “There has been communication. This is the way these business situations go sometimes and you respect that and have all the confidence it will work out.”

McCarthy has said he learned lessons from the lockout in 2011 in the months after winning the Super Bowl with the Packers, when he relied too much on word that the offseason wouldn’t be badly disrupted and didn’t spend enough time on contingencies.

This time, he said the Cowboys have a plan for camp in Oxnard, California, where they’ve trained most of the past decade, and a plan for camp at headquarters in Frisco in the increasingly likely scenario of the club not leaving the state.

McCarthy noted it was hard to know if the staff was behind on implementing a new program because he’d never been through anything like this.

“I think it’s obvious to think if we started April 6 like we normally would as a first-year program we would be in a different spot than we are here today,” the coach said. “I think our coaches have been very creative. I think the communication and correspondence with players have been excellent. The questions have been intuitive.”

McCarthy still hasn’t stood in front of his team and addressed everyone, and he said he doesn’t have the setup for the “90 boxes” on his computer screen. So in that first virtual meeting with the whole group, he tried to give his players a sense of who he is, what his philosophy will be, and what the priorities are.

And he’s ready for that first face to face.

“I think we’ve all been taught a whole different level of patience,” McCarthy said. “I’m anxious to get back, frankly. My family is probably anxious for me to get back. I’m really focusing on maximizing the time and the meeting time and the most important things we need to get done when we do get back together.”

For the time being, McCarthy’s new home is still his old home.

TOP PHOTO: FILE – In this Wednesday, Jan. 8, 2020 file photo ,New Dallas Cowboys head coach Mike McCarthy is introduced during a press conference at the Dallas Cowboys headquarters in Frisco, Texas. Mike McCarthy has spent most of his first offseason as coach of the Dallas Cowboys at home in Green Bay. He’s also leaning on the experience of 13 years leading the Packers to help figure out how to implement a new program while the coronavirus pandemic prevents him from being in the same room with players or assistant coaches. (AP Photo/Brandon Wade, File)