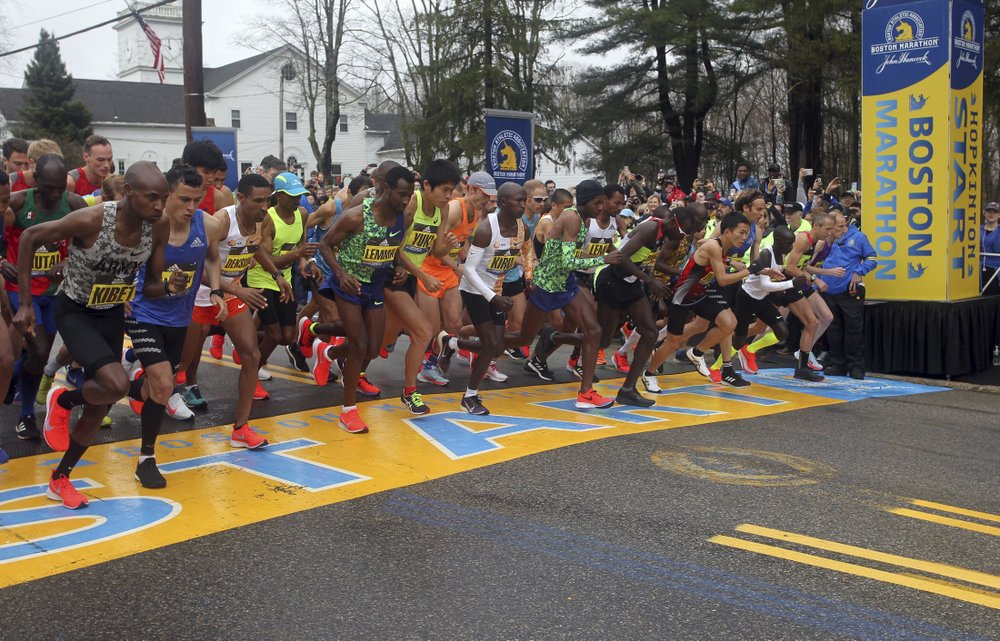 BOSTON (AP) — Organizers canceled the Boston Marathon on Thursday for the first time in its history, bowing to the social distancing requirements of the coronavirus outbreak and ending a 124-year run that had persisted through two World Wars, a volcanic eruption and even another pandemic.

The race, which draws a field of 30,000 and already had been postponed from April 20 to Sept. 14, will be replaced by a virtual event in which participants who verify that they ran 26.2 miles (42.2 km) on their own will receive their finisher’s medal.

“It became clear as this crisis developed that Sept. 14 was less and less plausible,” Mayor Marty Walsh said at a news conference outside City Hall, where runners traditionally gather for a pre-race pasta dinner.

“This is a challenge, but meeting tough challenges is what the Boston Marathon is all about,” Walsh said, invoking the response to the finish line bombings seven years ago. “It’s a symbol of our city’s and our commonwealth’s resilience. So it’s incumbent upon all of us to dig deep, like a marathon runner, like we did in 2013, and keep that spirit alive.”

Although the title of Boston Marathon champion is contested by a few dozen elite athletes, the field includes more than 30,000 recreational and charity runners, with as many as 1 million people lined up along the course trek from Hopkinton to Boston’s Back Bay. That presented organizers with a social distancing problem that won’t be solved by the fall.

“There’s no way to hold this usual race format without bringing large numbers of people into close proximity,” Walsh said. “While our goal and our hope was to make progress in containing the virus and recovering our economy, this kind of event would not be responsible or realistic on Sept. 14 or any time this year.”

The longest-running annual marathon in the world, the Boston Marathon began in 1897 when 15 men drew a starting line in the dirt in Ashland and headed for the city to commemorate the first modern Olympic Games the previous year. In 1918, the format was modified to a relay due to World War I; the 2013 race was stopped when two bombs exploded at the finish line, several hours after the winners had finished but while many recreational runners were still on the course.

Boston Athletic Association CEO Tom Grilk said the race also had to adjust when temperatures along the course approached 90 degrees Fahrenheit (32 Celsius) in 2012; ten years ago, ash from a volcanic eruption in Iceland grounded air travel and prevented many European runners from coming to Boston.

“There is a pretty rich history of accommodation and addressing reality. This is this year’s reality,” Grilk said.

“The spirit of Boston and the spirit of the Boston Marathon is to be strong and to be smart. When necessity drives you in a direction you might not have liked, you need to have the strength, the wisdom and the guidance from public officials to do what’s right.”

The race was scheduled in April on the state holiday to commemorate the battles in Lexington and Concord that marked the start of the Revolutionary War. Traditionally, the Red Sox have scheduled their first pitch for that morning so baseball fans could wander over to Kenmore Square after the game to see the runners pass by with one mile to go.

In announcing postponement in March, Walsh cited the desire to salvage the estimated $211 million pumped into the city’s economy each year. The B.A.A. and marathon runners also raise about $40 million for charity.

The B.A.A. said those who paid the entry fee for this year’s race can get their money back. They will also have a chance to participate in the virtual marathon, which they can run between Sept. 7-14. A downloadable “virtual toolkit” will include a printable finish line and winner’s tape.

Those who provide proof of a finish in less than 6 hours will receive a program, T-shirt, medal and runner’s bib.