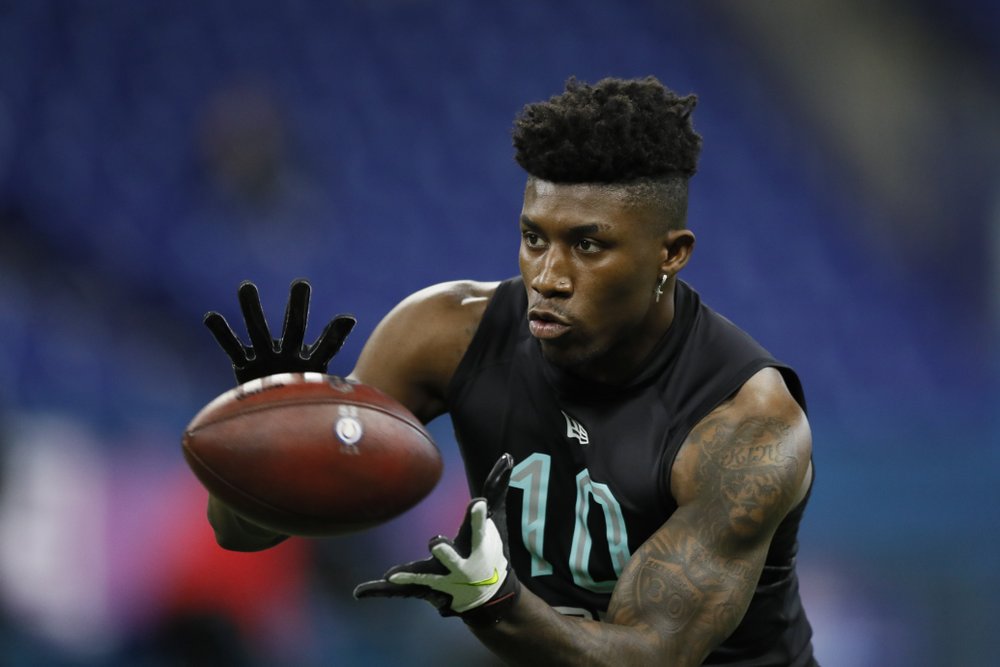 MINNEAPOLIS (AP) — The Minnesota Vikings patiently filled major needs on the offensive line and in the secondary with two more picks on Friday night, taking advantage of a deep draft without having to move up and adding three more selections for the final day for good measure.

Boise State offensive tackle Ezra Cleveland went to the Vikings in the second round at 58th overall, and Mississippi State cornerback Cameron Dantzler was their choice in the third round at 89th overall. Then they dealt the 105th pick, one of the compensatory selections at the end of the third round, to New Orleans for picks in the fourth, fifth, sixth and seventh rounds.

“You were kind of like, ‘Let’s hold our horses here and just be a little patient and see how things start to fall,’” general manager Rick Spielman said.

The 6-foot-6, 311-pound Cleveland posted some standout numbers at the scouting combine after three years as the starting left tackle for the Broncos.

The Vikings have two established tackles in Riley Reiff and Brian O’Neill, so if Cleveland proves to be a quick study Reiff could move to guard. Or Cleveland might slide inside for the time being.

The Vikings used their two first-round picks to fill voids at wide receiver (LSU’s Justin Jefferson) and cornerback (TCU’s Jeff Gladney). Jefferson went 22nd overall, the fifth wide receiver taken. Gladney was the 31st pick, after the Vikings moved down six spots in a swap with San Francisco that landed them extra selections in the fourth and fifth round.

After letting their top three cornerbacks from last season leave, the Vikings have places for Gladney and the 6-foot-2, 188-pound Dantzler to play right away. They’ll join Mike Hughes, Holton Hill and Kris Boyd at an especially young position group.

With a 6-foot-5, 260-pound frame, coming out of an SEC school in the middle rounds of the draft, the Minnesota Vikings had an ideal model in mind for South Carolina defensive end D.J. Wonnum.

Wonnum, who was Minnesota’s first pick on Saturday in the fourth round, will require plenty of development to even come close to the trajectory Hunter has been on since he was taken in the third round out of LSU in 2015. The Vikings have long believed in and benefited from their ability to maximize production out of defensive players, though, so Wonnum made plenty of sense at the 117th overall selection. The departure in free agency of starter Everson Griffen and backup Stephen Weatherly made that position important to fill through the draft.

“Definitely, the measurables are close. I think Danielle might have been a little bit faster as far as straight-ahead 40, but this guy is a self-made … leader,” college scouting director Jamaal Stephenson said. “We had a chance to talk to his head coach down there, and they just raved about the kid.”

“He told me I had the tools. I’ve just got to bring it out of me,” Wonnum said.

Thirteen picks after Wonnum, the Vikings added another promising prospect for their front four with Baylor defensive tackle James Lynch. He accumulated 22 career sacks in three seasons, including 13 1/2 sacks in 2019, both program records. The Vikings still have Shamar Stephen and some other draft picks from recent years in the mix at the position known in schematic jargon as the 3-technique, but Lynch ought to push for playing time immediately.

“I feel like playing inside is my natural position, and I bring a mismatch to offensive guards and whoever I’m going against,” Lynch said. “I can do different things to confuse them and try to get to the quarterback as fast as I can.”

After making two picks in the first round on Thursday, one in the second round and one in the third round on Friday, the Vikings started on Saturday with a whopping 13 selections. They wound up with 11 players, stashing two picks away for 2021 in trades with Chicago (fourth round) and Baltimore (fifth round). They now have three fourth-rounders next year.

With 15 players, the Vikings made more picks than any team since the draft was trimmed to seven rounds in 1994. Cleveland made 14 selections in 2016. General manager Rick Spielman, who has long valued quantity in the draft, was glowing afterward — particularly given the extra challenge of conducting the entire operation via video conferencing due to the coronavirus-imposed sequestering at home for all staff.

“We did not have any glitches at all throughout the whole process,” Spielman said.

The Vikings largely addressed their most pressing needs, starting with three cornerbacks and two safeties. They chose three offensive linemen, though Hinton, from a Division II program, was the only guard, the spot of greatest concern. Dru Samia, a fourth-round pick last year, will figure heavily into the interior competition with Pat Elflein, Dakota Dozier and perhaps Hinton.

The Vikings made Stanley, a three-year starter who went 27-12 and finished second in program history with 68 career touchdown passes, their first quarterback drafted since Teddy Bridgewater in the first round in 2014. The last time the Vikings used a pick after the first day of the draft on a quarterback was John David Booty in the fifth round in 2008. Stanley, who will compete with Jake Browning for the No. 3 spot behind Kirk Cousins and Sean Mannion, threw only 23 career interceptions in an offensive scheme at Iowa with some similarities to the Vikings.

Osborn will factor in to the mix at a suddenly inexperienced wide receiver group beyond Adam Thielen that was enhanced on Thursday by LSU’s Justin Jefferson with the 22nd overall pick. Osborn also has significant special teams ability, including returning both kickoffs and punts, and his off-the-field interests are among the most unique of this class.

He’s been pursuing his master’s degree in criminal justice, with a post-football goal of working for the FBI or the Secret Service.

“I’m not really sure if I should be announcing that,” he said, jokingly, then adding: “I want to be the guy going in there helping save lives and protect the president and protect the country.”

TOP PHOTO: FILE – In this March 1, 2020, file photo, TCU defensive back Jeff Gladney runs a drill at the NFL football scouting combine in Indianapolis. Gladney was chosen by the Minnesota Vikings in the first round of the NFL draft. (AP Photo/Charlie Neibergall, File)