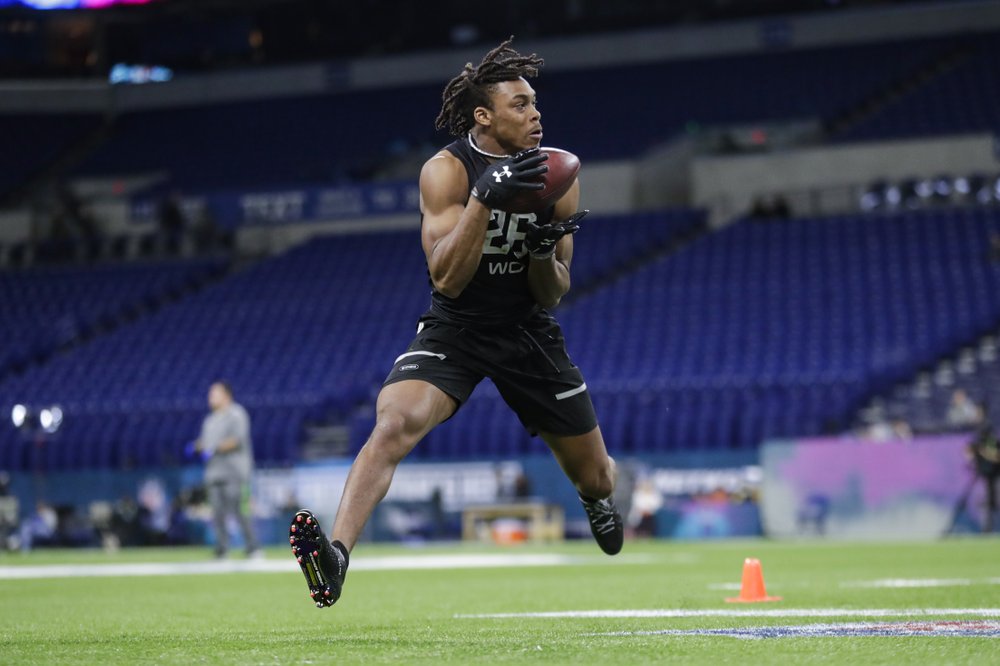 MINNEAPOLIS (AP) — Justin Jefferson was a late-blooming wide receiver who claimed the last scholarship for LSU’s freshman class in 2017 before finishing his college career as a national champion with the school record for receptions.

The Minnesota Vikings will be counting on more of that swift progress.

Filling two significant needs in the first round of the NFL draft, the Vikings chose Jefferson with the 22nd selection on Thursday night and traded down to take TCU cornerback Jeff Gladney at No. 31.

The Jefferson pick came from Buffalo as part of the trade made last month that dealt restless wide receiver Stefon Diggs and netted the Vikings three extra choices. They wasted no time trying to find a replacement with Jefferson, who was the fifth wide receiver to come off the board in an especially deep class at the position.

“I was very small, undersized, lightly recruited, the whole thing,” Jefferson said, reflecting on his journey from high school in the New Orleans area. “I definitely didn’t think that this would be coming at all.”

Jefferson, who played primarily in the slot while helping Tigers quarterback Joe Burrow win the Heisman Trophy, led all FBS players as a junior in 2019 with 111 catches. Jefferson, who had 1,540 receiving yards with 18 touchdowns in 15 games last season while rarely dropping a pass, will join Adam Thielen and Tajaé Sharpe as the top down-field options for quarterback Kirk Cousins.

Thielen’s most natural spot is also in the slot, but he’s a versatile route runner, just as Jefferson proved to be in college. The 6-foot-2, 185-pound Jefferson played mostly on the outside in 2018, He was clocked in the 40-yard dash at the combine in 4.43 seconds.

“You’ve seen the speed after the catch, but when he went and ran in the 4.4s at the combine that just elevated him more,” Vikings general manager Rick Spielman said.

The Vikings sent the 25th selection to San Francisco and moved down six spots to No. 31 for Gladney while gaining additional picks in the fourth and fifth round. They have 12 selections over the final two days of the draft, though more trading is all but certain.

The 5-foot-10, 191-pound Gladney is the type of quick, fierce cornerback that coach Mike Zimmer has long coveted for his defense. Gladney, who led the Big 12 with 14 pass breakups last year, is the the second cornerback picked by the Vikings in the first round in three years, along with Mike Hughes (2018). That’s the position that Zimmer has long specialized in developing, so he’ll have to put his teaching to good use again.

“I can take coaching. It doesn’t matter how they deliver it. I just get the message,” Gladney said.

“He said, ‘I’ve been waiting for you guys to call,’” Zimmer said. “That’s part of the things that you like about him. He’s a competitor.”

The virus outbreak that shuttered all NFL facilities forced team officials to sequester in their homes for this most unusual draft, with Spielman directing the show from his study in the Twin Cities area and Zimmer logged in from his ranch home in Kentucky. The all-virtual nature of spring practices will likely make the transition process for rookies this year a rockier one, but the reality of the roster will force the Vikings to lean on at least a few of them at key positions.

Five spots in the most common defensive lineup opened through expired contracts and cap-savings cuts, including cornerbacks Xavier Rhodes, Trae Waynes and Mackensie Alexander. Hughes and Gladney will fill two of those voids, with Holton Hill and Kris Boyd also in the mix.

This will be a pivotal draft for Zimmer and Spielman, both of whom have entered the final year of their contract and yet to receive an extension. The Vikings have made the playoffs three of the last five seasons, but the 2017 team that reached the NFC championship game has so far been the pinnacle.

This is the 10th draft for Spielman with full authority over the roster. The last time he used the first round pick to take a wide receiver was 2016, when Laquon Treadwell landed at No. 23 out of Mississippi. He was a major bust, with just 701 yards and two touchdowns over four seasons.

TOP PHOTO: FILE – In this Feb. 27, 2020, file photo, LSU wide receiver Justin Jefferson runs a drill at the NFL football scouting combine in Indianapolis. Jefferson was selected by the Minnesota Vikings in the first round of the NFL draft. (AP Photo/Michael Conroy, File)

0
0   0
previous NCAA moves toward allowing athletes to be paid sponsors
next For all the changes, NFL draft kind of looked, well, normal
Related Posts