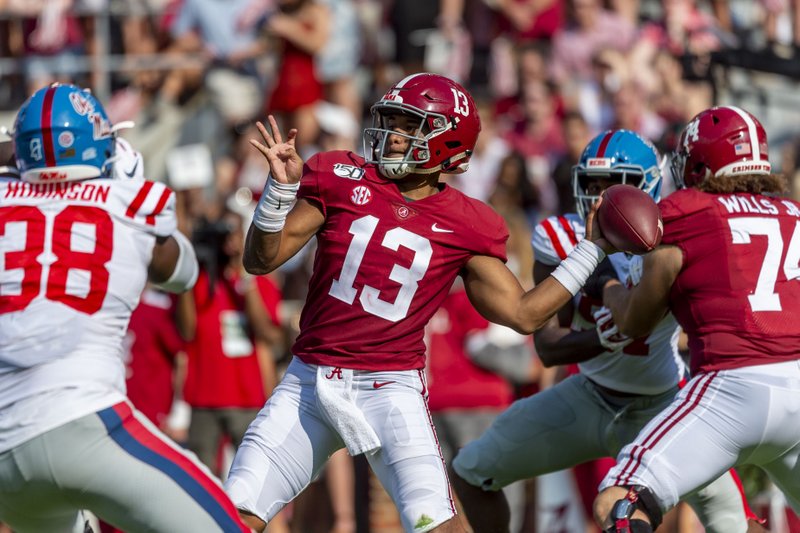 Look for 3 QBs in first 5 picks of NFL draft

Look for 3 QBs in first 5 picks of NFL draft

Talk about virtual drafts, what is a mock draft, really? Make believe.

The upcoming NFL remote draft beginning Thursday night has a touch of irony to it. The producers of said mock drafts rarely are even remotely accurate.

That said, here’s one view of what might happen in the opening round. This mock draft does not include trades, of which there could be several. Sticking with the existing grid, the Colts, Steelers, Bears, Rams, Bills and Texans don’t have a selection.

Best player in this draft is Chase Young. Redskins will get lots of offers, especially from teams seeking QB. If they aren’t tempted enough, they go with chalk …

Lions will get even more pressure to deal this spot with two highly regarded quarterbacks available. Guess what: Matthew Stafford comes off major injury, has gotten beaten down through years, and has difficult family issues. So whether they trade it or keep it …

So many needs, but hard to see Giants ignoring stud linebacker with winning credentials to build defense around.

Dolphins supposedly were tanking for Tua last year, yet won enough games to fall to fifth in the order. That doesn’t mean they will ignore a passer here.

Having missed out on top three QBs, Chargers are dumbfounded. They will attempt to trade down for more picks and still get a passer later on. If not, how about the best defensive back in this draft, even though it’s not major need?

Just like Panthers, Cardinals must dive deep into defensive picks, but not here. They address major hole on offensive line with …

First of two opening-round picks for rebuilding Jags, who can get desired offensive tackle later on and address D here.

Browns would love to get left tackle here. They haven’t been secure there since Joe Thomas, the best player at the position of last decade, hung it up.

GM Joe Douglas has vowed to get protector and playmaker for QB Sam Darnold. Best wideout in this deep draft at that position is available, and coach Adam Gase is drooling. But the quality of blockers in second next round is too much lower to pass on …

Raiders also will select at No. 19. Packaging their two picks to move up is not out of question, but going here will net them …

How nice. Go to Super Bowl, then make deal for this spot to go with later pick. Niners want dynamic target for Jimmy Garoppolo to go with last year’s breakthrough rookie, Deebo Samuel.

That soon-to-be 43-year-old quarterback who came in from up north will appreciate this left tackle as bodyguard.

Broncos had productive second half of 2019, believe they can push toward top of AFC West dominated by Chiefs. Dynamic playmaker helps.

Pass rush has disappeared, as has most of Atlanta’s defense. Dan Quinn’s job depends on quick turnaround by that unit.

Cowboys also are in market for someone to get to opposing QBs, and also could use boost in secondary. Regardless, they go defense here.

Dolphins got their passer, and with their second of trio of first-rounders, they can’t pass on protection for Herbert — from one of his college opponents no less.

Having grabbed outside threat at receiver, it’s time for Mike Mayock and Jon Gruden to fill hole at linebacker. Some might see this as reach. We don’t.

Time for that offensive tackle mentioned above for Jags.

Pick acquired for WR Stefon Diggs, which could wind up in replacement for Diggs.

Grab QB of future here with Tom Brady off to Tampa? Patriots coach believes he could win with Ryan Leaf.

Few teams have as talented a roster as Saints. So they can look ahead at their most important offensive position.

With Diggs replaced, time to address secondary. Another Crimson Tide standout in this spot — and Diggs’ younger brother to boot.

Last decade’s best coach-GM combo was Pete Carroll and John Schneider. Their first pick of this decade is …

NFL’s top team in regular season has few weaknesses. One worth looking at is linebacker, where there’s no Ray Lewis or Terrell Suggs on board.

After falling one win short of AFC title, Mike Vrabel bolsters defense. That could be on Titans line now without Jurrell Casey, or secondary missing Logan Ryan.

Another chance to enhance strong roster. With Ruggs in hand, future replacement for standout LT Joe Staley might make sense but also is reach. Instead …