Home NEWS A virus rages, a flame goes out: Tokyo Games reset for 2021 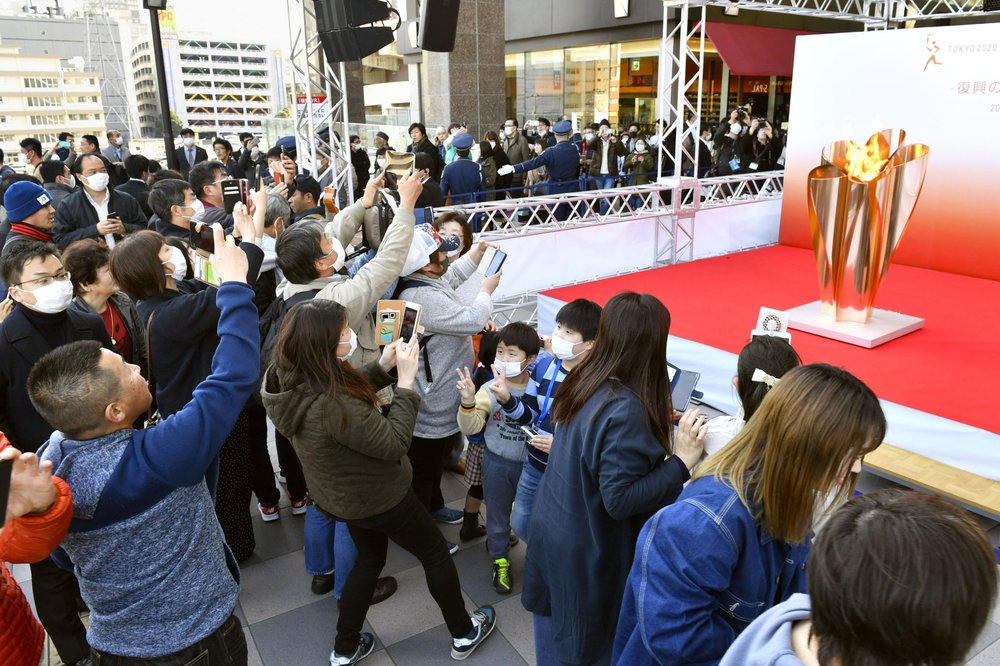 A virus rages, a flame goes out: Tokyo Games reset for 2021

A virus rages, a flame goes out: Tokyo Games reset for 2021

Not even the Summer Olympics could withstand the force of the coronavirus. After weeks of hedging, the IOC took the unprecedented step of postponing the world’s biggest sporting event, a global extravaganza that’s been cemented into the calendar for more than a century.

The Tokyo Games, slated for 11,000 athletes from more than 200 countries and at a reported cost of $28 billion, had been scheduled to start July 24. They will now be pushed into 2021 on dates to be determined.

They will still be called the 2020 Olympics — a symbolic gesture that the International Olympic Committee hopes will allow the games to “stand as a beacon of hope,” as it stated in delivering the news Tuesday.

“I don’t think anybody was really prepared for this virus happening,” said American sprinter Noah Lyles, who had been primed to be one of the world’s breakout stars in Tokyo. “You look over the history of the Olympics and see that it’s usually war that’s stopped the Olympics from happening.”

Now, a microscopic virus that is wreaking havoc with daily life around the planet, to say nothing of its sports schedule, has accomplished what no other virus (Zika in 2016), act of terrorism (the killing of Israelis in Munich in 1972), boycott (1980 and 1984), threat of war (frequent) or actual world war itself has managed to do: postpone the games and push them into an odd-numbered year.

For most people, the new coronavirus causes mild or moderate symptoms, such as fever and cough that clear up in two to three weeks. For some, especially older adults and people with existing health problems, it can cause more severe illness, including pneumonia and death. The global pandemic has sickened at least 420,000 people and killed more than 18,000 worldwide, according to Johns Hopkins University.

“To all the athletes: take a breath, regroup, take care of yourself and your families. Your time will come,” she wrote on Twitter.

When will that time be?

Nobody knows yet. It was a big part of the reason the IOC refused to announce a postponement that was becoming more inevitable with each passing day. Major sports organizations, including World Athletics and the gymnastics, track and swimming federations in the United States, were calling for a delay. So were major countries, including Canada, Brazil and Australia.

Even more compellingly, athletes were raising their voices. They were speaking to the unfairness of not being able to train, fearful that a trip out of the house could put them, or someone in their hometown, in jeopardy. And what of their competitors, some living halfway around the world, who might not have as many restrictions, and could be getting a leg up? There were fears about the eroding anti-doping protocols caused by virus-related restrictions and qualifying procedures that were disintegrating before their eyes.

“A bittersweet victory for athletes,” one group, Global Athlete, called the decision. “On one hand, their Olympic dreams have been put on hold. On the other hand, athletes have shown their power when they work together as a collective.”

With IOC President Thomas Bach guiding the process, the committee had said as recently as Sunday that it might take up to four weeks for an announcement to come. It took two days.

But make no mistake, there are still weeks of difficult planning ahead.

Many of Tokyo’s arenas, stadiums and hotels are under contract for a games held from July 24 to Aug. 9. Remaking those arrangements is doable, but will come at a cost. There are also considerations beyond the top-line price tag. Among them: The $1 billion-plus the IOC was to receive from broadcast partner NBC; the millions in smaller athlete endorsement contracts that are now in limbo; the budgets of the individual national Olympic committees; the availability of the 80,000 volunteers who signed up to help.

“People are having a problem calling off weddings, and calling off little tournaments, so imagine with all the billions of dollars that’s gone into this,” five-time Olympian Kerri Walsh Jennings told The Associated Press. “They have a grieving process to go through. They have so many moving parts to think about.”

There’s also the matter of the international sports schedule. Nearly all 33 sports on the Olympic program have key events, including world championships, on the docket for 2021. Hayward Field at the University of Oregon was rebuilt and expanded at the cost of around $200 million to hold next year’s track and field world championships. Now that event will likely be rescheduled.

“Of course there’s going to be challenges,” said Paul Doyle, an agent who represents about 50 Olympic athletes. “At the same time, this is what had to happen.”

It came together during a meeting Tuesday among Bach, Japanese Prime Minister Shinzo Abe and a handful of other executives from the IOC and Japan’s organizing committee.

Among the first casualties of the IOC’s impeccably curated timeline was the torch relay. Organizers were planning to start the journey through the host country in the northeast prefecture of Fukushima on Thursday, albeit with no fans and no torchbearer. Instead, the flame will be stored and displayed, with its next move to be determined later.

Just one of hundreds of difficult changes the IOC leaders have to make in the upcoming weeks and months.

But the most difficult decision is behind them.

The unspoken irony in it all is that when Japan was awarded the games in 2013, it came on the strength of a campaign in which it positioned itself as “the safe pair of hands.” It was a time when the world was still emerging from the Great Recession, and the Olympic movement was especially sensitive to the runaway expenses the Summer Games were incurring.

Japan, like every host before it, had trouble sticking to the budget. Nevertheless, seven years later, and through no fault of its own — in fact, Japan is one of the countries that appears to be avoiding the worst of the coronavirus — Tokyo residents are watching their grand plans for 2020 implode.

So, onto 2021. As far as the Olympic world — and perhaps the world at large — is concerned, it can’t get here soon enough.