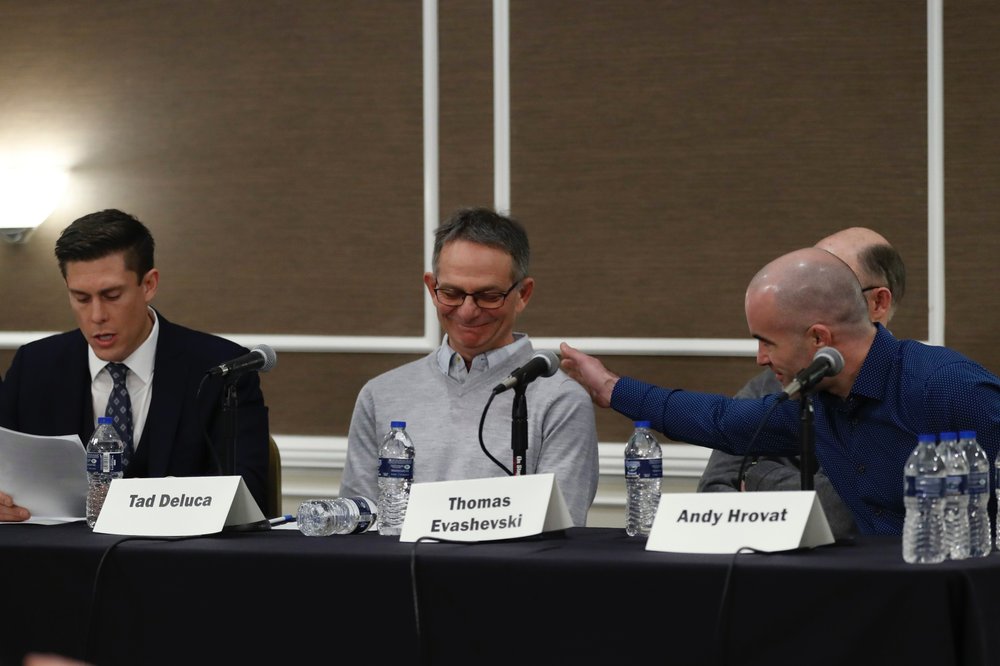 SOUTHFIELD, Mich. (AP) — The whistleblower whose letter to University of Michigan athletic director Warde Manuel alleging sexual assault sparked an investigation into a former school doctor says he was inspired by the women who testified against convicted Michigan State physician Larry Nassar.

An attorney for Tad DeLuca said Thursday that his client complained to his wrestling coach in 1975 that Dr. Robert E. Anderson molested him during medical exams. In response, then-coach Bill Johannesen humiliated DeLuca, kicked him off the team and effectively removed his financial assistance, the attorney said.

“I spoke up again by letter in 2018 after hearing an NPR story about the MSU gymnasts, women who I am in awe of,” DeLuca said at a news conference in suburban Detroit. “Once again, the University of Michigan ignored me.

“I’m here today to speak up again, to let the University of Michigan know that I will not be ignored.”

DeLuca’s 2018 letter of complaint about Anderson, now deceased, led to a university police investigation that became public last week. Two other former Michigan wrestlers who allege they were abused by Anderson also spoke to reporters Thursday: Tom Evashevski and Andy Hrovat, the first athlete to publicly say Anderson molested him.

Evashevski was in school with DeLuca at Michigan in the mid-1970s. Hrovat was a star wrestler in the late 1990s for the Wolverines and went on to compete for the U.S. at the 2008 Olympics.

DeLuca put his complaints about Anderson in writing in 1975 in a letter to Johannesen. Subsequently, Johannesen read DeLuca’s letter to his teammates in an effort to humiliate him, kicked him off the team and took away his scholarship, according to Stinar.

Johannesen denied in interviews this week with The Associated Press that any of his student-athletes ever told him Anderson touched them inappropriately.

“You can’t call him a coach,” said DeLuca, a retired teacher in northern Michigan. “‘Coach’ is a term of endearment.”

Hours after the news conference, the University of Michigan released a statement.

“The three brave men who came forward today to share their stories delivered a powerful message,” the statement read. “We want to encourage everyone harmed by Robert E. Anderson or who has evidence of his misconduct to come forward. At the University of Michigan, we want to hear your voices.”

School officials have acknowledged some school employees were aware of accusations against Anderson prior to DeLuca’s 2018 complaint. Last week, the university’s president apologized to “anyone who was harmed” by Anderson and offered counseling services.

The school launched an investigation into the doctor’s behavior following abuse allegations from five people and also established a hotline for those who came into contact with Anderson.

“Everybody who was abused by this doctor, the doctor everyone knew was doing this, was abusing athletes and students, should speak up and let everyone know they will not be ignored,” DeLuca said. “It just, it has to stop. Period.”

“This is the first time we have heard this information,” Superintendent Jeanice Swift said.

The Flint district said it confirmed that someone with Anderson’s name was an employee at some point, but “we do not have information about his employment history.”

“We encourage anyone with information regarding this matter to contact local law enforcement,” the district said.

TOP PHOTO: Tad Deluca, center, listens as attorney Parker Stinar addresses the media during a news conference, Thursday, Feb. 27, 2020 in Southfield, Mich. Deluca, a University of Michigan wrestler from the 1970s says he was kicked off the team and lost his financial aid after complaining to a coach that he had been abused by a sports doctor. Deluca identified himself as the whistleblower whose 2018 complaint about the late Dr. Robert E. Anderson led to a police investigation. (AP Photo/Carlos Osorio)