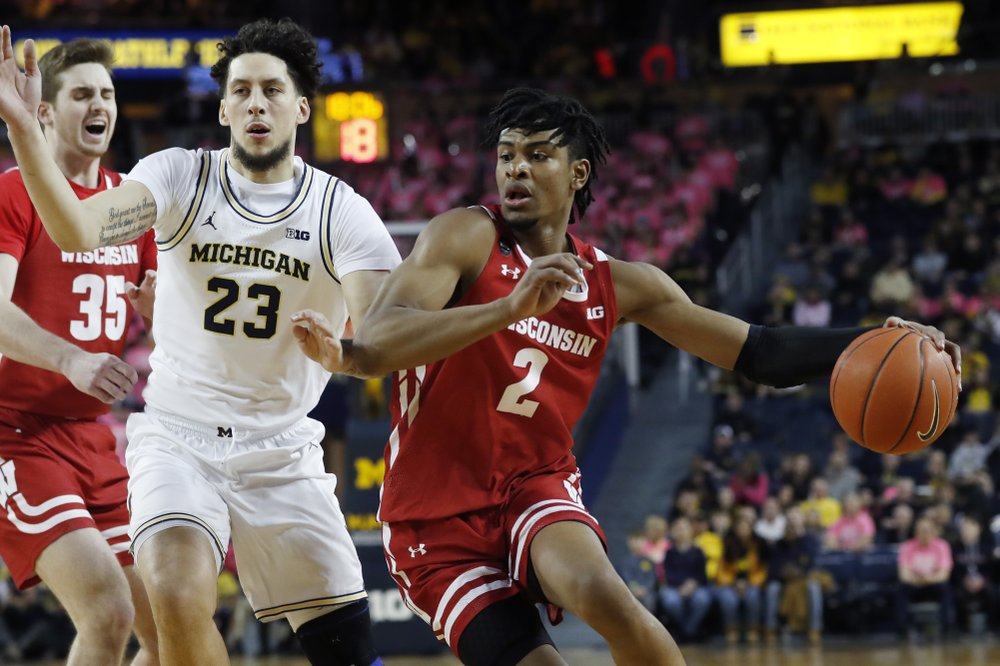 ANN ARBOR, Mich. (AP) — Wisconsin inbounded the ball and D’Mitrik Trice spent a few seconds dribbling on the perimeter. Then he passed to a teammate, who passed back.

After a bit more dribbling, there wasn’t much time for Trice to do anything but shoot.

“I knew that I was going to be able to attack or create for somebody else, or find my own shot,” Trice said. “He was sagging off a little bit, so I just took the shot with confidence, and it went in.”

Trice’s 3-pointer late in the second half put the Badgers up by six, and they held on for an 81-74 victory over No. 19 Michigan on Thursday night. Trice finished with 28 points for Wisconsin, which snapped the Wolverines’ five-game winning streak and extended its own winning streak to five.

The Badgers (18-10, 11-6 Big Ten), who are now in a four-way tie for second place in conference, never trailed in the game and repelled every Michigan push in the second half. The Wolverines cut a 14-point deficit to three, but after a Wisconsin timeout with 2:50 remaining, Trice sank his 3-pointer to double the lead.

Down by four, Zavier Simpson of the Wolverines was fouled with 27.1 seconds left. He made the first free throw and missed the second, and Michigan’s Brandon Johns came up with the rebound and was fouled. But he missed the front end of a 1-and-1, and Wisconsin held on.

Simpson scored a career-high 32 points for the Wolverines (18-10, 9-8), who were without guard Eli Brooks because of a broken nose.

Trice made his first five shots from the field and the Badgers shot 63% in the first half. They were up 43-33 at halftime.

Michigan scored the first eight points of the second half, but Wisconsin answered with a 10-2 run to go back ahead by double digits. It was 59-45 with just over 12 minutes left.

It was 70-67 after a layup by Simpson, and Wisconsin took a timeout. There wasn’t much ball movement on the next possession, but that didn’t matter when Trice let a 3 fly from the left wing and it went in.

“You could tell that they focused in on their scouting report,” Wolverines guard David DeJulius said. “Zavier, he got down in the paint and wreaked havoc a little bit. But other than that we didn’t really get much and they defended us well from the 3-point line.”

Wisconsin: The Badgers have won 19 of their last 25 games against Michigan, and this was an impressive showing in a matchup of Big Ten teams that have both played well lately. Wisconsin is surging down the stretch, winning six of its last seven since La Crosse native Kobe King left the program around the end of last month.

“I told them in there — 60 days ago, this wouldn’t have been possible,” Badgers coach Greg Gard said. “We weren’t ready to come into this environment against a good team and be able to finish out a game on the road. It just shows the maturity and shows the leadership in the locker room that we have with our older guys.”

Michigan: With Brooks sidelined, the Wolverines weren’t at their best defensively and fell too far behind against a team that doesn’t make many mistakes.

The Badgers have had a different player lead the team in scoring in each game of their current winning streak.

With Brooks out, the Wolverines started Johns, a forward. That meant every Michigan starter except Simpson was at least 6-foot-7.

“I wanted to make sure that I did not have David and Zavier in there at the same time starting, because they’re our two primary ball handlers,” coach Juwan Howard said. “(If) both get one quick foul, then we’re in trouble.”

The Wolverines did not get off to a good start, falling behind 19-9.

The Badgers were pretty far down the list of others receiving votes this week, but they’re building a case to move into the Top 25. Michigan may drop out after a home loss.

Michigan: The Wolverines play at No. 23 Ohio State on Sunday. The Buckeyes beat Michigan 61-58 on Feb. 4.