Home NEWS COLLEGE Gillespie leads No. 15 Villanova past No. 18 Marquette 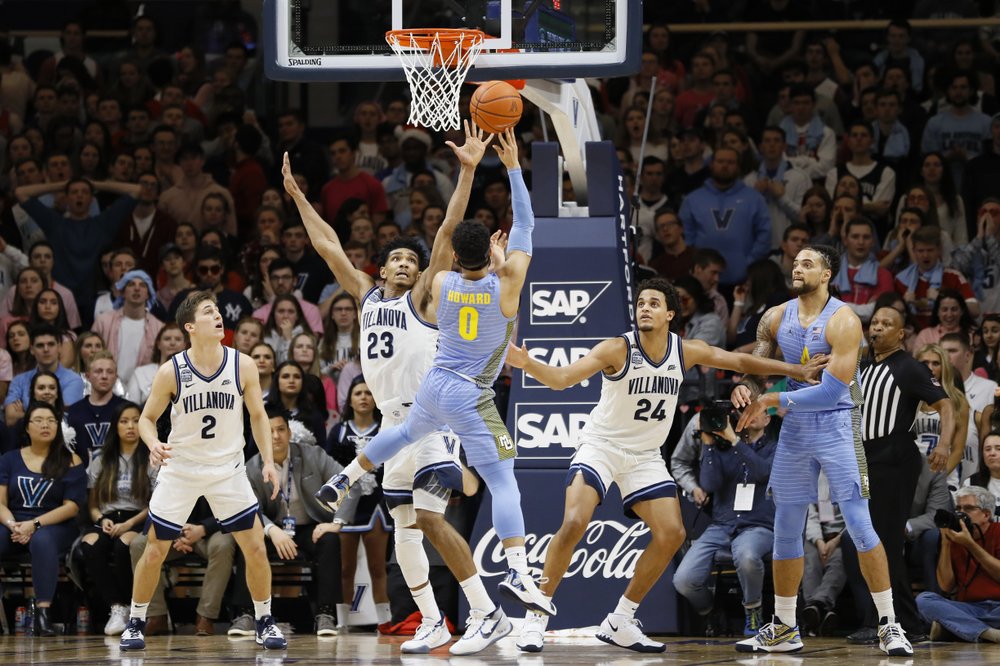 Gillespie leads No. 15 Villanova past No. 18 Marquette

Gillespie leads No. 15 Villanova past No. 18 Marquette

VILLANOVA, Pa. (AP) — On a night Villanova retired the jersey of one of its greatest point guards, its current point guard came through in the clutch.

Collin Gillespie had 14 points and hit a pivotal 3-pointer with 2:03 remaining, Jeremiah Robinson-Earl had 17 points and 11 rebounds and No. 15 Villanova held on for a 72-71 victory over No. 18 Marquette on Wednesday night to snap a three-game losing streak.

Gillespie added five rebounds and four assists, but his shot taken just a few feet from where former Wildcats standout Ryan Arcidiacono was sitting was his biggest play of the night.

“I just try to be a leader and lead by example,” Gillespie said.

The Golden Eagles had trimmed Villanova’s 18-point second-half lead to five points with 3:58 left before Villanova scored the next five, capped by Gillespie’s 3, to take a 10-point lead and get some needed breathing room.

“Collin runs the show,” Villanova coach Jay Wright said. “He finds people and he had a huge shot, too.”

Jermaine Samuels added 14 points for Villanova (18-6, 8-4 Big East). The Wildcats had surrendered an average of 75 points in defeats to Creighton, Butler and Seton Hall — all teams currently ranked in the AP Top 25. Villanova, which pulled into a second-place tie with Creighton in the Big East, avoided losing four in a row for the first time since Feb. 15-25, 2012.

The Wildcats led by as many as 15 points in the first half and came out strong to open the second half. Villanova scored the first nine points after the break, five of which came from the free-throw line, to lead 47-29 with 16:27 remaining. Marquette continued a pattern from the opening 20 minutes by missing its first six shots after the break.

Wojciechowski went to his bench, and the Golden Eagles slowly cut into the Villanova advantage.

Even after Gillespie’s 3, Marquette wasn’t quite done. Howard’s 3 with 43 seconds left pulled the Golden Eagles within 71-68. After Saddiq Bey missed, Villanova intentionally fouled Howard. He missed the first and then failed to hit the rim while trying to miss the second, giving the ball to Villanova. Robinson-Earl then made the second of two free throws with 4 seconds left before Howard drained a 3 at the buzzer.

“They played together and competed together,” Wojciechowski said of the reserves he called on in the second half. “They gave us a chance to win a game we had no business winning.”

“Markus has had a historical career,” Wojciechowski said. “But I can tell you he’s not in the locker room right now thinking at all about those records. When his career is over — hopefully that’s a long way down the road — he’ll be able to take in the history that he’s created at Marquette and in the Big East Conference.”

Villanova retired the No. 15 jersey of Arcidiacono, who was part of 117 wins during his four-year career, which culminated with the 2016 national championship. Arcidiacono had the assist on Kris Jenkins’ buzzer-beating 3-pointer that sent Villanova to a 77-74 win over North Carolina for the title.

“I got a little emotional,” said Arcidiacono, who is in his third season playing for the Chicago Bulls. “It means the world to me. The NBA is awesome but there’s something special about being a student-athlete, playing in front of your friends and family every single game on campus in front of a raucous crowd.”

Marquette: The Golden Eagles have a rare weekend off before returning to action next Tuesday at home against Creighton. Marquette can gain some momentum for the postseason by playing three of the next four at home before finishing the regular season on the road at DePaul and St. John’s.

Villanova: The Wildcats take a break from Big East action to wrap up the Philadelphia Big 5 portion of their schedule on Sunday at Temple. Villanova already has defeated its first three Big 5 opponents: La Salle, 83-72 on Dec. 1; Penn, 80-69 on Dec. 4; and Saint Joseph’s, 78-66 on Dec. 7. Villanova has won six straight against Temple.

UP NEXT
Marquette: Hosts Creighton on Tuesday.
Villanova: At Temple on Saturday.

0
0   0
previous Bucks finally fall without Giannis, out on paternity leave
next US soccer men’s union says women’s pay should be tripled
Related Posts