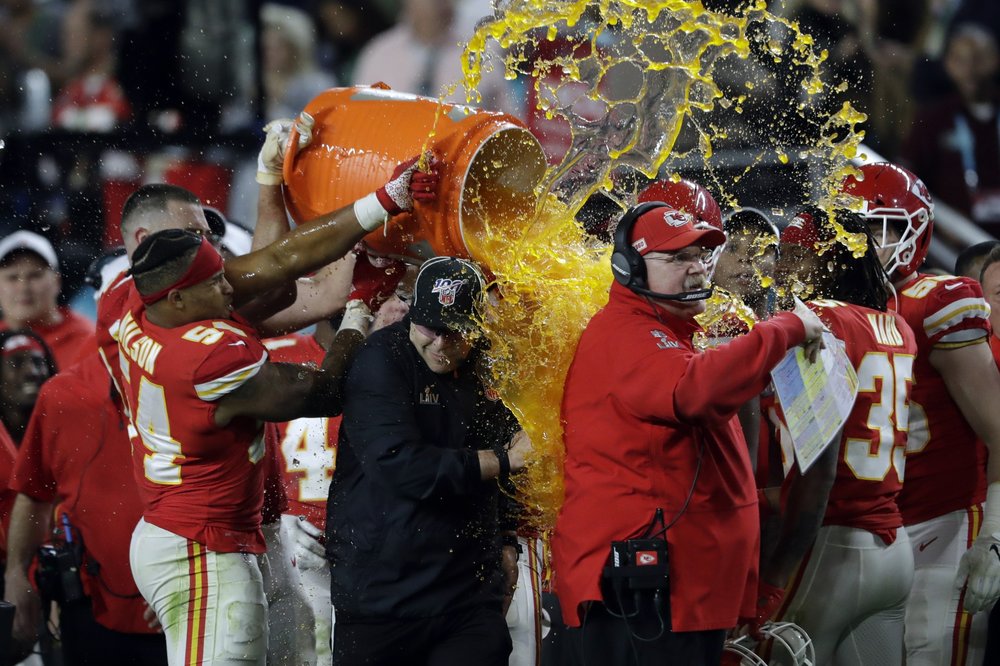 Reid wasn’t about to let this Super Bowl slip away. Not with the brilliant Mahomes under center, and not after 21 years of working late every night to get it right.

The big guy finally got his biggest win. And a city that has waited 50 years to celebrate can’t wait to welcome him home.

“Nobody deserves this trophy more than Andy Reid,” Chiefs owner Clark Hunt said as Mahomes and his teammates celebrated around him.

Criticized for losing the big game once before with conservative play calling, Reid went the other way on this magical night in Florida. He let Mahomes be Mahomes, and that was enough to rally the Chiefs with three touchdowns in the last 6:13 for a 31-20 win.

The coach who had won more games than any other without winning a Super Bowl now has one on his resume. A city that hadn’t held the Super Bowl trophy aloft in half a century can now proudly do it once again.

All thanks to a coach who kept plugging away and plugging away, certain he would one day have a winner no matter what anyone said.

“This is what it’s all about,” Reid said. “What a great team, great coaches. Appreciate every bit of it.”

For a time in the fourth quarter it seemed like history was repeating itself for a coach who kept winning games — but couldn’t win the biggest game. The Chiefs were down 20-10 and facing a third-and-15 with a little more than seven minutes left when Mahomes found Tyreek Hill open for a 44-yard gain that turned the game around.

Mahomes had struggled before then, throwing two interceptions. But if the Chiefs were going down, they were going to go down throwing.

“Coach Reid told me after both (interceptions) to keep firing,” Mahomes said. “Keep believing in your eyes, keep throwing it. He gives me the confidence to go out there no matter what I do, and we worked out well in the end.”

Up against a wunderkind in San Francisco’s Kyle Shanahan, Reid used the wisdom gained in 21 years of coaching in Philadelphia and Kansas City for a fourth quarter that will live long in Chiefs lore.

Then again, it doesn’t take all that much wisdom to hand Mahomes the ball and tell him to find someone to catch it.

“Pat Mahomes and all his boys on defense taking care of business, the coaches, man, a great job of keeping things right at the right time,” Reid said. “And it was a beautiful thing.”

It was Reid and his staff who saw the potential in Mahomes, trading up to make him the 10th pick in the 2017 draft despite having a perfectly capable quarterback in Alex Smith. After letting Mahomes sit and learn for a year, Reid linked his fortunes to the talents of his young charge. His faith was rewarded with three touchdowns in the final minutes.

And a Lombardi Trophy.

If he didn’t totally erase the memories about what happened 15 years ago when the Eagles lost to New England, he at least has some new ones to take their place.

“He’s one of the greatest coaches of all time,” Mahomes said. “I don’t think he needs the Lombardi Trophy to prove that, but I think it takes all doubt away.”

It was the first Super Bowl for Mahomes, who could have been overwhelmed over getting the opportunity of his lifetime. At times on Sunday he seemed just that, misfiring early and throwing a pair of interceptions — his first in five postseason games — that could have proven costly.

But Reid’s greatest strength — besides his incredible work ethic — might be his ability to let his players be themselves. That’s true not only with Mahomes, but seemingly every other player on a team that came agonizingly close to the Super Bowl a year earlier.

“We’ve got a great leader in Pat (Mahomes) and then you put the mastermind Andy Reid behind that, it’s absolutely unbelievable,” Chiefs tackle Eric Fisher said. “So much hard work paid off.”

The hardest worker of all was Reid, the coach who comes in hours before everyone else and leaves hours after. Reid has done it his entire career, even when one of his sons died of a drug overdose just as he was taking over the Chiefs seven years ago.

His players see it and want to work harder themselves.

“He’s there at 3 in the morning and there to 11 at night,” Mahomes said. “I don’t think he sleeps. He works harder than anyone I’ve ever known.”

The hard work finally paid off.

Tim Dahlberg is a national sports columnist for The Associated Press. Write to him at tdahlberg@ap.org or https://twitter.com/timdahlberg