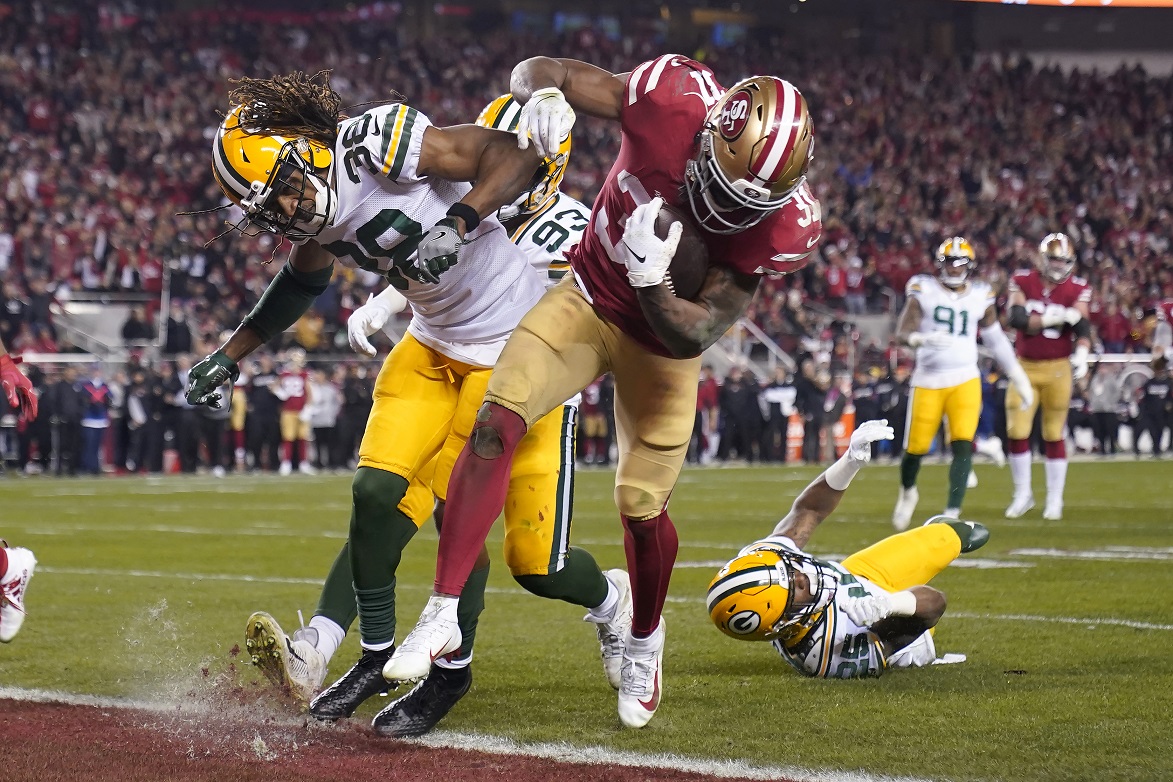 There it is in a list of all the times he’s been cut by NFL teams. Philadelphia, Miami and Baltimore all let Mostert go in 2015. Cleveland, the Jets and Chicago all sent him packing the following year before he finally ended up on San Francisco’s practice squad.

That unlikely path that saw Mostert get cut almost as many times as he was handed the ball his first three seasons somehow has led to the Super Bowl after he posted one of the greatest postseason performances ever by a running back.

“The journey’s been crazy,” Mostert said. “Not everybody can deal with that type of stress and pain and agony that I went through. But like I said, I kept the faith in not only myself but whoever gave me the opportunity.”

The 49ers are the beneficiaries of that as the former skateboarder and surfer has proven to be skilled enough on his own two feet as an NFL running back when he was finally given the chance.

Mostert led the 49ers in rushing this season with 772 yards and provided the signature performance of his career on the big stage of the NFC championship game when he ran for 220 yards and four touchdowns in a 37-20 win over Green Bay on Sunday that sent the Niners to the Super Bowl.

Only Hall of Famer Eric Dickerson has rushed for more yards in a playoff game with 248 for the Rams against Dallas on Jan. 4, 1986.

“He’s been a special teams player for so long because of his speed, I’m just so happy that he’s getting the opportunity to showcase his ability at running back,” tackle Joe Staley said. “The guy works harder than really anybody, and he’s been patient. Never really complained about his role, always just shows up, works hard and this is what happens when you accept your roles on a team, you don’t worry about results, you don’t worry about stats, and then you have a moment like this. He was ready for this the whole season.”

Mostert wasn’t sure this day would ever come. He carried the ball only 43 times his first three seasons in college at Purdue, where he excelled as a kick returner, before getting a little bigger load his final year when he had 93 carries for 529 yards.

That wasn’t nearly enough to get him drafted so he signed as an undrafted free agent with Philadelphia in 2015. He was cut before the season and then signed to the practice squad before being picked up by Miami and spending a month with the Dolphins.

He was then claimed by Baltimore and spent two months there before signing with Cleveland late that season. He spent the entire offseason with the Browns and thought he had made the team when he was on the initial 53-man roster only to get the bad news a day later.

“It just made me stronger,” he said. “I got immune to being cut. I wanted to show the world what I can do. And honestly it was just one of those things where I really had a talk with my wife and I was saying, what do you think should happen after that cut? And she basically said, ‘Hey, if you love your job, if you love this sport, you will do anything for it. And if you love what you do, you would do anything for it.’ And that was my philosophy from here on out.”

Mostert bounced around that season before ending up with the Niners when coach Chip Kelly, who initially signed Mostert in 2015 in Philadelphia, gave him another shot.

Mostert played one game late that season and got his first career carry before he had to impress a new staff when Kyle Shanahan took over the following year.

Mostert is the only skill position player still on the Niners who was here when Shanahan arrived as he proved indispensable as a special teams standout and then slowly carved out a bigger role.

He had a handful of carries his first year under Shanahan as he adjusted from playing mostly out of the shotgun to the outside zone running scheme utilized by the Niners.

The coaching staff realized Mostert’s blazing speed could be an asset in that one cut and go system. He ran for 250 yards in a four-game stretch before breaking his arm midway through last season against the Raiders.

He came into this season fourth on the depth chart at running back before finally starting to get the bulk of the carries in December, starting with a 146-yard game at Baltimore.

“Whether it’s special teams or offense, the way he hits the hole, he gets so vertical so fast,” tight end George Kittle said. “I think defenses, they underestimate his speed. You can just see it. He’ll hit a hole and the guy will take what he thinks is a good angle. And, next thing you know, he’s by him. Doesn’t even touch him. And, his 0 to 60 is literally in two steps and it’s so special, especially with our offense. The way we do outside zone, inside zone, he can make one cut and get vertical. It’s all we need.”

While Mostert has become the featured back, he hasn’t forgotten his special teams roots. He still gets extensive time on coverage units and his speed as a gunner helped cause a muffed punt in a divisional round playoff win over Minnesota.

Special teams mean so much to Mostert that he even named his son, Gunnar, after his role on punt coverage. That’s something he doesn’t want to give up.

“It hasn’t crossed my mind because I’m still that team guy,” he said. “I love playing special teams. I don’t take it for granted because that’s where I started. That’s where I made my name and made my mark.”

Now Mostert is making an even bigger mark in his new role.