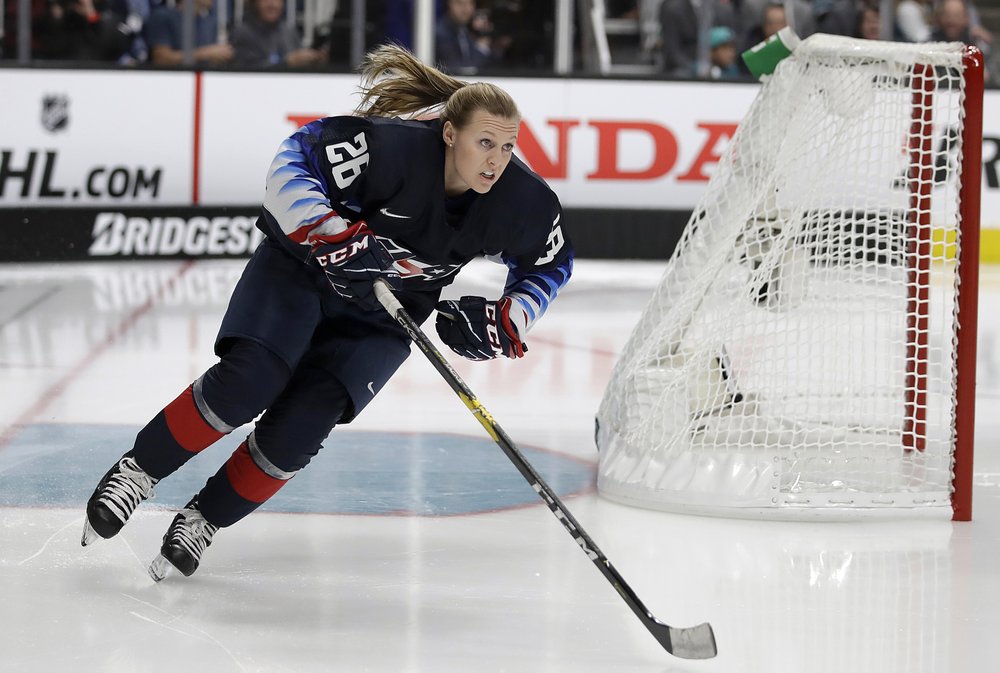 The magnitude of the moment wasn’t lost on Kendall Coyne Schofield — wearing her No. 26 Team USA jersey — as she dug her skates into the ice waiting for the starter’s whistle to blow.

It took 14.346 seconds, to be exact, for Coyne Schofield to complete her lap in the NHL All-Star fastest skater competition in San Jose last year. And the 27-year-old from Illinois didn’t need to hear the roar from the crowd, see the smiling NHL players’ faces or understand how the video would go viral on social media to appreciate what she had accomplished.

In becoming the first woman to participate in a skills competition event, and finishing seventh among eight participants, Coyne Schofield had an inkling of how much she opened the door of opportunity for expanding female player involvement at the NHL level.

“The moment in San Jose was incredibly special,” she told The Associated Press this week. “And to see how many people it impacted in such a positive way, I had an optimistic feeling something special was going to be done here.”

Coyne Schofield was referring to the the NHL All-Star festivities taking place in St. Louis next week. The league announced Wednesday that the skills competition on Jan. 24 will feature a 20-minute 3-on-3 scrimmage between two 10-player women’s teams — nine skaters and a goalie each from the national teams of the U.S. and Canada, the world’s two best.

“I was the individual that skated that lap,” said Coyne Schofield, selected to play for Team USA. “So to step on that ice alongside 19 other women just shows how we’ve earned this opportunity to have more women involved.”

The league couldn’t help but take notice after last year.

“It was just this moment, having been there and experienced it, that you’ll never forget,” Mayer said. “And then we had to look at immediately, how in the world are we going to top this?”

Rather than attempt to duplicate the series of events that led to Coyne Schofield’s participation, which came only after Colorado Avalanche forward Nathan MacKinnon backed out with an injury, Mayer chose to expand the women’s involvement.

The teams feature players who have combined to win 39 Olympic and 108 world championship medals, and the game provides much-needed exposure to a sport in flux. The game also builds on the league’s bid to expand its audience.

“Yes, we’re trying to obviously bring more folks into the fold, and this is just one way to do it,” Mayer said. “There are so many young girls that are playing, and an event like this is another way to influence them, to show that, ‘Hey, I can be on this stage some day.’”

“That’s the intention here to give them a forum they deserve, that they’ve earned,” Mayer said.

Two Hockey Hall of Fame inductees, American Cammi Granato and Canadian Jayna Hefford, will serve as coaches. And the four-person officiating crew will be made up of women who made their debuts at various NHL prospect tournaments in September.

One player from each team will be selected through a Twitter poll to compete in the newly introduced “Shooting Stars” event, during which All-Stars will shoot pucks from the stands at various targets on the ice.

This marks the third consecutive year women have played a role in the All-Star game.

In 2018 at Tampa Bay, with Team USA holding its pre-Olympic camp nearby, the NHL invited three players to demonstrate each skill event. They included Hilary Knight, whose preview of the shooting accuracy event took just 11.64 seconds, which would have placed her second, just behind Brian Boyle’s time of 11.626 seconds.

Coyne Schofield said the the exposure comes with additional pressure as women showcase their abilities before an international television audience.

“We have to take advantage of every moment and every opportunity we have because at the end of the day, we’ve earned those moments,” Coyne Schofield said. “And we’re going to keep fighting and keep playing, because we know if we do both of those things, more opportunities will be created for the next generation.”

Growing the women’s sport has become a rallying cry for Coyne Schofield and her colleagues some 10 months after the Canadian Women’s Hockey League folded for financial reasons.

Coyne Schofield is among many who would like the NHL to step in and establish a women’s pro league. She hopes the expanded role of women at the All-Star game is another step in that direction.

“You know, I would hope so,” she said, before adding she didn’t want to comment further.

Commissioner Gary Bettman has supported the idea of the NHL forming its own league, but not at the expense of pushing an existing league out of business.

For now, Coyne Schofield welcomes the expanded opportunity the NHL has provided.

“The NHL allowing us to play 3-on-3 is another step further in being able to get more eyes in front of the women’s game,” Coyne Schofield said. “And you know what, at the end of the day a game is going to be played. So we want to win.”

0
0   0
previous Davante Adams’ drive to be great has become an ‘obsession’
next Antetokounmpo, Bucks hold off Celtics, 128-123
Related Posts