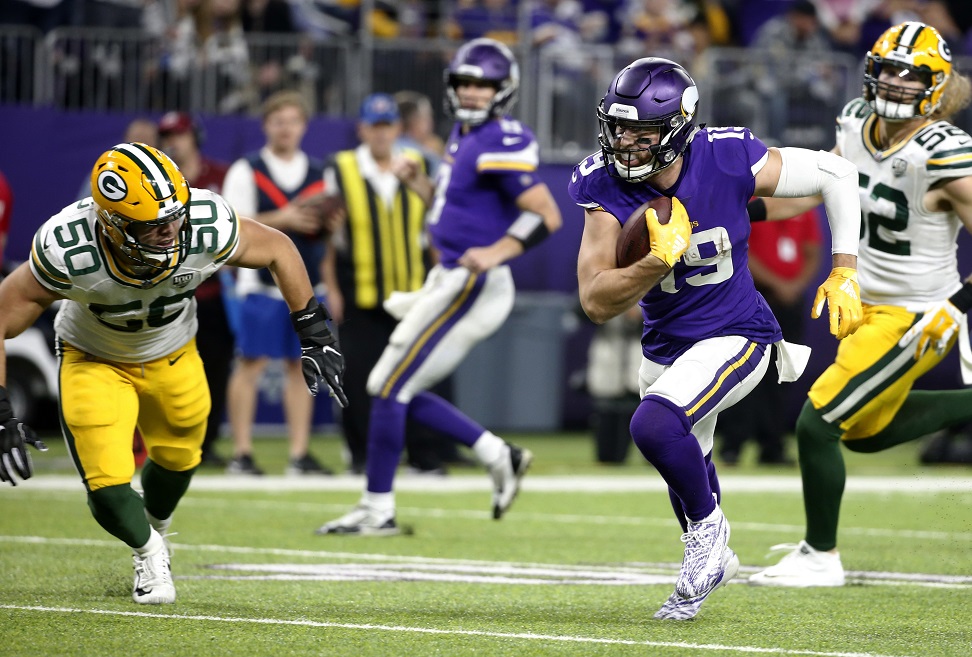 EAGAN, Minn. (AP) — Adam Thielen learned in college the psychological art of pivoting from a bad play, courtesy of a toy toilet the Minnesota State team kept on the sideline during games to flush away negative feelings and leave them in the past.

The Minnesota Vikings wide receiver has had to lean hard on that life lesson this season, suffering one setback after another. Finally, there was a favorable development for Thielen to relish when his 43-yard reception early in overtime on Sunday set up the winning touchdown in New Orleans.

The wild-card playoff game began ominously. Thielen caught a short pass for a first down on the third play from scrimmage and lost a fumble at the Minnesota 37. The defense managed to limit the damage to a field goal, a significant factor in what became a 26-20 victory that sent the Vikings to the divisional round at top-seeded San Francisco on Saturday.

“When we make a mistake as an offense, we just want to get the ball back as quickly as possible,” quarterback Kirk Cousins said. “I’m sure Adam took that same approach, and there was nobody more eager to make a play before or after that fumble than Adam.”

Thielen dropped a pass and erased a first-down run with a holding penalty later in the game, too. For the first time in three months, though, he was a major part of the offense again. The two-time Pro Bowl pick, who totaled 3,607 receiving yards and 18 touchdowns over the three previous seasons, pulled his right hamstring while he scored on a sliding grab at Detroit on Oct. 20.

He aggravated the injury twice, once in a game and once during practice, and wound up on the field for only 16 snaps in a seven-game span. His return on Dec. 15 at Los Angeles was quiet, and the offense was a mess the following week against Green Bay. Thielen finished 2019 with just 418 yards, a total he had topped in 2018 before the end of the fourth game.

The Vikings wouldn’t have beaten the Saints without him. Six of his seven receptions moved the chains during scoring drives, and four of them came on third down. With 129 yards, he had his first triple-digit total since Oct. 6 at New York and just the second of the season.

Seeing Thielen separate downfield from New Orleans cornerback Patrick Robinson in man-to-man coverage, Cousins let the ball fly from a clean pocket with Minnesota just across midfield and in control of the momentum. The pass came in for a perfect landing over Thielen’s right shoulder for a basket catch he made look a lot easier than it was.

“As a competitor, when you have a bad play, all you want is to get the ball again and get going,” Thielen said, adding: “Everybody was positive. Everybody had my back.”

The vertical route Thielen ran was the same one Cousins overthrew on third-and-10 at Chicago on Sept. 29 with the Vikings trailing 7-0 in the first quarter near midfield. They lost 16-6, saw their record drop to 2-2 and found themselves in disarray, with Stefon Diggs so upset by the direction of the offense that he skipped two days of work, drawing a fine of more than $200,000.

Two weeks earlier during a 21-16 defeat at Green Bay, Cousins overthrew Diggs on that route, too, on a third-down play early in the fourth quarter from the Minnesota 39.

There was frustration evident at times in New Orleans, particularly after a three-and-out in the third quarter with the Vikings leading 13-10 when Diggs had to be calmed down on the sideline by running back Dalvin Cook and Cousins.

The offense, now 17 games into the scheme designed by adviser Gary Kubiak and directed by coordinator Kevin Stefanski, this time proved to be well-equipped to handle the setbacks. Just like Thielen learned more than seven years ago at Minnesota State.

“Any time you play well, you feel good and it’s important, but if we had won and Adam had zero catches, I think we’re all, in this locker room, OK with that, too,” Cousins said. “We’ll throw the ball to whoever’s open, whoever the plays are designed to go to, and whatever the defense does dictates where the ball goes. That’s a big piece of it that I think you can’t forget about. Many times, I wasn’t expecting to go to Adam when the huddle was broke, but then the coverage dictates that that’s where the ball goes.”