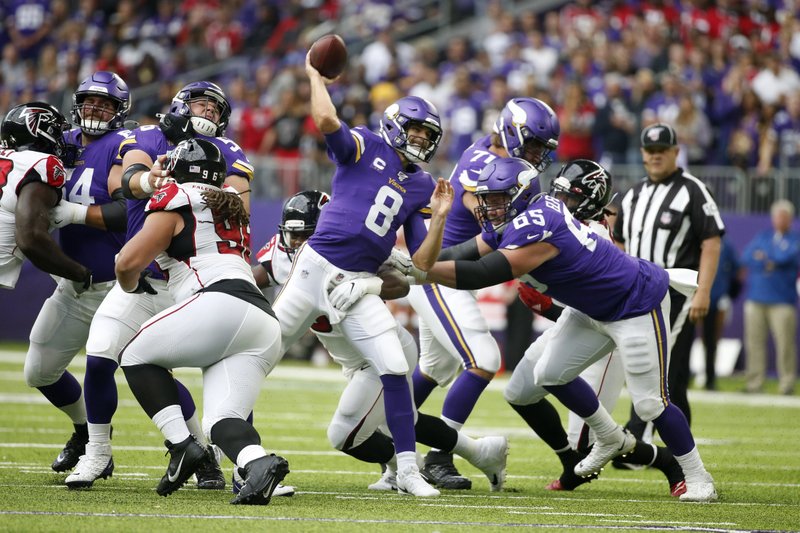 EAGAN, Minn. (AP) — In their boisterous locker room in New Orleans after the overtime victory, the Minnesota Vikings roared in celebration when coach Mike Zimmer gave the game ball to quarterback Kirk Cousins.

“How does it feel to win a playoff game?” Zimmer asked Cousins with a question that needed no answer following the 26-20 decision that ousted the favored Saints.

Cousins did his part to diffuse the skepticism about his inability to deliver a winning performance in the clutch, with an intelligent, steady, turnover-free game that easily trumped his more-accomplished peer on the other side, Drew Brees.

“With all the bad rhetoric that he gets all the time about this or that, I just felt like it was time to tell a lot of people that he’s our guy,” Zimmer said.

With a third-down completion to Stefon Diggs, a deep connection to Adam Thielen and the end-zone winner to Kyle Rudolph, Cousins guided the Vikings into a divisional round game at San Francisco in his signature moment in Minnesota to date.

“There’s a whole lot of reasons we won the game,” Cousins said. “Does the quarterback play a role in that? Yes, but it was a team win.”

Starting with Zimmer, who had his own negative outside noise to drown out on Sunday with multiple national media reports during the week that an ugly defeat had the potential to prompt a firing or even a trade by the Vikings. The 63-year-old Zimmer, who raised his postseason record to 2-2 in six years with the team, couldn’t hold back his feelings in a postgame NFL Network interview with his former pupil, Hall of Fame cornerback Deion Sanders.

“Third-winningest coach in Vikings history, and I have to listen to this,” Zimmer said.

Not only did Zimmer have his team fully prepared and confident to face the Saints, his defensive strategy for stopping the passing attack led by Brees and wide receiver Michael Thomas was superb. From double coverage on Thomas to frequently moving defensive ends Danielle Hunter and Everson Griffen inside to pass rush against the guards, Zimmer called one of the finest games of his career. The Vikings had two takeaways against a Saints team that set the NFL record for fewest turnovers in a season with eight.

Now they’ll have to quickly regroup, with the top-seeded 49ers waiting on Saturday.

The return of running backs Dalvin Cook and Alexander Mattison went a long way toward this win, keeping Brees off the field, putting the Vikings in plenty of third-and-short situations and helping Cousins connect on the play-action passes he so often thrives on. The Vikings rushed for 136 yards, the fifth-highest total allowed by the Saints this season.

The coverage units were up against an All-Pro in Deonte Harris, but the rookie had a 54-yard kickoff return and a 17-yard punt return in the game.

Right tackle Brian O’Neill more than held his own against five-time Pro Bowl defensive end Cameron Jordan, who finished with three tackles, one sack and one hit on Cousins. The sack was late in the fourth quarter on third-and-19, when Cousins smartly took the loss at his own 34 to keep the clock running rather than risk an incompletion or a turnover. On the pass to Thielen in overtime, O’Neill managed to steer a hard-charging Jordan away from Cousins without holding while nearly fully extending his body during the course of the block.

O’Neill, the second-year player out of Pittsburgh, has been the team’s best lineman this season and ought to be a candidate to eventually replace Riley Reiff at left tackle.

“He’s got a chance to be a really, really good player if he continues to improve, continues to get stronger and more physical, because he’s smart and he’s tough,” Zimmer said.

Cornerback Xavier Rhodes has had a rough season, and he was primarily responsible for the only passing play by the Saints that covered more than 20 yards. When do-it-all backup quarterback Taysom Hill hit Harris for a 50-yard completion in the second quarter that set up the first touchdown for New Orleans, Rhodes was beaten with a slick double move that sprung Harris open on a post route.

Nickel cornerback Mackensie Alexander didn’t practice at all last week and was sidelined for the game by a knee injury, but backup safety Andrew Sendejo ably filled in for the majority of the snaps in the slot after never playing there in his entire career until practice on Friday.

Defensive tackle Shamar Stephen left the game with a knee injury, putting his status in question with the shortened week. Backups Jaleel Johnson and Jalyn Holmes each made a significant contribution on Sunday. Johnson took down Alvin Kamara for a 6-yard loss on a third-and-1 pass early in the third quarter, and Holmes recovered the fumble forced by Hunter at the Minnesota 36 late in the fourth quarter.

After deftly managing the din at the Superdome and keeping mistakes to a minimum, Cousins and the offense must find a way to maintain the productive run-pass balance and avoid major setbacks created by San Francisco’s pressure. The 49ers were sixth in the NFL during the regular season with 27 takeaways and first in the league with an average allowance of 5.22 yards per pass play.