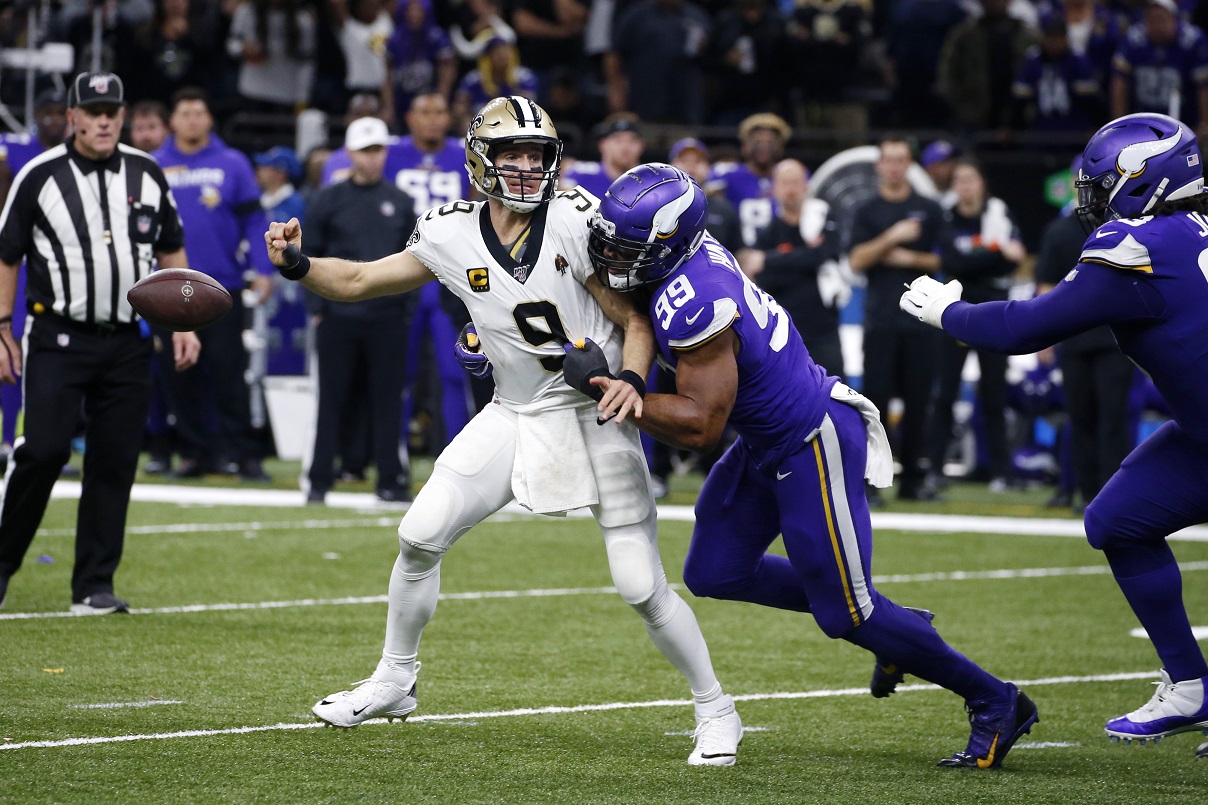 Vikings, like Texans, work OT to advance in NFL playoffs

Vikings, like Texans, work OT to advance in NFL playoffs

Working overtime paid off for Minnesota and Houston this weekend.

Seattle avoided the extra session and made it a wild-card bonanza, with three of the four road teams winning.

One day after the Texans rallied from a 16-0 deficit to beat Buffalo 22-19 in an AFC wild-card game, the Vikings stunned New Orleans 26-20 on Sunday.

The Texans (11-6) will travel to Kansas City (12-4) next Sunday in the divisional round. Tennessee (10-7), which ended New England’s run of three straight Super Bowl appearances with its victory Saturday at Foxboro, gets a trip to Baltimore (14-2) next Saturday night.

Seattle (12-5) goes to Green Bay (13-3) next Sunday because Minnesota’s victory meant it would head to top-seeded San Francisco next Saturday.

Kirk Cousins hit tight end Kyle Rudolph with a 4-yard fade on third-and-goal on the only drive of overtime. Minnesota (11-6) had blown a 20-10 lead before marching 75 yards in nine plays to win. Cousins’ 43-yard completion to Adam Thielen got the ball to the Saints 2-yard line to set up the winning score.

“I’m so proud of our team, the way we fought,″ Rudolph said. “We knew it wasn’t going to be easy coming here. We expected 60 minutes and we got a little bit more. I’m so proud of our guys. Nobody gave us a chance to win here today — except everybody in our organization. We believed.”

Both No. 6 seeds went on the road and won for the second straight year. Not only were both No. 3 seeds eliminated, but their forty-something Hall of Fame caliber quarterbacks, the Saints’ Drew Brees and the Patriots Tom Brady, took quick exits.

The Vikings faded in December, losing three of five outings to fall short in the NFC North behind Green Bay and wind up as the lowest NFC seed. But with a staunch defense and strong pass rush that had Brees and the Saints off-balance for much of the game, it appeared Minnesota would not need extra time.

Then Brees found Taysom Hill for a 20-yard touchdown to cap an 85-yard drive, and Wil Lutz made a 49-yard field goal in the dying seconds to force overtime.

It was the second straight time the Saints’ season had ended in OT in the Superdome. New Orleans (13-4) fell to the Los Angeles Rams in the NFC championship game last January, damaged greatly by an egregious missed penalty call.

At Philadelphia, Russell Wilson threw a 53-yard touchdown pass to DK Metcalf, Marshawn Lynch had a rushing score, and Seattle held the Eagles to three field goals. Wilson threw for 325 yards and led the team with 45 yards rushing. Metcalf had seven catches for 160 yards.

“You’ve got to step it up in the playoffs,″ Seahawks edge rusher Jadeveon Clowney said. “We knew it was going to be an upfront game, the whole game. They’ve got a great offensive line, great veteran players.”

The Seahawks are 8-1 away from Seattle, so Lambeau Field won’t likely intimidate them.

Seattle, which had lost three of its last four regular-season games, has played some classic games with Green Bay. Most notable was the 2014 NFC title game in which the Seahawks rallied from a 16-0 halftime hole to win in overtime.

Another 40-year-old QB lost. Josh McCown was forced into action in the first half as yet another Eagles starter, this time quarterback Carson Wentz (concussion) went down. McCown, who was retired when the season began, looked rusty and Philly flopped several times in the red zone.

The Texans already have won at Arrowhead Stadium this season, 31-24 in October. Deshaun Watson threw for 280 yards and a touchdown while running for two more in outdueling Patrick Mahomes. Carlos Hyde ran for 116 yards and a touchdown against the team that traded him to Houston in the preseason.

Back then, however, Kansas City’s defense hadn’t blossomed. Now, under coordinator Steve Spagnuolo — whose units traditionally take a while to coalesce — the Chiefs are formidable. They’ve allowed 69 points in the past six games, all wins.

KC also has gotten healthier down the stretch.

The Ravens have won 12 straight for the best record in the league. All-Pro quarterback Lamar Jackson will present a major problem with his arm and legs for the Titans, who managed virtually no pressure on the stationary Brady in their wild-card win.

But Tennessee isn’t afraid of going anywhere, as it proved in foggy Foxborough by making the defending champions look ordinary. It already has a fierce rivalry with Baltimore.

Just a huge challenge, with what they have been able to do in all three phases,″ coach Mike Vrabel said.We’ll have to try to find a way to slow them down.‘’