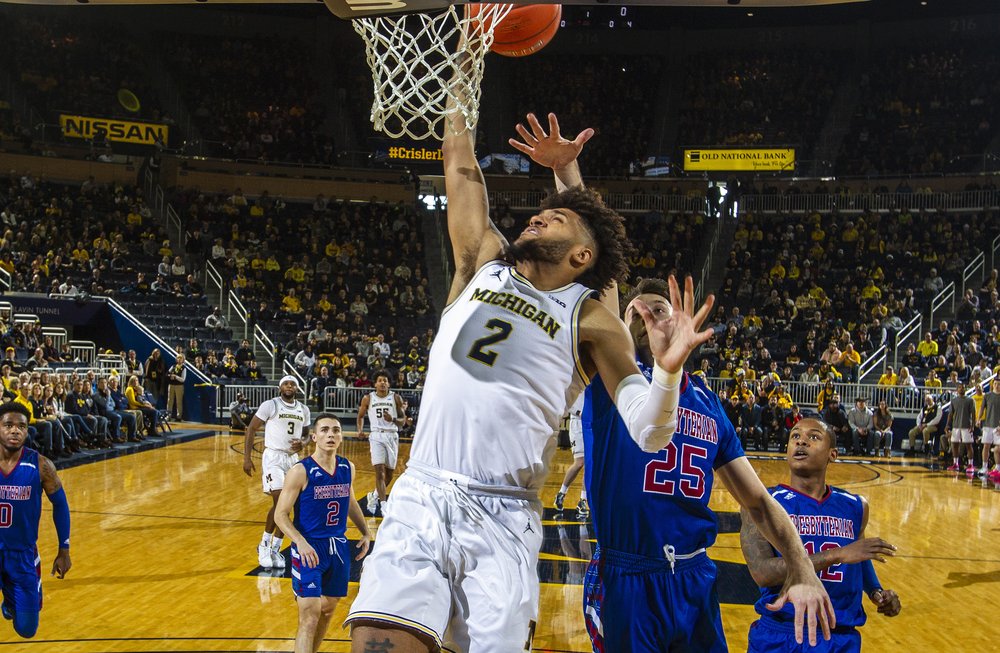 Big Ten title to run through (state of) Michigan this year

Big Ten title to run through (state of) Michigan this year

The road to the Big Ten title looks like it will run through Michigan.

The state. Not just the program.

After a couple of early losses by Michigan State, the nation’s preseason No. 1, the Spartans appear to have found their stride. They haven’t fallen since a competitive loss to Duke the first week of December, and that run includes league wins over Rutgers and Northwestern that have given Cassius Winston and Co. a nice start to league play.

Down the road in Ann Arbor, the Wolverines had been one of the biggest surprises nationally with seven straight wins capped by back-to-back victories over North Carolina and Gonzaga to start the season. And while losses have followed to Louisville, Illinois and Oregon, coach Juwan Howard’s first team is still riding plenty of confidence into the new year.

Oh, and the Spartans and Wolverines just happen to meet next week in an early Big Ten showdown.

“Our guys are very accepting to everything and all the teaching that’s been happening. It’s been a lot for them,” Howard said. “We’ve had numerous practices where it’s been very energetic. No one has come in with an attitude where they feel like they know everything. They’ve been like a sponge, very engaging. Eager to learn. Excited about the new beginning. At the end of the day, I want them to have fun. It’s a college experience. They’re supposed to enjoy this experience.”

They certainly enjoyed the start of the season. Things have been a little shaky lately.

The Wolverines learned Friday that leading scorer Isaiah Livers would be out indefinitely after hurting his groin in a game against Presbyterian. The junior forward had been averaging 13.6 points.

Even though the Big Ten schedule is already underway, the meat of it begins next week. And while the Spartans and Wolverines figure to be in the mix, they won’t be alone. Here are some of the other key story lines:

While the Wolverines were capturing national attention, Ohio State was slowly building momentum of its own. The Buckeyes won their first nine games, including victories over Villanova and North Carolina, before dropping a surprising league game to Minnesota. But they bounced back in fine fashion, knocking off No. 6 Kentucky to get back on track before losing to No. 22 West Virginia 67-59 on Sunday.

Also off to a hot nonconference start has been Indiana, whose only loss through its first 12 games came to Wisconsin. The Hoosiers have had a soft schedule so far, but it picks up soon with games against Maryland and Ohio State in early January.

It was just a few years ago that Chris Collins appeared to have Northwestern on the upswing. The Wildcats were coming off back-to-back 20 win seasons and had qualified for the NCAA Tournament, even advancing to the second round.

It’s been diminishing returns ever since.

The Wildcats won 15 games the next year, 13 last season, and they could struggle to equal that mark this season. Among their six losses already are games against Merrimack and Radford along with Michigan State and Purdue.

Winston has lived up to his billing as the Big Ten’s best, averaging 17.6 points and 6.1 assists to rank in the top five in each category. But joining him on the early season all-conference team would be a bunch of guys who aren’t household names.

Iowa forward Luke Garza leads the league in scoring at 21.5 points a game, a number that puts him just outside of the top 10 nationally. Minnesota sophomore Daniel Otturu has emerged as a contender for many national awards, averaging 18.3 points, 11.7 rebounds and 3.2 blocks to rank in the top two in the Big Ten in each category. Wolverines guard Zavier Simpson is averaging 11.9 points and 8.8 assists, tied for second nationally behind Samford’s Josh Sharkey.

Collins could be on his way out at Northwestern, but he’s hardly the only coach heading into January with pressure beginning to mount. Pat Chambers got Penn State off to a 10-2 start, but the Nittany Lions may need to make the NCAA Tournament for the first time in his nine seasons in Happy Valley to give him another season.

It’s hard to put together a season preview for the Big Ten without mentioning Maryland, which returned everyone from an NCAA Tournament team but big man Bruno Fernando. The Terrapins ripped off 10 straight wins to start the year before back-to-back losses to Penn State and Seton Hall gave them some hefty lumps headed into the new year.

Still, the Terps will help to shape the league race right away. Mark Turgeon’s team begins January against upstart Indiana, then plays ranked foes Michigan State and Iowa, all in a harrowing span of 10 days.