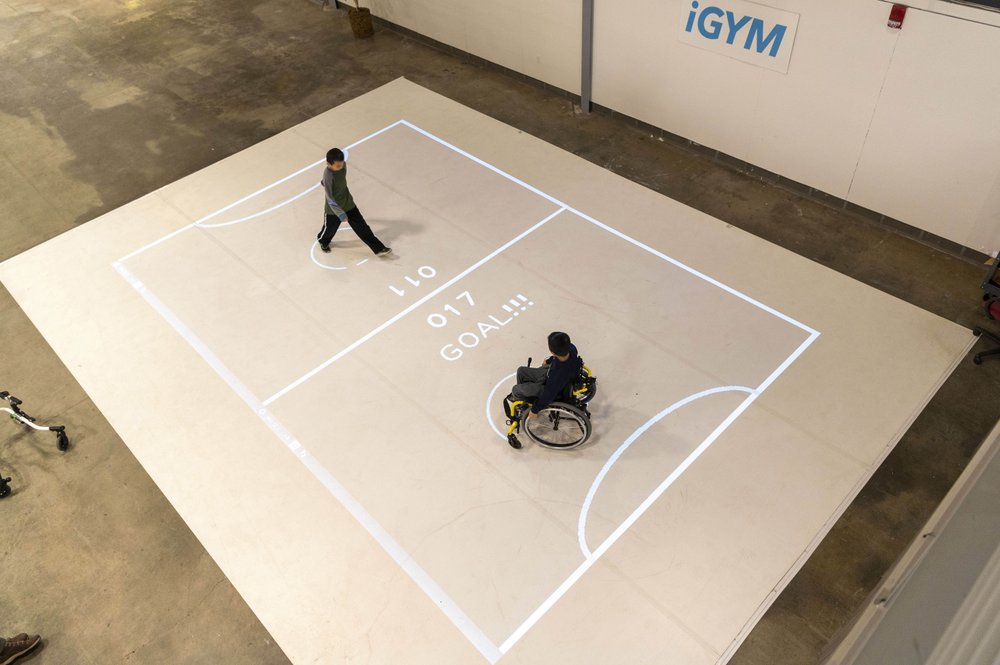 ANN ARBOR, Mich. (AP) — One Kreps brother uses a wheelchair and the other doesn’t, yet they are able to play sports together on a level playing field thanks to an augmented reality system developed at the University of Michigan.

The technology, called iGYM, allows people with mobility disabilities and their non-disabled peers to exercise together in a fun environment. The system carries several games.

“This is something that’s kind of neat, where they can both play,” said father Erik Kreps, who brought 10-year-old Darren and 9-year-old Bryan to Ann Arbor on a recent Sunday to use the iGYM system.

Bryan, who has a neuromuscular disorder, uses a wheelchair and a walker to help him get around. Both mobility aids are welcome on the court that iGYM projects onto the floor.

In one game — a cross between soccer and air hockey — as players enter the court, a virtual circle appears around them and that circle moves with them as they traverse the arena. In this game, they expand the circle to strike a virtual ball into their opponent’s goal.

The playing field is leveled thus: While Darren is able to run around the court, kicking to expand his circle and strike the virtual ball, Bryan presses a kick-button to widen the ring surrounding his wheelchair.

“It is fun to hit a ball around,” said Darren, who smiled widely throughout several games with his brother.

The technology is a one-of-a-kind, said iGYM creator Roland Graf, a professor at the University of Michigan Stamps School of Art & Design and a media artist, designer and inventor.

“We have done pretty extensive research on this. Currently, there is nothing else like iGYM, as most other accessible gaming technologies either limit it to small screens or are developed for people with cognitive disabilities,” Graf said.

iGYM exists only as a research prototype, and Graf and his team are looking for partners to help bring their project to the market.

“Our vision with the system is to make it as simple and affordable as possible, so it can be installed and switched on like any video projector or light fixture in a school gym or community center,” Graf said.