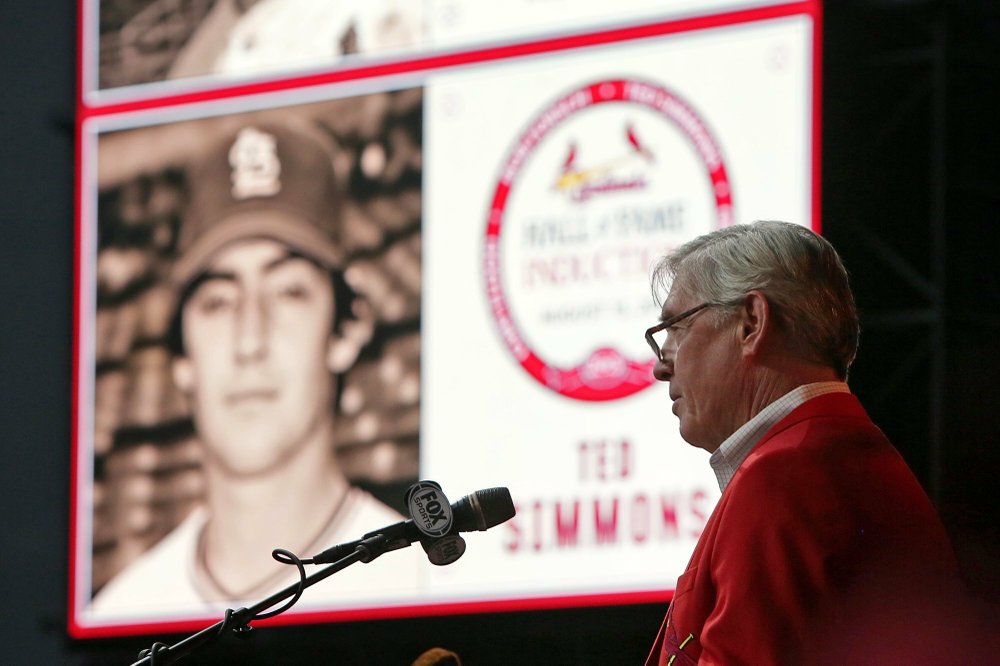 SAN DIEGO (AP) — Marvin Miller, the union leader who revolutionized baseball by empowering players to negotiate multimillion-dollar contracts and to play for teams of their own choosing, was elected to baseball’s Hall of Fame on Sunday along with former St. Louis Cardinals catcher Ted Simmons.

After falling short in his first seven times on veterans committee ballots, Miller received 12 of 16 votes from this year’s 16-man modern committee, exactly the 75% required. Simmons was on 13 ballots, and former Boston outfielder Dwight Evans was third with eight.

Miller, who died at age 95 in 2012, led the Major League Baseball Players Association from 1966-82, a time when players gained the right to free agency after six seasons of big league service, to salary arbitration and to grievance arbitration. He led the union through five work stoppages and was an adviser during three more after he retired.

After several turndowns, Miller had asked not to be considered for the Hall, calling the process “a farce.” He asked his children not to participate.

“It would have been a great honor 20 years ago,” Miller’s daughter Susan said.

Miller and Simmons will be inducted into Cooperstown during ceremonies on July 26 along with any players chosen next month by the Baseball Writers’ Association of America from a ballot headed by former New York Yankees shortstop Derek Jeter.

Simmons, involved in a high-profile contract dispute in 1972, recalled how Miller united a disparate group of players.

“Marvin would patiently wait for every single player to speak their mind,” Simmons said. “No matter how inane, no matter how un-thought out, no matter how off the mark the question came, Marvin painstakingly, patiently waded through it all. And in the end, after everyone had spoke their mind, he would bring it all together and present it in a way that everyone felt as though, yes, this is exactly what we collectively think.”

Despite his accomplishments, Simmons was up for election by voters from the BBWAA just once. He drew only 3.7 percent support in 1994 and was removed from future BBWAA ballots.

“The Hall of Fame is called the Hall of Fame and Museum. Imagine a museum of baseball without Marvin Miller in it,” former union chief operating officer Gene Orza said. “It’s like having a museum of modern art without Picasso in it. I guess I’m happy for all the people who are happy. But I don’t think Marvin would lose any sleep one way or the other over this.”

In 2008, four years before he died, Miller sent a letter to the BBWAA saying he didn’t want to be considered anymore.

“These changes resulted in a vastly more competitive game, fan interest, and increased wealth for all, including the owners of baseball clubs,” his son, Peter Miller, said in 2013. “Although he enjoyed the recognition, my father did what he did not for fame and glory, but for justice and for equitable labor-management relations. To treat that as something of lesser value than personal fame, is really to dishonor him and the players.”

“He gave players freedom and money that has made the game better for everyone,” Hall of Fame catcher Johnny Bench tweeted.

Miller received 44% of the votes in 2003 and 63% in 2007 when all Hall of Famers could participate on a veterans panel. After the Hall downsized the veterans committees, he got three of 12 votes later in 2007 from a committee considering executives that elected Kuhn.

“I am surprised,” said Donald Fehr, the union’s head from 1983-2009. “Ï have long thought that eventually academics if no one else would create the necessary momentum to rectify the omission, rectify the wrong. I’m glad to see that they have bestowed that recognition. It’s long overdue and immensely deserved.”

“Players are pleased that Marvin will now take his rightful and long overdue place in the Hall of Fame in recognition of the monumental and positive impact he had on our game and our industry,” current union head Tony Clark said in a statement.

Nicknamed Simba for his shoulder-length hair, Simmons was an outspoken opponent of President Richard Nixon and the Vietnam War. In the days before free agency, he played much of the 1972 season without a contract because of a pay dispute, finally agreeing to a two-year deal in late July.

Simmons has benefited from modern metrics such as a Baseball Reference WAR of 50.3. Eight other players who were primarily catchers topped 50, and they are all in the Hall: Johnny Bench, Yogi Berra, Gary Carter, Bill Dickey, Carlton Fisk, Gabby Hartnett, Mike Piazza and Iván Rodríguez.

Simmons hit .300 or higher seven times and finished with 2,472 hits. Among players who were primarily catchers, his RBIs are second to Berra’s 1,430 and his hits are second to Rodríguez’s 2,844.

0
0   0
previous Analysis: The Lakers are rolling, but don’t forget the Bucks
next Playoff showdowns: LSU vs. Oklahoma; Ohio State vs. Clemson
Related Posts