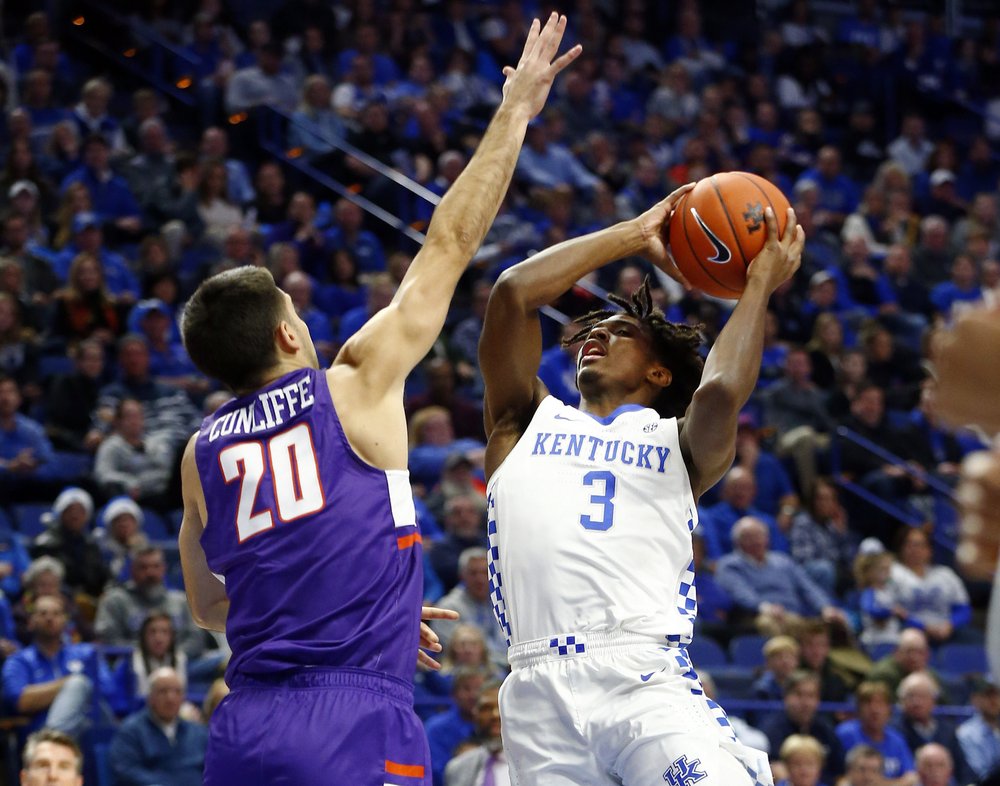 LEXINGTON, Ky. (AP) — Evansville showed no fear either of Kentucky or venerable Rupp Arena, where the Wildcats had been perfect at ruining visitors’ dreams of pulling off the seemingly impossible.

Not only did the Purple Aces deal No. 1 Kentucky a stunning 67-64 upset, they beat the bigger, stronger Wildcats at their own game. When it was over, players, coaches and their fans whooped it up in a corner of the famed court, making sure they savored every bit of a momentous victory.

“To be here is a dream come true,” Evansville sophomore forward DeAndre Williams said. “We took advantage and we made history.”

Sam Cunliffe scored 17 points, including two free throws with 6.8 seconds remaining to silence Kentucky (2-1) and a crowd of 19,101 — most of whom had expected a routine nonconference win from the Wildcats, who were 25-point favorites and had earned the top ranking a day earlier.

Those expectations never materialized as Evansville (2-0) controlled the younger Wildcats on both ends of the floor.

K.J. Riley added 18 points as the Purple Aces — coached by Walter McCarty, who won a national title with Kentucky in 1996 — pulled off the biggest upset in program history with their first win over a No. 1 team in three tries.

Evansville led much of the game and answered each Kentucky rally with clutch baskets to grab the lead and then maintain it for the season’s biggest upset.

Kentucky had been 39-0 at home against unranked, nonconference opponents when ranked No. 1 in The Associated Press poll. Evansville, meanwhile, got its first-ever road win over an AP-ranked team.

“Walter and their team deserved to win,” Kentucky coach John Calipari said. “If we would have somehow pulled it out, it would have been, kind of wouldn’t even have been fair because they fought us the whole game and they were the tougher team.

“They executed, they made shots and 3s and free throws. My hat’s off to them. It’s hard to do that in this building, but they were more ready to play. He had his team better prepared than I had my team.”

Tyrese Maxey’s layup with 8 seconds remaining got Kentucky within 65-64, but Cunliffe stepped to the line and calmly made both ends of the 1-and-1 as his teammates locked arms on the bench. The Purple Aces raised their hands and ran around a silent Rupp Arena after the final horn as the Wildcats slowly walked off.

Cunliffe, a redshirt junior guard who played at Arizona State and Kansas, did most of his damage with 15 first-half points off the bench.

“It’s amazing. You come to a school like this and you talk about doing things like this and making history and playing in front of these bright lights,” Cuncliffe said. “We prepared the right way. We had our mind set in the right spot that we could actually do it. It is surreal.”

Evansville won just 11 games last season, its first under McCarty, who played in the NBA for 10 years and was an assistant at Louisville under Rick Pitino — his coach at Kentucky — and in the NBA before returning to his hometown to coach the Purple Aces.

Evansville made nine of 30 3-point attempts while shooting 38% from the field to Kentucky’s 37%. The Aces also outrebounded the Wildcats 38-35 and were edged by just 30-28 in points in the paint.

“We started off saying, OK, we’re going to punch them in the mouth and not let them punch us in the mouth first,” Williams said. “Once we started getting stops, they started turning the ball over, things like that. We saw that and we took advantage.”

Evansville: The Purple Aces stuck to their game plan, shooting from deep and outrunning the Wildcats. They trailed just once in the second half and dictated the tempo most of the night.

“We just believed and trusted each other and made plays for each other. Guys came out and gave their all. They’ve got a good basketball team. Kentucky’s going to be a really good team, going to be around at the end of it,” McCarty said. “We played a heck of a game tonight.”

Kentucky: Missed shots and turnovers forced the Wildcats to play from behind. Even after they managed to tie and take a brief lead, they were beaten to loose balls and could never get over the hump.

“They played with energy for 40 minutes,” Kentucky forward Nate Sestina said. “They had guys who wanted to win and wanted to play hard for 40 minutes. If a guy got tired, they were able to sub somebody else in.”

A week earlier, it was then-No. 2 Kentucky knocking off the top-ranked team, outlasting Michigan State at Madison Square Garden in the season opener for both squads. It’s the first time in AP poll history that two No. 1 teams have lost in November, and the Wildcats’ stay at the top of the poll will end next week.