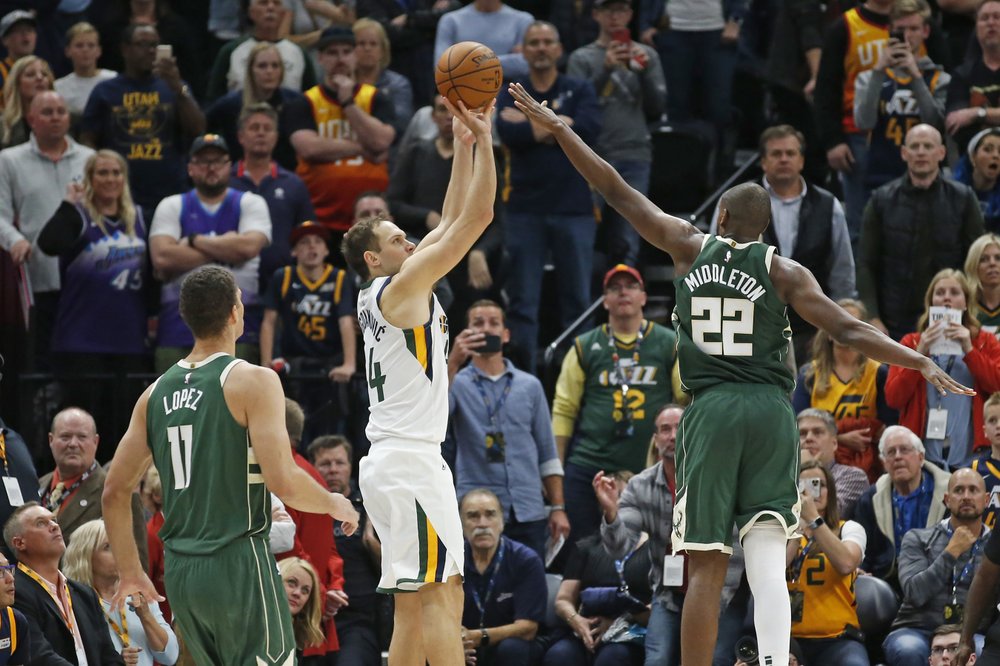 With 1.3 seconds left, Utah coach Quin Snyder drew up a play the Jazz practiced earlier Friday, but Bogdanovic said he wanted the ball.

“Mike (Conley) was supposed to be in that corner, but I asked him if he could go to the other,” Bogdanovic said.

Joe Ingles faked a pass to his right and then threw it to Bogdanovic near the left corner — one of his favorite spots. Ingles raised both his arms before the 3-pointer even settled into the net, and Utah beat the Milwaukee Bucks 103-100.

Players ran from the bench and mobbed a smiling Bogdonovic at midcourt. Bogdonovic finished with 33 points.

Utah’s Donovan Mitchell was driving for a possible winner when George Hill stripped the ball and called timeout with 2.3 seconds left. Milwaukee inbounded to Khris Middleton, but he traveled as Rudy Gobert flew at him. The clock was reset to 1.3 seconds, giving the Jazz one last chance.

“It was big that we could close that out and get that win,” said Gobert, who missed two free throws and had a late turnover before his defensive heroics. “If we lose that game at the end after all that, it would have really hurt.”

Giannis Antetokounmpo, who had 28 of his 30 points in the second half, hit a 3 and made a follow shot to give the Bucks their first and only lead, 89-88, but later fouled out and wasn’t on the court for the dizzying finish.

“I was like, ‘How bad can it get?’ We’re down 22. I couldn’t get it going but I decided to be aggressive, try and go downhill, try and shoot shots and make plays. Obviously, I was just trying to power through guys,” Antetokounmpo said.

Bogdanovic made five 3-pointers and all 10 free throws on a night when nothing seemed to come easy for most players.

“I was surprised I had a standing ovation, even that I hit a game-winner, so it was a great atmosphere, like a playoff crowd,” Bogdonovic said.

Mike Conley had 20 points, and Mitchell finished with 20, but it was Bogdanovic’s time to shine.

“Bogey’s still showing the world what he can do. A lot of people still don’t know that he’s that good, but he really is,” Conley said.

Middleton scored 26 points and Eric Bledsoe had 22 for Milwaukee. The Bucks had won four in a row.

“I think we played as hard as we could. We didn’t make shots,” said Middleton, whose team shot 36%. “The guys out there gave it our all. It came down to two plays down the stretch that cost us the game.”

Mitchell’s step-back jumper put Utah up 100-92, but Bledsoe made a couple quick hoops and Middleton made two free throws with 8.0 seconds remaining to knot it at 100.

The Jazz led by 25 in the first half, but Antetokounmpo sparked a 21-5 run to start the third quarter and it was tight from there.

The Bucks have lost 18 consecutive games since their last road win over the Utah Jazz on Oct. 30, 2001.

LOTS TO LEARN, EVEN FROM A WIN

The Jazz blew a 22-point lead in the first half and an eight-point advantage in the final 1:31. Snyder noted the jubilation had a tinge of angst.

“Giving up rebounds on a free throw, fouling length of the court, going after an offensive rebound at the wrong time — there were a number of things that we need to look at it and we will,” Snyder said. “We should feel really good about this win … but there’s a lot of things we need to learn from that game.”

Bucks: Brook Lopez picked up his fifth foul midway through the third quarter and only scored five points. … Coach Mike Budenholzer unsuccessfully challenged Antetokounmpo’s sixth foul on a dunk attempt by Gobert with 53.9 seconds to play. … The Bucks forced 20 turnovers.

Jazz: Dante Exum is still inactive as he recovers from knee surgery, Ed Davis has a fractured leg and Emmanuel Mudiay sat out with hamstring tightness. … Antetokounmpo poked Bogdanovic in the eye in the fourth quarter and appeared to dislodge his contact lens.

Bucks: At Oklahoma City on Sunday.
Jazz: At Golden State on Monday night.