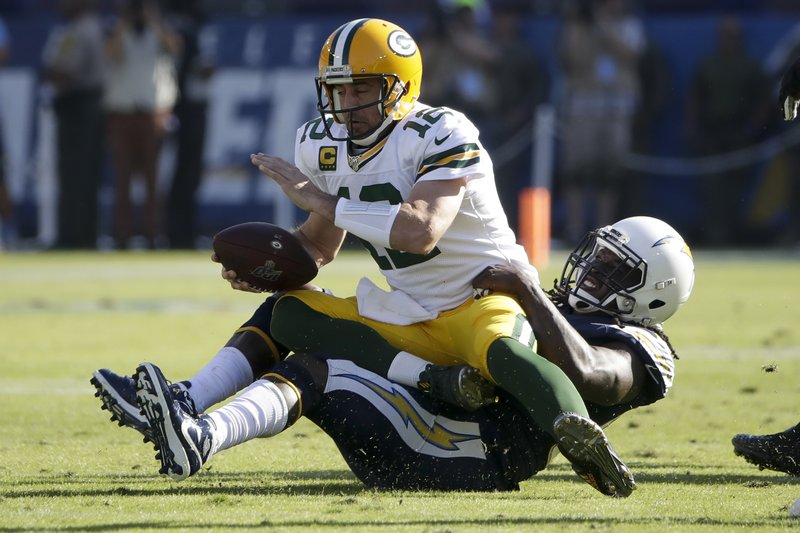 CARSON, Calif. (AP) — There’s a saying around the NBA about visiting teams that play terribly at Staples Center after spending the previous evening out enjoying Hollywood’s innumerable pleasures for young millionaires.

Aaron Rodgers wouldn’t go so far as to say explicitly that the young Green Bay Packers enjoyed too much of the good life during their weekend on the coast. But the 35-year-old superstar said something was very wrong with the Packers’ preparation before their 26-11 thrashing from the Los Angeles Chargers on Sunday.

“We’ve got to be honest with our routine and the decisions we made in the last 48 hours, and make sure that our head is in the right place the next time we come on a big road trip,” Rodgers said.

The Packers fell to 7-2 when their four-game winning streak ended in embarrassing fashion. Green Bay managed 184 total yards — nearly 200 below its season average — while yielding 442 yards to the Bolts, who blew out the NFC North leaders with shocking comprehensiveness.

“I don’t think it was complacency at all,” Rodgers said. “I just think whether it was the trip, not everybody taking care of themselves the right way over the two days, or we were just tired, or the differences in temperature. But those are just excuses, and the facts are that we just weren’t locked in from the start, and that’s a little disappointing.”

Rodgers went back to mention his offense’s poor preparation and the possible reasons for it several times during his postgame news conference. The oldest player on the Green Bay offense appeared to be highlighting a message he had already sent to his younger teammates in private about professionalism.

“This was a good slice of humble pie for us,” Rodgers said. “We’re kind of rolling, 7-1, and starting to listen to the chatter maybe a little too much. I think this will be a good thing for us.”

Other veteran leaders noticed the Packers’ lack of effort and execution in key areas.

“We just couldn’t get that spark that we needed,” said cornerback Tramon Williams, the oldest player on the defense. “We were looking for it to come from somewhere, but we just couldn’t get it for whatever reason. But at the same time, we need games like this. We’re going to be better from it.”

Rodgers went 23 of 35 for 161 yards, his lowest total in a full game since December 2015. His 61 yards passing through three quarters were his lowest career total during a game in which he played all three. He appeared to have little cohesion with his receivers, even with the return of Davante Adams from a four-game absence with turf toe.

Rodgers also got chased and battered all day by Melvin Ingram and Joey Bosa, the Chargers’ dynamic pass-rushing duo. They combined for three sacks and six quarterback hits even though the Bolts almost never blitzed, using only their four-man front.

All told, Green Bay managed only six first downs and 69 yards in the first three quarters between several sustained drives by Los Angeles.

“I’ve got to do a lot better job of putting our guys in position, because we really didn’t even get into the game plan,” coach Matt LaFleur said. “It was a spread, throw-it-all-over-the-yard kind of game, and that’s not what we want to be.”

Green Bay had only three possessions in the first half, all ending in punts. The Pack couldn’t finish a drive with a touchdown until they already trailed by 23, finally reaching the end zone with 6:21 to play.

The defense played creditably, but only slowed down the Chargers’ long drives when they reached the red zone. Green Bay finally yielded a touchdown in the third quarter on a short drive after its punt protection unit allowed Bolts rookie Drue Tranquill to block a punt.

Former Wisconsin Badgers running back Melvin Gordon then scored his second touchdown in the fourth quarter, one play after Green Bay’s Tony Brown committed defensive offside during a field goal attempt to prolong the Chargers’ drive.

From top to bottom, the Packers looked nothing like the impressive team that got off to a superb start for LaFleur and sparked immediate talk of Super Bowl contention.

But the rookie head coach isn’t worried just yet, and the Packers have no more trips to Los Angeles on their regular season schedule.

“It was a frustrating day,” LaFleur said. “We just have to hit the reset button, like we say every week, and get back to the drawing board. Just be more prepared for these situations.”