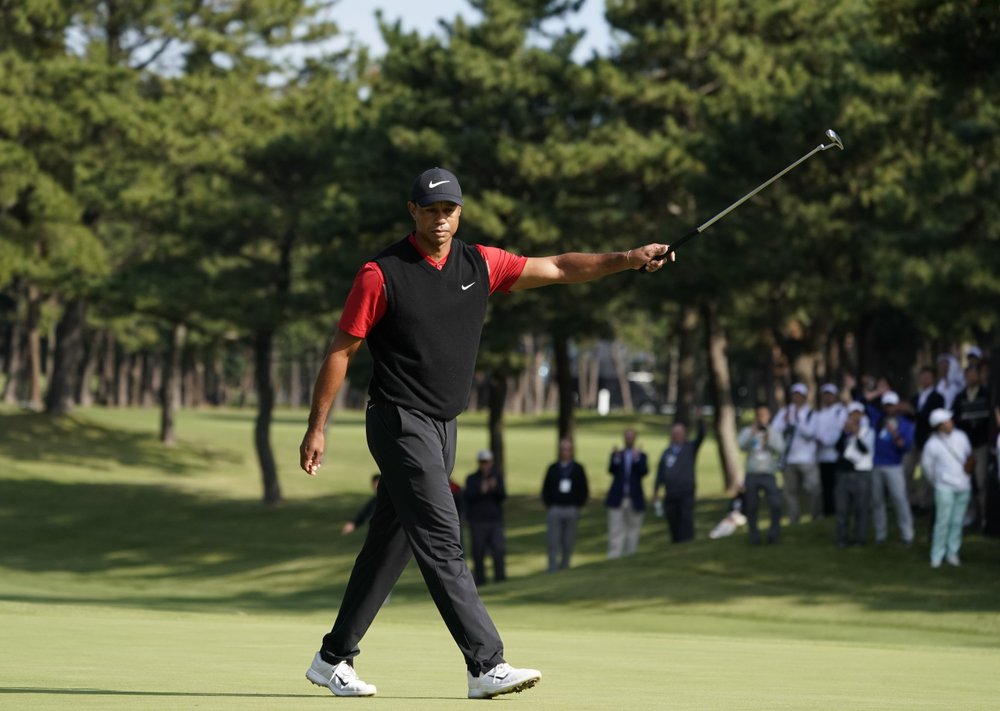 The 43-year-old American returned Monday to play the final seven holes in the rain-hit tournament, completing a 3-under 67 to beat local favorite Hideki Matsuyama by three strokes at Accordia Golf Narashino Country Club.

“It’s just crazy. It’s a lot,” Woods said. “I’ve been able to be consistent most of my career. … Today was one of those days where I was able to pull it out.”

Woods had arthroscopic surgery on his left knee two months ago — his fifth on the same problem joint. He was making his first start in his 23rd season on the PGA Tour.

“I can still manage my way around the golf course,” Woods said. “I know how to play. I was able to do that this week.”

The fourth round was suspended because of darkness Sunday, and Woods took a three-stroke lead over Matsuyama into Monday in the first official PGA Tour event in Japan.

Rory McIlroy, the highest ranked player in the field, completed his round with two birdies for a 67 to tie for third at 13 under with Sungjae Im. Im had a 65.

Woods opened with consecutive 64s, with a day off in between because of rain. He had a 66 on Sunday in the third round.

“It’s been a long week,” Woods said. “Five days at the top of the leaderboard is a long time.”

As the U.S. Presidents Cup captain, Woods was asked about picking himself for the team.

“I think the player got the captain’s attention,” Woods said.

Woods’ approach shot on the 12th found the greenside bunker. He blasted out and left himself a long par putt that he missed for bogey, cutting the lead to two strokes.

But that was the only time he would falter.

Matsuyama missed a short birdie putt on the par-5 14th with a chance to cut the lead to a stroke. Woods, playing in the group behind Matsuyama, made a birdie putt on 14 to restore the three-stroke lead.

Matsuyama cut the lead to two with a birdie on par-3 16th. On 18, his drive went into the bunker at the side of the fairway, and he hit into the greenside bunker before saving par.

Woods’ approach at the par-5 18th found the greenside bunker. He blasted to 10 feet and made the birdie putt.

It was a wild debut for the PGA in Japan. Torrential rain washed out play Friday, forcing the second round to be moved to Saturday. To make up for the lost day, the players started the fourth round immediately after finishing the third to get in as many holes as possible.

The course took on over 8 inches of rain Friday and was in remarkably good shape when play resumed on Saturday for the second round.

“This was certainly demanding,” Woods said “Being in the lead for the better part of five days puts a stress on the mind, it’s not easy to do…it’s stressful, it wears one out but somehow I was able to finish out on top and made key putts this week.”

On tying Snead’s record, Woods attributed it to consistency.

TOP PHOTO: Tiger Woods of the United States reacts after his putt during the final round of the Zozo Championship PGA Tour at the Accordia Golf Narashino country club in Inzai, east of Tokyo, Japan, Monday, Oct. 28, 2019. (AP Photo/Lee Jin-man)

0
0   0
previous Love vs. Antetokounmpo, as Bucks look to bounce back from home-opening loss
next 0-5 in World Series, Verlander eyes Astros clinch in Game 6
Related Posts