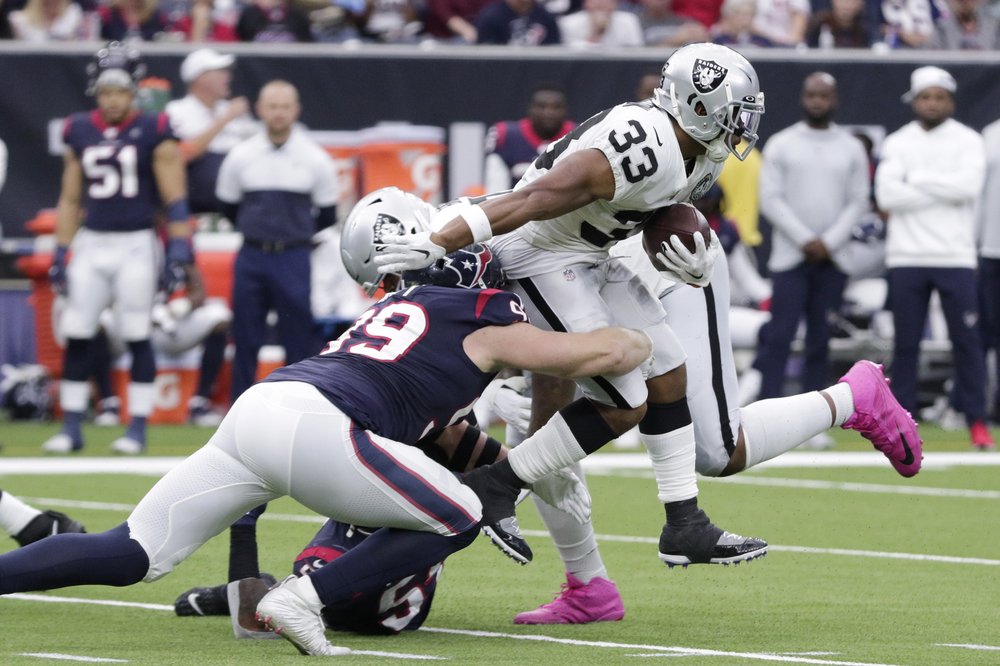 Houston DE Watt out for season with pectoral injury

Houston DE Watt out for season with pectoral injury

HOUSTON (AP) — Houston Texans defensive end J.J. Watt sustained a season-ending injury to his pectoral muscle on Sunday in a win over the Oakland Raiders.

The 30-year-old Waukesha, Wis., native was injured in the second quarter of Houston’s 27-24 win and tweeted afterward that he was done for the season.

That tweet came after this won, a video of him making a tackle for a loss.

This is the third time in four seasons that the three-time NFL Defensive Player of the Year has had a season-ending injury. He missed the last 13 games of 2016 with a back injury which required surgery and played just five games in 2017 before breaking his leg. He played all 16 games last season and was a first-team All-Pro after finishing with 16 sacks and 18 tackles for losses.

His injury is a big loss for a team which traded 2014 top overall pick Jadeveon Clowney to Seattle in August and has little experienced depth to absorb his absence.

Watt was injured when he tackled running back Josh Jacobs for a 6-yard loss in the second quarter. He went to the locker room with about 5½ minutes left in the quarter after spending a few minutes in the medical tent.

Watt had three tackles, including one for a loss, and swatted down a pass before he was injured.

TOP PHOTO: Oakland Raiders running back DeAndre Washington (33) is hit by Houston Texans defensive end J.J. Watt (99) on a run during the first half of an NFL football game Sunday, Oct. 27, 2019, in Houston. (AP Photo/Michael Wyke)

0
0   0
previous Rodgers, Jones star for Packers in 31-24 victory over Chiefs
next Trump draws boos when introduced to crowd at World Series
Related Posts