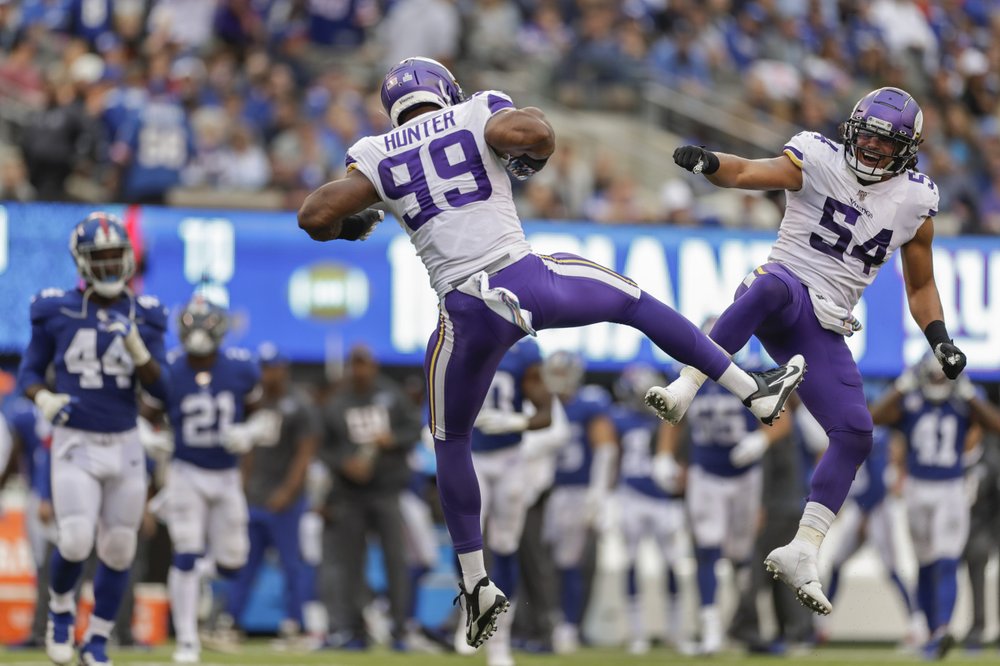 EAGAN, Minn. (AP) — For an accomplished, experienced group like the Minnesota Vikings’ defense, maintaining that edge is more of the goal than plowing new ground.

If there’s unheralded one player still primed for a breakout, though, middle linebacker Eric Kendricks would be the guy. He’s the most prominent member of the defense yet to procure any of those postseason awards, and his performance in 2019 has put him on such a track.

“I always feel like I’m just a little underrated. It is how it’s going to be,” Kendricks said. “I’m trying to be the best person I can be and trying to accomplish things that I’ve never accomplished before.”

The defense under coach Mike Zimmer has consistently been one of the best in the league, and the Vikings have largely kept up with the standard this season. Their average allowances in yards per play (4.8), yards per game (310.3) and points per game (15.5) rank fifth, fifth and sixth in the NFL, respectively, and they’re tied for eighth in the league with a 50% red zone touchdown rate with seven surrendered to opponents in 14 opportunities.

Kendricks would love to be the next name on the list.

“I would definitely say it’s on the list of things to do, but it doesn’t take over my motivation or anything like that. It doesn’t consume my thoughts,” Kendricks said. “That’s kind of an afterthought. I’m just trying to get these wins with this team and do damage and just whatever happens, happens.”

Kendricks is fifth in the NFL’s official statistics with 38 solo tackles. He’s tied for seventh with seven passes defended, one of only two linebackers in the top 12 in the league. Vikings coaches have credited him with 61 combined tackles, a whopping 25 more than the next-closest player, Barr. In Minnesota’s 38-20 win over Philadelphia on Sunday, Kendricks teamed with cornerback Mackensie Alexander on a third-down sack early in the fourth quarter to force a punt. A little later, he forced a fumble that Barr recovered to put the game on ice.

“I was into it, and I was running around,” Kendricks said. “I wasn’t trying to force things, but I was finding the ball, and in the same breath, now that I watch the film, there’s definitely things that I could’ve done to put our team in better positions at times.”

The coaching staff would concur with that.

Early in the second quarter, when Eagles quarterback Carson Wentz rolled out to his left on third-and-6, Kendricks let his man, wide receiver Nelson Agholor, slip behind him as he drifted forward. Leaping to bat the pass was his only play, and that’s what he did, nearly intercepting the ball after whirling around to try to find it.

Running back Miles Sanders also caught a 32-yard touchdown pass on a wheel route out of the backfield that left Kendricks flat-footed in the second quarter.

Selected out of UCLA in the second round in 2015 — a stellar draft for the Vikings that also yielded Waynes, Hunter and wide receiver Stefon Diggs — Kendricks has been entrenched as the middle linebacker and appeared in all but five games. There’s as much on his plate in this scheme as for any other player, but in typical rookie fashion in his first year he often overdid it, leading Zimmer to good-naturedly accuse him of playing like he’d consumed too much coffee.

Kendricks has come a long way from those days, now in the first season of a five-year contract extension valued at $50 million. He’s more than willing to embrace his status as one of the lesser-known names on this defense.

“We’ve got a bunch of studs. It is what it is,” he said. “So that’s just one of those things I feel like it’s kind of like my life story.”