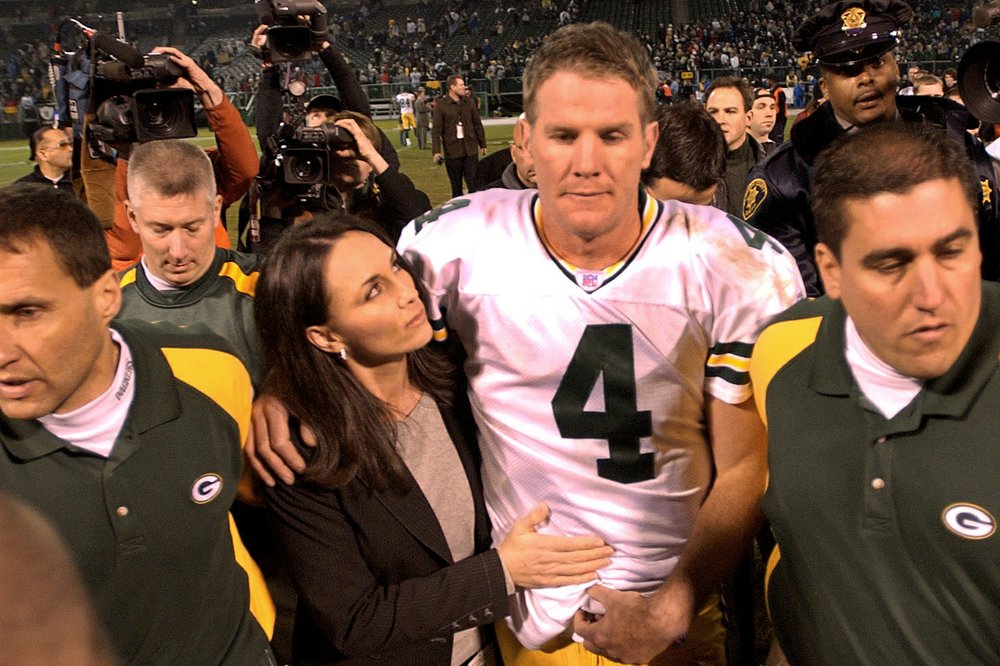 NFL at 100: Favre flawless vs. Raiders after dad’s death

NFL at 100: Favre flawless vs. Raiders after dad’s death

Brett Favre played in plenty of meaningful games with 24 playoff starts, five appearances in the conference title game and two trips to the Super Bowl on the way to the Hall of Fame.

Favre had plenty of prolific ones with two games with at least 400 yards passing and four more with at least five touchdown passes.

When it comes to emotional games, one stands out above all the rest.

Perhaps the signature moment of one of the NFL’s most storied careers for a quarterback came Dec. 22, 2003, when Favre took the field in Oakland for “Monday Night Football” the day after his father, Irv, died of a heart attack while driving in Mississippi.

Few would have questioned if Favre decided to skip the game after getting the news, but he believed his father would have wanted him to play so he took the field the following night at the Oakland Coliseum for his 205th consecutive game.

“It’s the most nervous I’ve ever been in a game,” Favre told NFL Network for a special on the 100 greatest games in NFL history. “I was so worried I would lay an egg. I think people who were watching would say, ‘Hey it’s understandable. His father just passed away.’ I didn’t want that, I wanted to play better than I had ever played before.”

He did just that, throwing for 311 yards and four touchdowns in the first half alone on an emotional night that featured a respectful ovation from the usually hostile Raiders crowd.

Favre finished the game 22 for 30 for 399 yards — 3 shy of his career best at the time — then embraced his wife, Deanna, on the field in the fourth quarter before flying back home to Mississippi after the game.

The game left a lasting impact on NFL fans everywhere, especially those in Wisconsin who were die-hard Packers supporters. That included one 14-year-old high school freshman in Pewaukee, Wisconsin, who would become a star of his own one day.

“I remember it extremely well. I mean I don’t know the stats, but I’m pretty sure that back in the state of Wisconsin there was probably 100 percent of televisions turned into that game,” Houston Texans defensive lineman J.J. Watt said. “It’s really hard to explain what it felt like, I was young, so it’s not like I really understood everything that was going on. But even I could tell that something special was happening that night. … Favre was just chucking the ball up and it ending up in the Packers’ hands. It was a magical, special thing to watch and the emotions that you saw out of him and his family, it was cool to watch.”

Here’s a look at how that memorable game affected each team in subsequent seasons:

The performance was one of the last great moments in Favre’s career in Green Bay that had featured a Super Bowl title following the 1996 season, another trip to the title game the following season and three MVP awards.

The Packers lost in overtime in the division round of the playoffs that season when Philadelphia converted a fourth-and-26 in the closing minutes to set up the game-tying field goal.

Favre threw four interceptions in a wild-card loss at home the following season.

Green Bay then drafted Aaron Rodgers in the first round in 2005 and Favre’s tenure in Green Bay ended when he threw an interception in overtime that set up the game-winning field goal for the Giants in an NFC title game win at Lambeau Field.

The loss compounded the mistake late owner Al Davis made back in 1991 when he disregarded his scouts and drafted Todd Marinovich instead of Favre.

The 2003 season started a long run of losing after the team had won three straight AFC West titles and gone to the Super Bowl following the 2002 season in the only run of success following the move back to Oakland in 1995.

Coach Bill Callahan was fired after the season. The Raiders didn’t post a winning record or playoff berth again until 2016.

1968: These interconference foes have met only 13 times ever and the only other memorable one was the first — a matchup in the second Super Bowl.

Oakland won the AFL that year and it gave Davis a chance to deliver a blow to commissioner Pete Rozelle and the NFL. Davis was named commissioner of the AFL in 1966 and sought to bring down the more established league. Instead, AFL owners decided to merge with the NFL and the deal left Rozelle as commissioner. Davis went back to the Raiders to run the team.

His chance at revenge was quickly snuffed out by the Packers in Vince Lombardi’s final game as coach in Green Bay.

Bart Starr threw a 62-yard TD pass to Boyd Dowler to give the Packers a 13-0 lead in the second quarter and they were never threatened. Herb Adderley’s interception return for a TD against Daryle Lamonica made it 33-7 and the Packers won their second straight Super Bowl with a 33-14 victory.

TOP PHOTO: FILE – In this Dec. 22, 2003, file photo, Green Bay Packers quarterback Brett Favre is escorted off the field with his wife, Deanna, after the Packers defeated the Oakland Raiders 41-7 in an NFL football game in Oakland, Calif. When it comes to emotional games, his four-touchdown against the Raiders the day after his father’s death in 2003 stands out above all the rest. (AP Photo/Paul Sakuma, File)