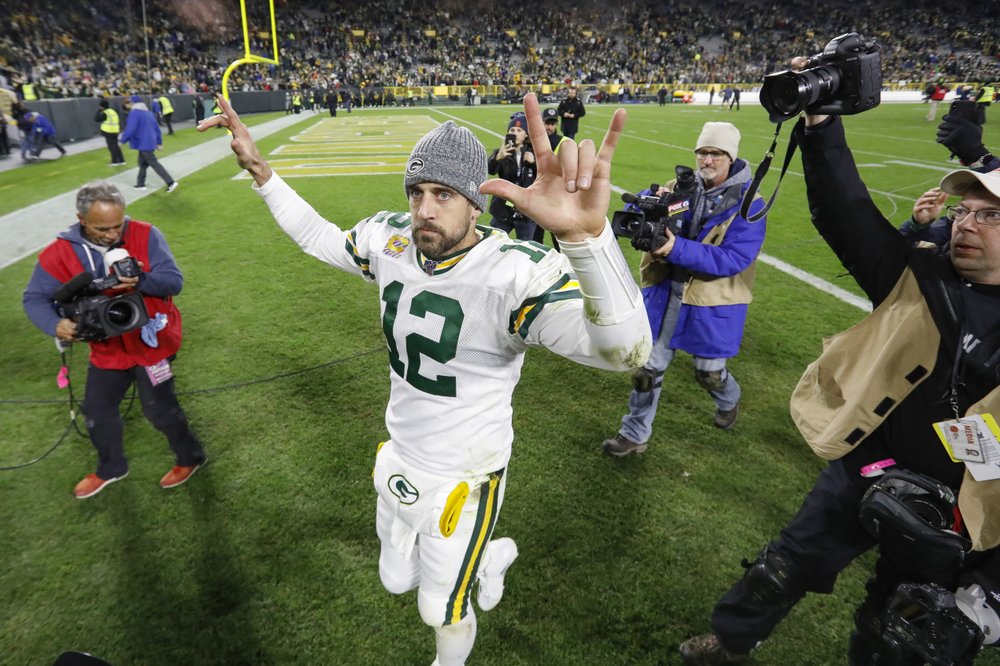 Another frustrating weekend of flag-filled football culminated with the Packers’ 23-22 last-second win over the Lions on Monday night thanks to two phantom hands-to-the-face calls on Detroit defensive end Trey Flowers.

The first one came with about 10 minutes left in the fourth quarter and Detroit comfortably ahead 22-13. The flag negated a sack of Aaron Rodgers that might have sealed Green Bay’s fifth straight loss to the Lions and instead led to Allen Lizard’s 35-yard TD catch that made it 22-20.

The second one came on a third-down incompletion by Rodgers which would have forced the Packers to kick a field goal with about 90 seconds left, plenty of time for Detroit to respond with its own field goal drive. Instead, the Packers ran the clock down to 2 seconds before Mason Crosby kicked the game-winning 23-yarder as time expired, then did his very first Lambeau Leap.

Flowers, who had never been whistled for hands-to-the-face fouls in his five-year NFL career, said he was using the same move all game, putting his hands on left tackle David Bhaktiari’s chest, not his neck or face.

“I didn’t think hands to the chest was a penalty,” Flowers said.

Referee Clete Blakeman said each of the calls was made by umpire Jeff Rice, and he discussed the last one with him.

“Basically, it’s for illegal use of the hands, hands-to-the-face foul,” Blakeman told a pool reporter. “To be a foul, we basically need some forceful contact that’s prolonged to the head and neck area of the defender.

“So, in his mind he had pinned him back, it was prolonged, and that’s what created the foul.”

The Lions tried to let the Packers score a touchdown after Flower’s second flag so Matthew Stafford would have time to drive Detroit downfield, but Jamaal Williams wisely took a seat the 3 to allow the clock to keep ticking away.

Monday Night Football analyst Booger McFarland complained about the first call on Flowers and was even more critical of the second one, saying, “you basically end the game on what I call a bogus hands-to-the-face.”

Social media was abuzz over the frivolous flags.

“The referees are destroying the NFL game by game,” tweeted ex-NFL star Matt Forte . “It’s a shame because of how much work is put in and to have games literally won or loss by bad calls in crucial situations.”

Barry Sanders chimed in , tweeting, “That is sickening… the @NFL needs to look at a way to prevent that from happening. Two phantom hands to the face calls really hurts us tonight. Yes, we could have scored TDs, but @Lions played too well to have the game end this way.”

Instead of leaving Lambeau Field atop the NFC North at 3-1-1, the Lions limped out 2-2-1 in last place while the Packers improved to 5-1.

Champ Bailey was honored at halftime in Denver for his Hall of Fame induction last summer and his induction into the Broncos’ Ring of Fame. After a ceremony Friday night in which his 8-foot bronze pillar was unveiled, Bailey spoke about the positive feedback he’s gotten for bringing up race relations in his Hall of Fame speech in Canton, Ohio.

“It feels good because any time you have a platform like that you want to use it the right way,” Bailey said. “You want to make sure you take advantage of the opportunity, let people know how you feel, what’s important to me, what’s on your mind and I think it’s only fitting to do it when millions of people are watching you.”

After recording his 20th career interception Sunday against Tennessee, Broncos cornerback Chris Harris Jr. dedicated it to his mentor and said he’d give the ball to Bailey.

“I’ve locked him up numerous times. I don’t even know how many times I’ve shut him down,” Harris shrugged. “There’s nothing to really talk about with him. I’m ready for Tyreek Hill.”

Allen took to social media to voice his displeasure over his stat line against Denver, commenting on an Instagram post of a Chris Harris Jr. fan account, “Now, y’all know damn well that boy can’t hold my jockstrap. Stop it.”

Unless that tape was replaced, it showed the Allen, the league’s leader in catches and receiving yards, catching a season-low four passes on six targets for a measly 18 yards on a day the Chargers failed to score an offensive touchdown.

Ravens coach John Harbaugh says the NFL has deemed illegal the kickoff dropkick that Justin Tucker used against Kansas City last month with Baltimore trailing 33-28 with 2:01 remaining in a Week 3 game. Harbaugh said the league told him it was legal when he raised the plan with NFL headquarters before using it.

″We were in contact with the league officiating office all the way through ,” Harbaugh said, via the Ravens Twitter account. “We didn’t just pull it out, and decide to try it, and sneak it past them.”

Jets safety Jamal Adams, who called the NFL “a damn joke” after he was fined $21,056 for a hit on Browns QB Baker Mayfield in Week 2, won his appeal and relished in the victory that came just before the Jets’ first real win of the season, over the Cowboys.

“I’m just happy that won’t be taken out (of my paycheck) because now I can spend that lovely money on my mother for her birthday,” Adams told reporters Thursday. “I’m excited about that.”