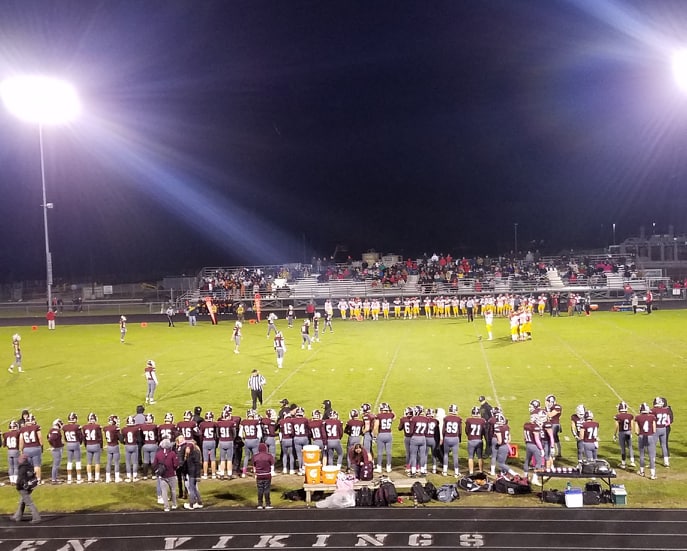 A game between two 6-1 teams lived up to the hype in Holmen on Friday evening, as the Sparta High School football team escaped with a 25-20 victory.

Possessions were few and far between in the first half.

Sparta took advantage of a Holmen fumble in the Spartans red zone, as Cole Wiesnewski took a quarterback draw for a 3-yard score to make it 6-0.

That score would hold until 4:16 left in the first half, after a sustained drive, Holmen punched it in with Jaedon Abraham from 6 yards out.

The Vikings held a 7-6 lead at halftime.

After an initial stand by the Holmen defense in the third quarter, the offense coughed up the ball to put Sparta in great field position.

The Vikings’ offense wouldn’t be on the field long before turnovers bit them again.

Sparta returned an errant pitch from quarterback Cameron Weber to the end-zone to make the score 18-7.

After another defensive stop, Sparta took advantage of great field position to score on a 24-yard jet sweep from wide receiver Corbin Hauser to put the Spartans up 25-7 with 5:05 left in the quarter.

Holmen would mount its charge in the fourth. First, Weber connected with Adam Quam from 26 yards and the score on the opening play of the quarter.

After a stop and another long drive, Holmen went back to their big fullback, Brett Holden, who plunged in from 3-yards out to cut the Sparta lead to five with 4:15 remaining.

Holmen recovered an onside kick but fumbled for the fourth time just a few plays later.

The Vikings would get one final stop but time ran out on the comeback, with penalties riddling the final drive.

Holmen travels to Onalaska on Friday for a chance to share the MVC crown.

If Holmen wins, Sparta will join the pair for a three way tie for the championship.