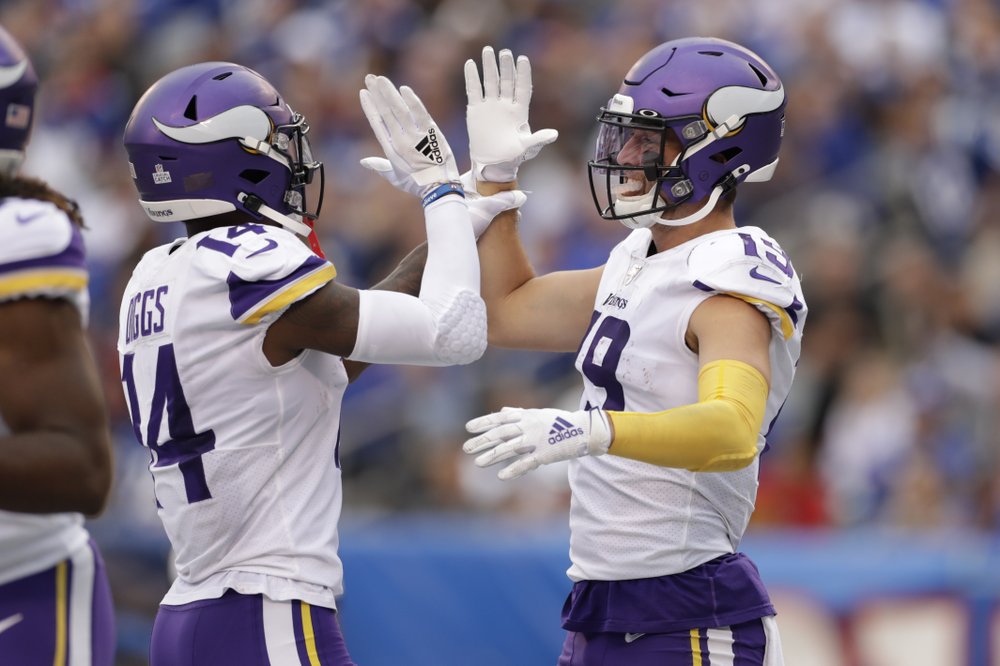 MINNEAPOLIS (AP) — When the Philadelphia Eagles arrive in Minnesota, their first visit since winning Super Bowl 52, there might be some subtle reminders at U.S. Bank Stadium of the scene that night when the franchise’s first Lombardi Trophy was secured.

They’ll have to look and think hard, though. The interior decoration will be different, downtown Minneapolis won’t be decked out for the seminal event, and while the air might be chilly there won’t be below-zero temperatures like that frosty week in early February 2018.

Two seasons later is like an eternity in the what-have-you-done-lately NFL, so don’t expect the Eagles (3-2) to treat this game on Sunday against the Vikings (3-2) as a stop on some nostalgia tour of the Twin Cities area.

The Eagles reached that Super Bowl, of course, by blowing out the Vikings in the NFC championship game in Philadelphia. Watching the Eagles celebrate on their home turf two weeks later was tough to take, but the Vikings were at least able to get any lingering bitterness out of their system last fall with a victory in Philadelphia.

“No real ill feelings. They won fair and square,” wide receiver Stefon Diggs said. “So that was more like a last year thing when we got to play them again. But this year is just like going to another game, trying to prepare the right way and just get a win.”

Here are some key angles to the game:

The Eagles have the NFL’s top run defense since 2016 and are allowing a league-low 63 rushing yards per game this season, but the Vikings will present their greatest challenge on the ground yet. Dalvin Cook is second in the NFL with 542 rushing yards, averaging 5.9 yards per attempt, and Alexander Mattison has chipped in with 189 yards on an average of 5.6 yards per carry.

The Eagles were interested in Cook in the 2017 draft, but he went to the Vikings at No. 41 overall, two ahead of Philadelphia’s spot in the second round.

“I really liked his explosiveness, not only with the ball in his hands, but he can catch the ball out of the backfield,” Pederson said. “There was a lot of explosive plays on his tape. I was really comfortable with him, and we were close to pulling the trigger on that one.”

The Eagles’ pass rush busted out of a slump in a big way by recording 10 sacks against the New York Jets last week after only registering three in the first four games. Defensive end Brandon Graham had a career-best three sacks and cornerback Orlando Scandrick had two sacks plus two forced fumbles, one that he returned for a touchdown in his first game in Philadelphia.

“I’m just happy we all went out there and had one of those games we’ve been dreaming about as a defensive line,” Graham said. “We’re coming together at the right time, especially after all of the emotional games we have played. We have to keep it going. We have a lot of people that were new. We need everybody.”

Vikings quarterback Kirk Cousins, who has been sacked 11 times this year, is plenty familiar with the Eagles and their front seven from his time playing them twice per season with Washington.

“I have so much respect for their pass rush. Every time I’ve played them, you know what they can do and the effect they can have on a game,” Cousins said. “I think it was a big reason why so many of those guys have Super Bowl rings, because of the way they can rush the passer.”

Diggs created a stir last week by missing practice, an absence that drew him a fine of more than $200,000, and later acknowledging his dissatisfaction with the state of the team in light of an ugly loss at Chicago during which Cousins and the passing game faltered. After the Vikings beat the New York Giants last week, though, the good vibes were back in the locker room, and Diggs said he never wanted out.

“I wasn’t unhappy or uncomfortable with my role. I said I wanted to win. That’s where my frustrations were,” Diggs said.

With 11 of the 16 teams in the NFC toting two or fewer losses, the competition for six spots in the playoffs over the final two-thirds of the season has set up to be as fierce as ever. As far as mid-October games go, this one will carry a lot of weight for both the Eagles and the Vikings, both in their respective division standings and for wild-card capital that could be useful in a crowded race down the stretch.

“They’re trying to catch momentum just as we are, coming off a win, so it’s going to be a good one,” Diggs said.