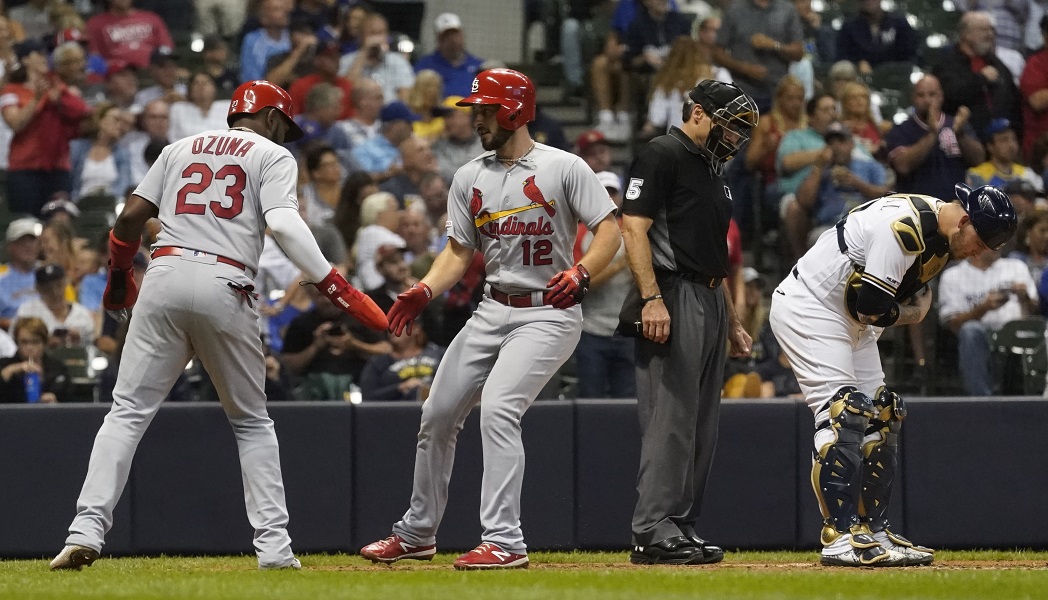 The Cardinals, who have won five straight, jumped on starter Gio Gonzalez (2-2) for eight runs in the first two innings en route to their 14th victory in 17 games.

Yadier Molina and Paul DeJong each homered and drove in three runs for St. Louis, which moved to a season-high 14 games above .500. The Cardinals extended their lead in the N.L. Central to three games over idle Chicago. The third-place Brewers dropped 5½ back.

John Gant (9-0) relieved Wainwright and struck out three in 2⅓ hitless innings for the victory.

Molina’s bases-loaded single with two outs in the first put the Cardinals up 2-0.

Molina’s fifth homer, a solo shot in the fourth, made it 9-1. DeJong added a two-run homer, his 24th, in the sixth and a sacrifice fly in the eighth.

The Cardinals manufactured a run to open the decisive second when Harrison Bader reached on an infield single, advanced on a sacrifice and took third on an errant pickoff throw by Gonzalez.

Dexter Fowler singled in Bader to make it 3-0. Tommy Edman singled and Paul Goldschmidt walked. Ozuna cleared the bases with a double down the right-field line.

Cardinals: OF Jose Martinez, on the 10-day injured list (right shoulder AC joint sprain) was scheduled to begin his rehab assignment Monday with Double-A Springfield. “He’s going to work defensively before the game and he’ll DH in the game,” manager Mike Shildt said. . IF Kolten Wong, who left Saturday’s game after fouling a ball off his right big toe, was not in in the lineup, but is improving. “I talked to him a little bit and it looks like he’s going to be a bit of a warrior,” Shildt said. “I know he’s in some pain. We’ll evaluate him and take it day-by-day.

Brewers: 3B Mike Moustakas left the game in the third inning with pain in his left palm and wrist after being struck by hard-hit bouncer by Harrison Bader the previous inning.