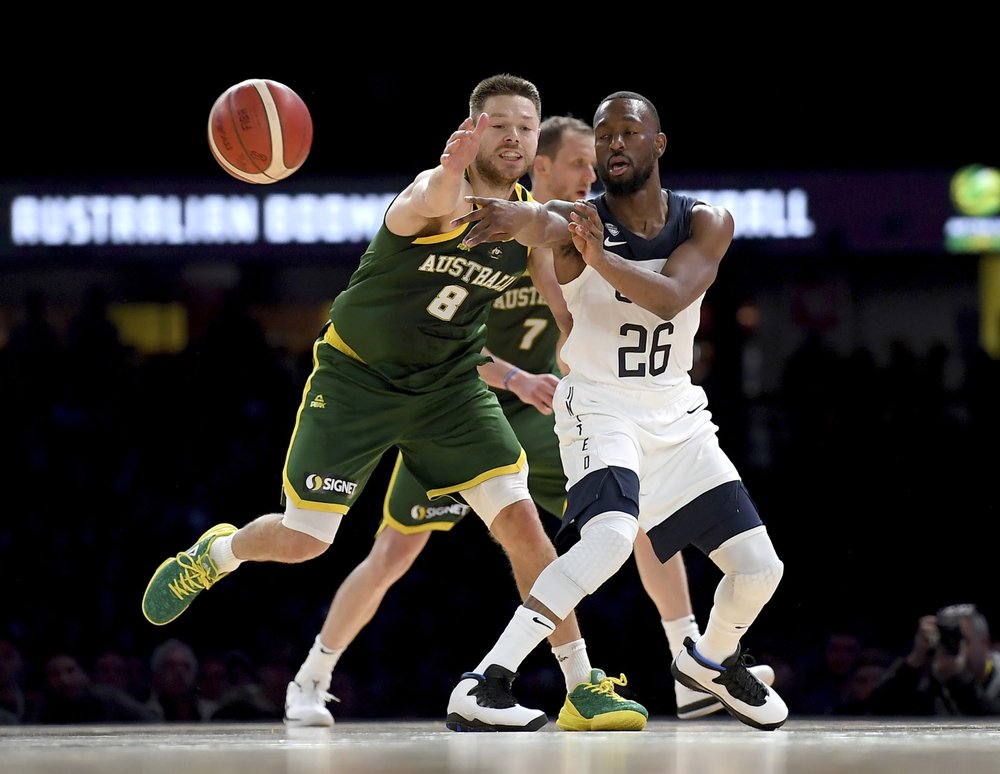 MELBOURNE, Australia (AP) — With his team playing on a raised basketball court in a stadium normally used for soccer and cricket, U.S. coach Gregg Popovich said he felt like he was on a movie set.

“I kept looking behind me because I knew I was going to fall off the stage,” he said.

But once the game started, Popovich thought it all seemed normal. And if it had been a movie, Popovich surely would have liked the ending.

Kemba Walker scored 23 points, Myles Turner added 15 points and 14 rebounds, and the U.S. topped Australia 102-86 on Thursday before a crowd of 51,218 — billed as the largest crowd ever to watch a basketball game in Australia.

“We have guys that are just starting to play with each other,” said U.S. guard Donovan Mitchell, who had 13 points. “We got off to a little bit of a rough start in the first half, but the third quarter, we really picked it up defensively.”

Patty Mills and Chris Goulding scored 19 points each for Australia, which stayed with the Americans for about 2½ quarters before seeing chances slip away at Marvel Stadium — transformed into a make-shift basketball arena for two games against the Americans, tune-ups for both sides before the World Cup starts next week in China.

“It was an awesome opportunity,” Mills said. “I think basketball in this country has been waiting for something like this.”

After Australia briefly took the lead at 45-44 early in the second half, the Americans scored 13 unanswered points, including three straight 3-pointers by Turner, Harrison Barnes and Mitchell, to go up 57-45.

Walker was one the keys for the second-half resurgence for the Americans, scoring 21 of his 23 points after halftime.

“I’m one of the leaders of this team, so it’s important for me to set that tone,” the Celtics guard said.

The roof of Marvel Stadium was closed and the court was placed in the middle of the field surrounded by hundreds of white chairs, more than 20 rows deep, for fans who paid for floor seating.

Despite the huge crowd, Australian media reported that some fans were issued refunds because they bought tickets based on promotional materials depicting Stephen Curry and LeBron James — who were part of the U.S. player pool when the deal was struck last year to play these games. Neither Curry nor James is on the U.S. roster for the World Cup.

Australia was also without its biggest star, Ben Simmons, who has opted not to play in the World Cup. Still, the Boomers starting lineup included four NBA players: Mills, Aron Baynes, Joe Ingles and Matthew Dellavedova.

And the Aussies gave their crowd some thrills — like a run just before halftime that cut the U.S. lead to 44-43 after back-to-back 3-pointers by Goulding and six straight points by Mills.

The win was the 78th in a row in major international exhibitions and competition for the U.S. national team, a streak that started with the bronze medal game of the 2006 world championships. It encompasses gold-medal runs at the 2010 and 2014 World Cups, the Olympics in 2008, 2012 and 2016, and the FIBA Americas tournament in 2007.

USA: Mitchell wrote “End Gun Violence” on his shoes before the game to remember the victims of the El Paso and Dayton mass shootings … Boston’s Marcus Smart, who is still working his way back from a calf injury that popped up about two weeks ago during training camp in Las Vegas, did not play. … It was the first meeting between the national teams since the Americans won 98-88 at the 2016 Rio de Janeiro Olympics on their way to a gold medal.

Australia: Actor Russell Crowe, who spends most of his time living in Australia, was part of the massive crowd. … In a sight that NBA fans are used to, Dellavedova dived on the floor for loose balls three times in the game’s first three minutes — including on the opening tap. … Mills gave Popovich, his longtime coach in San Antonio, a massive hug courtside just before the game started.

Jayson Tatum got knocked over by a defender in the third quarter and tumbled backward somewhat awkwardly — the back of his head falling into Walker’s knee. Tatum was shaken up briefly but remained in the game.

The teams meet again in Melbourne on Saturday.