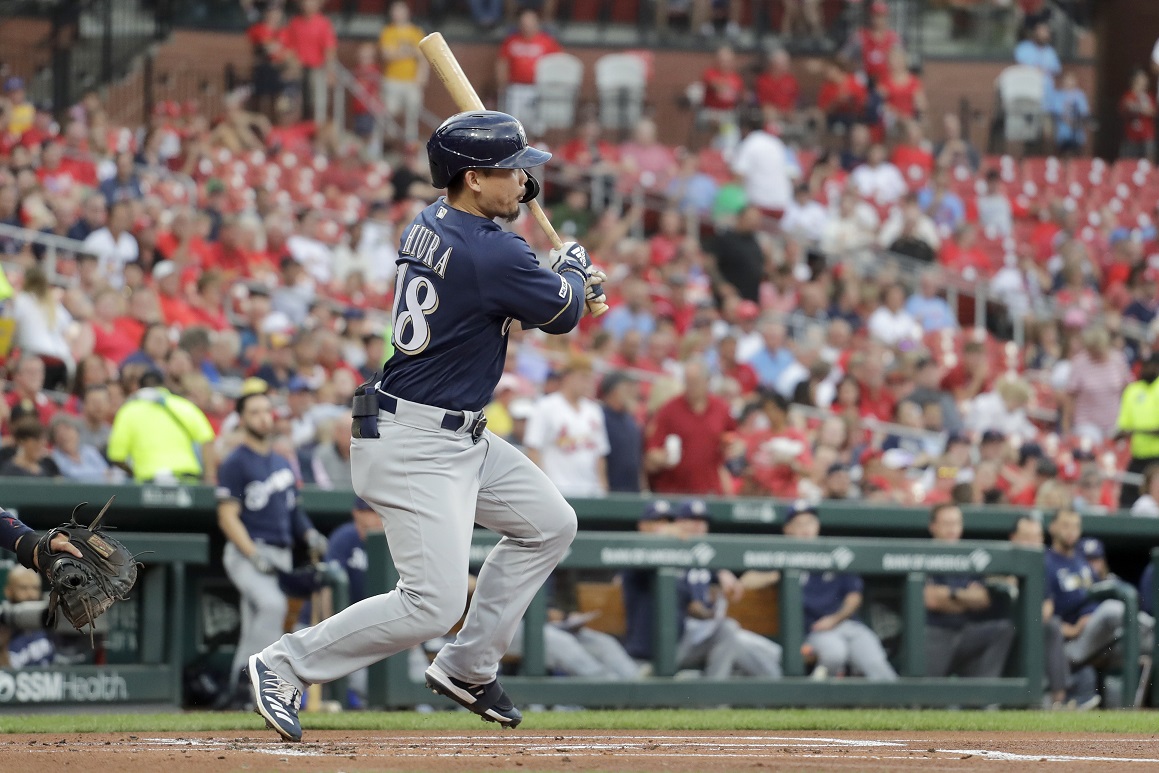 “But it was pretty important,” he said.

Moustakas homered and Keston Hiura drove in a pair of runs to lead the reeling Brewers to just their third win in the last nine, 5-3 over the Cardinals on Wednesday night.

The game was stopped after 7 1/2 innings and made official following a rain delay of 66 minutes.

Milwaukee broke a six-game losing streak against the Cardinals, who were knocked out of first place in the NL Central — falling one-half game behind the Cubs. Chicago beat San Francisco 12-11.

Milwaukee lost four of the first five in the six-game trip including the opening two of the three-game set to the Cardinals.

“It was a tough trip, but we ended on a good note,” manager Craig Counsell said.

“You lose those first two, but you make some ground up by getting that last one,” Houser said. “We (didn’t) get swept, it’s a big step.”

Junior Guerra got the last out in the bottom of the seventh and earned his third save.

Moustakas, who also walked three times, hit a three-run homer in the first off Adam Wainwright (9-9) to highlight a four-run outburst. Hiura had run-scoring hits in the first and fourth innings for a 5-0 lead.

“He made a really good pitch and I got lucky,” Moustakas said of his 31st homer of the season. “I was able to stay back just enough and get the barrel to the ball.”

“I had horrible fastball command,” Wainwright said. “Did not have good stuff and was just out there trying to battle.”

The Brewers needed just 17 pitches to go in front 4-0 as five of the first six hitters had hits.

“Great first inning,” Counsell said. “That was the game for us offensively.”

Moustakas added: “This offense, we can break out at any time. We put together some really good at-bats early in the game.”

St. Louis capitalized on a pair of errors to climb to 5-2 in the fifth. Yadier Molina’s double brought the Cardinals to 5-3 in the sixth.

Cardinals: St. Louis OF Tyler O’Neill went 1 for 3 in a rehab stint Wednesday for Triple-A Memphis. He missed the last 18 games with left wrist strain. “There’s no crystal ball on that. He’s missed some time so we think some at-bats are important,” St. Louis manager Mike Shildt said. “Like most things, the player will let you know when he’s ready.”

Brewers: RHP Jordan Lyles (7-8, 4.96 ERA) will face Arizona RHP Merrill Kelly (9-12, 4.63) on Friday in the first of a three-game series in Milwaukee. Lyles has a 7.23 ERA in 20 career games against Arizona. He is making his fifth start for the Brewers after being acquired from Pirrtsburgh in exchange for RHP Cody Ponce on July 29.

Cardinals: RHP Miles Mikolas (7-13) squares off against Colorado RHP German Marquez (12-5, 4.71 ERA) on Thursday in the first of a four-game set in St. Louis. Mikolas is 0-0 with a 5.40 ERA in four career appearances vs the Rockies.

TOP PHOTO: Milwaukee Brewers’ Keston Hiura follows through on an RBI single during the first inning of a baseball game against the St. Louis Cardinals Wednesday, Aug. 21, 2019, in St. Louis. (AP Photo/Jeff Roberson)