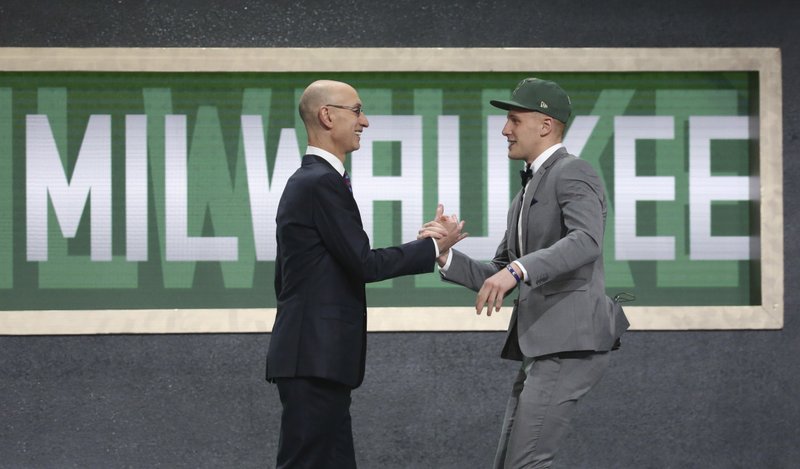 Mindful that it was awkward for draft picks this year who were selected by one team and had already been traded to another — but because of league rules, were unable to be introduced by their actual franchise for more than two weeks — Silver said there was discussion Tuesday at the league’s board of governors meeting about how to change that going forward.

Several ideas are under discussion, including changing the rules about how and when draft-night trades can be announced. It could be earlier next season and not necessarily attached to the early July end to the moratorium on trades and certain signings.

“We’ve got to fix that,” Silver said.

First-round picks were issued hats to wear on stage at the draft, corresponding with the team that chose them. De’Andre Hunter went No. 4 overall, taken by the Los Angeles Lakers. His rights had been traded twice — first to New Orleans as part of the Anthony Davis deal, then to Atlanta. But since neither of those trades could be finalized before July 6, Hunter wore a Lakers cap on stage.

There are plenty of changes that will be under consideration in the next few months, including one about the rules regarding the start to the negotiating period for free agents. Silver said that was also a topic among the board of governors on Tuesday.

For the draft night-traded players, it’s about more than the hats. Because some draftees couldn’t be part of their franchises before July 6, they were assured of missing the start of NBA Summer League. It cost a few players the chance to play in summer league at all, which disappointed many of them.

That won’t be an issue next year, with Summer League in Las Vegas scheduled to begin on July 10, 2020, long after the NBA’s new league year is likely to begin. So any draft pick that gets traded on draft night should, in theory, be with his actual team in plenty of time to take part in summer contests.

But this year, it was an issue.

Former North Carolina forward Cam Johnson wound up with Phoenix after being drafted No. 11 by Minnesota. By the time the draft could be executed, the Suns felt it was too late to put Johnson and Jerome — the No. 24 pick whose rights were traded twice on his way to Phoenix — on the floor for summer league.

So they remained in a cautious state of limbo for a couple of weeks, because an injury could have potentially derailed any trades.

“The one thing I was told was just to lay low,” Johnson said. “As much as I wanted to go out there, I wanted to play pickup, I was back at Carolina for a week and there were alumni games and all that that I didn’t really take part in because I was told to lay low — which I did. A lot of court workouts, a little one-on-one every now and then, a lot of lifting, staying under the radar but continuing to work.”

Atlanta general manager Travis Schlenk said he thought this year was an outlier on the picks-being-traded front, simply because of how many teams found themselves in situations where moves were possible.

The Hawks introduced their draft picks, Hunter and Bruno Fernando, in Las Vegas this past weekend instead of in Atlanta, because both were draft picks whose rights were held up in trades until the moratorium was lifted and swaps could be finalized.

“It’s a hard situation, because you don’t have their rights even though everyone kind of knows it,” Schlenk said. “I’m sure the league will look into it to see what they can do. They take, obviously, tampering and salary-cap circumvention and trying to get around it very seriously, so I’m sure they will take a look at it.”

0
0   0
previous Analysis: It’s a new day in the NBA, and a welcomed change
next Summer League winds down, and now, maybe, some NBA rest
Related Posts

Brogdon, Parker, Len all reveal they have coronavirus