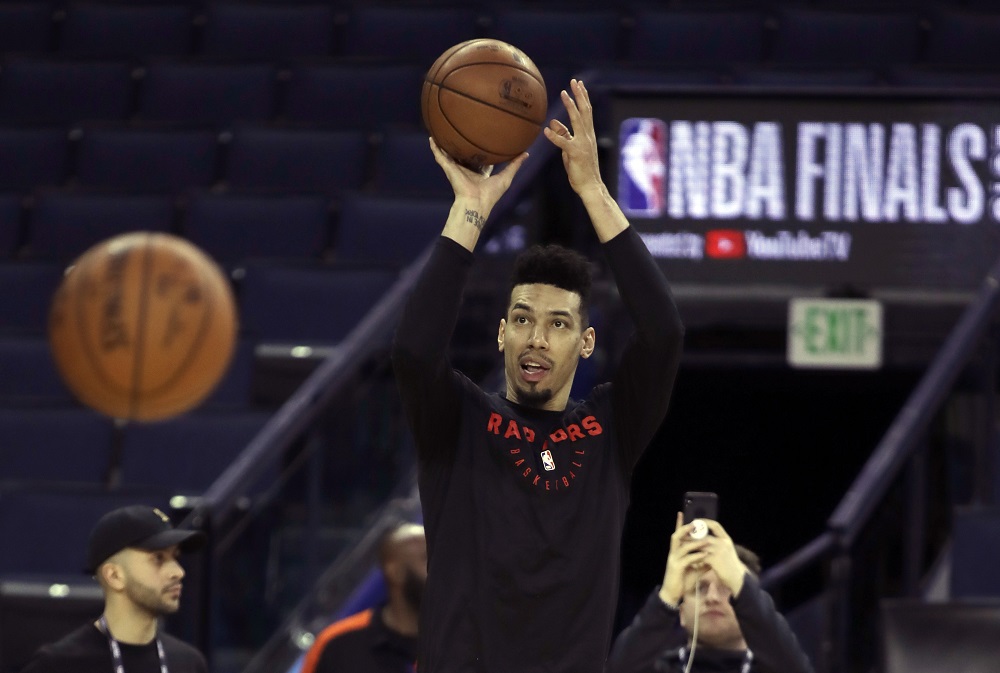 The finals are a happy stage for Green, who has been in the title-deciding series three times now and has put up big numbers in each of those trips. The trend has continued in this series against Golden State, and Green’s six 3-pointers were a huge factor in the Raptors’ Game 3 win that put them up 2-1 in the series.

Game 4 is on Friday, and Green can expect to see a lot more defensive attention from the Warriors.

“Our defense was poor last night and in particular several times leaving Danny when we didn’t need to,” Warriors coach Steve Kerr said Thursday. “He’s a shooter who commands attention and respect. And there were at least three of his shots where we just drifted away from him, and we have got to stay connected to him.”

Green was 6 for 10 from long range in the Raptors’ win Wednesday. He was just 6 for 32 from 3-point land in the six games it took Toronto to oust Milwaukee in the Eastern Conference finals.

“I don’t think it’s the stage,” Green said. “I think it’s just the life of a shooter. Sometimes you have ups and downs and I think luckily, during this time, I’ve had some ups.”

He’s had a lot of them in the finals.

There are 46 players in NBA history to have made at least 15 3-pointers in the finals. Of those 46, only two have done so while shooting at least 50% from beyond the arc.

“Danny’s buckets, I think, boosted our whole team’s confidence,” Raptors coach Nick Nurse said. “We’re kind of used to most of the year relying on those.”

Ray Allen shot 43% from 3-point range in finals games. Golden State’s Kevin Durant is also at 43%. Larry Bird, 42%. Raptors forward Kawhi Leonard, 41%. Warriors sharpshooter Stephen Curry, who has made more 3s than anyone in finals history, is just under 40% in those games from deep. Warriors guard Klay Thompson, 38%.

Even Kerr, who was as good a shooter as one could find in the NBA when he played, was a 28% guy from beyond the arc in his finals career.

That’s where he was at following his first attempt. And when a shooter sees the first shot of a game go down, the rim tends to get bigger.

Curry blamed himself for some of Green’s Game 3 success, saying that first shot was one he should have contested better.

“Early in the first quarter I gave up a 3 to him, or I let him get open for a 3 in the corner without really making him feel my presence at all,” Curry said. “And shots like that for a great shooter just build confidence, and he fed off of that the rest of the game.”

The Warriors know their defense has to get better, and with an elite defender like Thompson — who missed Wednesday with a strained hamstring — expected to be back on the floor for Game 4, they should be better on that end.

Thompson’s presence alone won’t be enough. If the Warriors pay too much attention to Green, he’s perfectly fine giving up the ball.

“I’m sure they’re going to do a better job, trying to make us feel them,” Green said. “But you do that, you’ve got to pick your poison. You’ve got to guard me or double-team Kawhi. Stay stuck to me, it’s going to leave open lanes … they’ll have to pick and choose. If we use our pace and move the ball like we know we can, we’ll have open lanes for everybody.”