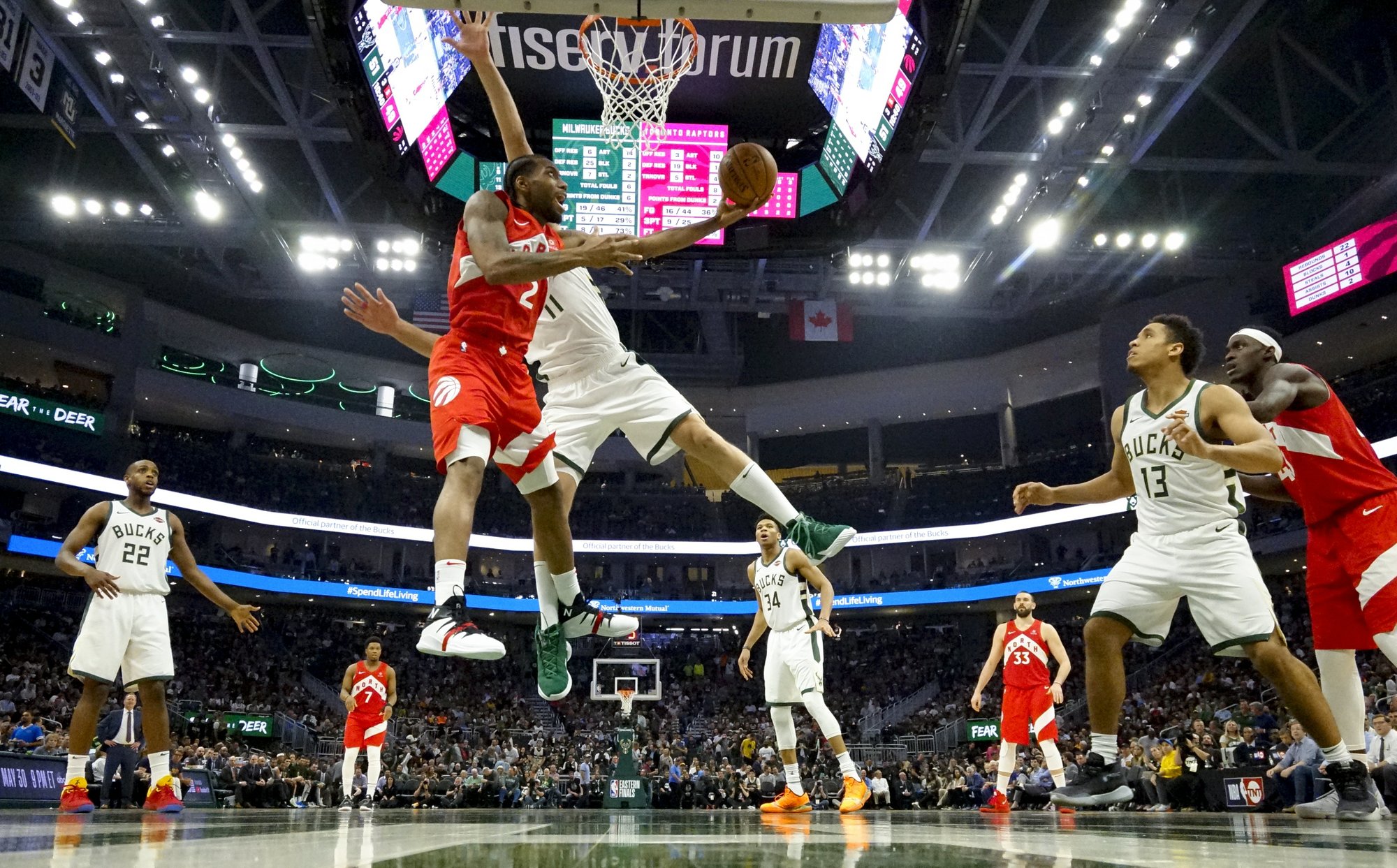 Bucks on brink of elimination, after Raptors’ Leonard scores 35 in 105-99 win

Bucks on brink of elimination, after Raptors’ Leonard scores 35 in 105-99 win

MILWAUKEE (AP) — Kawhi Leonard scored 35 points and the Toronto Raptors beat the Milwaukee Bucks 105-99 on Thursday night to take a 3-2 lead in the Eastern Conference finals.

Leonard showed no obvious signs of the leg soreness that bothered him in Toronto’s victories in the previous two games, hitting the 30-point mark for the fourth time in the series. He made five 3-pointers and had seven rebounds and nine assists.

Fred VanVleet scored 21 points, hitting seven 3s. Kyle Lowry added 17 as the Raptors put themselves in position to advance to the NBA Finals for the first time. A victory at home Saturday would set up a matchup with two-time defending champion Golden State.

The Raptors battled out of an early 14-point hole, then got 15 points from Leonard in the fourth quarter to send the top-seeded Bucks to their first three-game losing streak of the season.

Giannis Antetokounmpo had 24 points for Milwaukee hours after being announced as a unanimous first-team, All-NBA selection. Eric Bledsoe scored 20 and Malcolm Brogdon added 18 points and 11 rebounds in his return to the starting lineup.

“It’s first to four. We’ve got to go to Toronto, get a game. I think the group will be ready,” Bucks coach Mike Budenholzer said.

The Raptors were clinging to a two-point lead in the closing minute after Khris Middleton drove around Leonard on the baseline for a layup.

Toronto was initially called for a shot-clock violation when Leonard missed a fadeaway jumper with 35 seconds left. That got overturned by a replay review, and Brook Lopez was called for a foul, instead, for bumping Marc Gasol after he retrieved the loose ball.

Gasol hit both free throws to make it 100-97. Another replay review went in Toronto’s favor when officials determined a ball went out of bounds off Brogdon with 26.8 seconds left. Brogdon pulled his hand away, thinking his dribble had gone off Pascal Siakam’s foot.

Siakam then drove for a dunk, making it 102-97, and the Raptors hung on from there.

Milwaukee was leading 81-79 with about 8 1/2 minutes left when Leonard nailed back-to-back 3-pointers. He hit two free throws before Siakam threw down a put-back dunk to make it 89-81.

The Bucks tied it at 93-all with 2:44 left on a 3-pointer by Lopez. VanVleet answered with one of his own before Antetokounmpo threw down an alley-oop dunk to cut it to 96-95 with just over two minutes remaining.

The Bucks set a fast pace early on and led by 10 after the first quarter, delighting the towel-waving fans chanting “Fear The Deer! Fear the Deer!” They withstood a 16-2 run by Toronto to start the second, with Antetokounmpo nailing a 3 to stop it.

The Bucks also went on a 14-2 run early in the third, with the Greek Freak throwing down a hard dunk off a feed by Middleton for a 63-51 lead. But the Raptors got right back into it.

Bucks: Brogdon started all 64 games he played in during the regular season, before missing basically all of the first two rounds because of a heel injury. With Brogdon back in the lineup, Nikola Mirotic came off the bench.

Game 6 is at Toronto on Saturday.

ABOVE PHOTO: Toronto Raptors’ Kawhi Leonard shoots past Milwaukee Bucks’ Brook Lopez during the second half of Game 5 of the NBA Eastern Conference basketball playoff finals Thursday, May 23, 2019, in Milwaukee. The Raptors won 105-99 to take a 3-2 lead in the series. (AP Photo/Morry Gash)