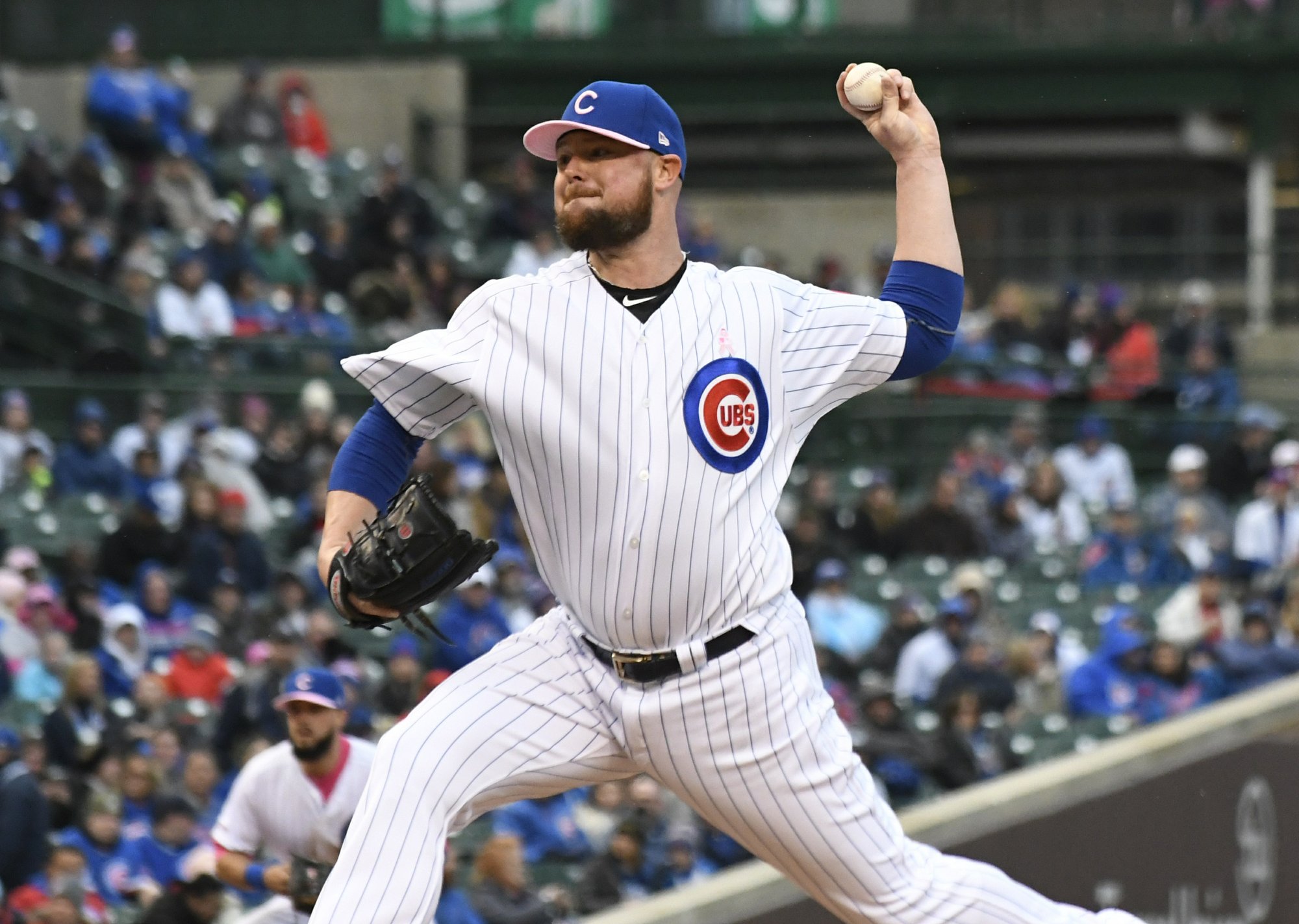 CHICAGO (AP) — Pitching in the rain for most of a cold Sunday night, Jon Lester gave the Chicago Cubs everything he had.

It was more than enough.

Lester worked his way through 6⅔ innings, Kris Bryant hit a two-run homer and the Cubs beat the Milwaukee Brewers 4-1 to take a weekend series between the top teams in the NL Central.

Taking the mound a day after Chicago used seven relievers during a 2-1 victory in 15 innings, Lester allowed an unearned run and nine hits while throwing a season-high 116 pitches. The ace left-hander lowered his ERA to a major league-best 1.16.

“Same mindset. I mean, every time my day comes, I want to finish the game,” he said.

The 35-year-old Lester (3-1) struck out six and walked one while becoming the first Cubs lefty to go three consecutive starts without allowing an earned run since Ken Holtzman in 1969.

“He’s been so good at pitching through adversity, making pitches when he needs to,” manager Joe Maddon said.

Milwaukee wasted a solid start by Jhoulys Chacín (3-4), who permitted two runs, one earned, and six hits in six innings. The Brewers finished with nine hits, but left nine runners on base.

“Lester pitched really good. He made really good pitches, and they played really good defense, too,” Chacín said. “I think when they needed today, they made those plays for him. At the end, we just couldn’t get the big hit there.”

After Báez’s two-out RBI double gave Chicago a 2-1 lead in the fifth, Milwaukee put runners on the corners with no outs in the sixth. Lester wiggled out of the jam with some help from Báez, who cut down Jesús Aguilar at the plate when the big first baseman tried to score on Hernán Pérez’s one-out grounder to shortstop.

Lester departed with runners at the corners in the seventh, and Brandon Kintzler struck out Aguilar looking to end the inning. Kintzler also worked the eighth — making an impressive grab on Ben Gamel’s inning-ending liner — and Steve Cishek finished for his second save.

“Great homestand,” Bryant said. “Super proud of the way that we’ve handled everything that we’ve been dealt.”

Bryant gave Chicago a 4-1 lead when he drove a 3-1 pitch from Adrian Houser deep to left-center with two outs in the seventh. It was Bryant’s seventh homer in his last 15 games and No. 8 on the year.

The Brewers tied it at 1 in the fourth when Christian Yelich reached on a three-base error by left fielder Kyle Schwarber and scored on Aguilar’s single.

Schwarber got turned around while going after Yelich’s drive. He also committed an error that led to a run in Lester’s previous start against Miami.

Brewers: OF Ryan Braun (sore left hamstring) was out of the starting lineup for the second straight day. He hit for Chacín in the seventh and grounded out.

Cubs: 1B Anthony Rizzo got the day off for the first time this season after his back tightened up during Saturday’s marathon victory. The slugger has a history of back issues, and the Cubs are off Monday. … 2B Daniel Descalso (sore left ankle) started for the first time since May 4. He had been limited to pinch-hitting duty since he got hurt running the bases against St. Louis.

Cubs: RHP Kyle Hendricks starts Tuesday night in the opener of a three-game series at Cincinnati. Hendricks (2-4, 3.19 ERA) has allowed only an unearned run in 17 innings over his past two starts. RHP Tanner Roark (3-1, 3.27 ERA) goes for the Reds.