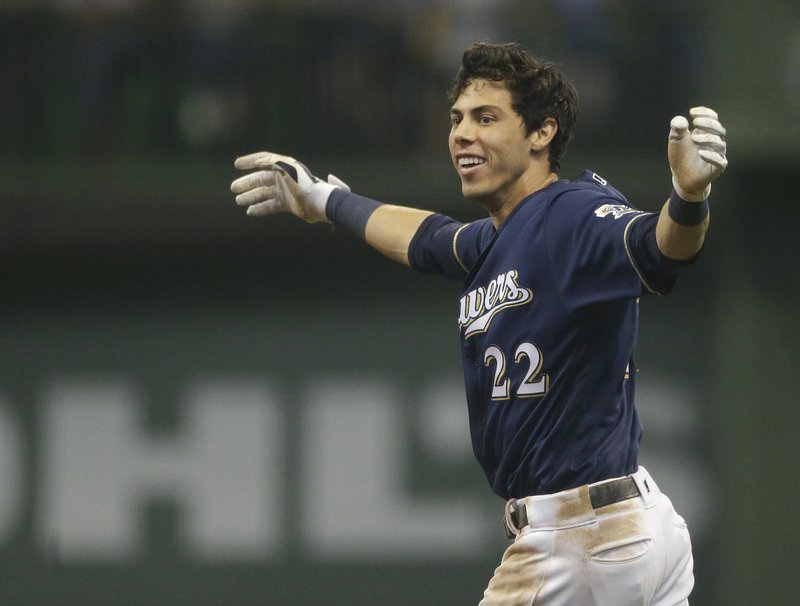 Yelich picking up where he left off in 2018

Yelich picking up where he left off in 2018

NEW YORK (AP) — Something figured to stop Christian Yelich’s historic home run pace — and a balky lower back might just do it.

The way things have been going, it certainly wasn’t going to be an opposing pitcher.

Yelich has carried over his outrageous finish to the 2018 season — one that ended with the Milwaukee Brewers winning the NL Central and Yelich earning his first NL MVP award — with an equally stunning start to 2019.

The 27-year-old outfielder hit his 14th homer Saturday during an 8-6 win over the Mets, a shot that tied him with Albert Pujols (2006) and Alex Rodríguez (2007) for most through the first full month of a season. On Sunday, Cody Bellinger of the Dodgers also hit his 14th home run of the year.

Yelich left Sunday’s 5-2 loss to the Mets with lower back soreness. Manager Craig Counsell said he is day to day.

An injury might be the only thing that can slow him.

That’s some wild production for a player who never finished higher than 19th in NL MVP voting over five seasons with the Miami Marlins. He was traded to Milwaukee before last season.

One of the biggest changes has been in Yelich’s aggression. After ranking among baseball’s most selective hitters early in his career, he has swung at the first pitch in nearly a third of his plate appearances this season. He’s doing more damage, too — he had a .990 OPS on first pitches in 2017, before some adjustments in Milwaukee. This year, his OPS on first pitches is 1.800.

For years before Yelich’s breakout 2018, stat heads had pegged the lefty as a prime swing change candidate because he ranked among the league leaders in exit velocity but slotted near the bottom in average launch angle.

Turns out, Yelich didn’t need a swing overhaul to get the ball in the air, just a tweak in his approach. That early count aggression has been a big driver in helping him get the ball off the ground.

And unlike some of today’s upper-cutting sluggers, Yelich’s offensive game essentially has no holes.

“When guys go on streaks like this, pitchers have adjusted, of course, and he’s come up with answers to that,” Counsell said. “There’s only so many things you can do. You can create different sequences. You can go more soft. You can go more hard-in. That’s all things that they’ve tried. He’s had answers for them.”

If there’s no adjustment pitchers can make, no hole to discover and exploit, could it be that this 94-game span isn’t a hot streak, but a new norm?

“I think people are going to be asking that question for the rest of Christian Yelich’s career,” Counsell said.

Elsewhere around the majors:

Vladimir Guerrero Jr. made his big league debut Friday night in Toronto’s 4-2 victory over Oakland. Guerrero, considered the major leagues’ top prospect, hit a leadoff double in the ninth inning for his first hit. Brandon Drury’s two-run homer then won it for the Blue Jays.

Guerrero had a hit in each of his first three games for Toronto.

Chicago fans had quite a night at the ballpark Friday, when the White Sox rallied from a seven-run, fifth-inning deficit to beat Detroit 12-11. The wackiest moment was when José Abreu appeared to have hit a three-run homer in the seventh, but was called out for passing teammate Tim Anderson near first base. Anderson had been retreating toward the bag in case he needed to tag up.

Anderson later made up for that confusion by hitting a game-winning homer in the ninth.

LINE OF THE WEEK