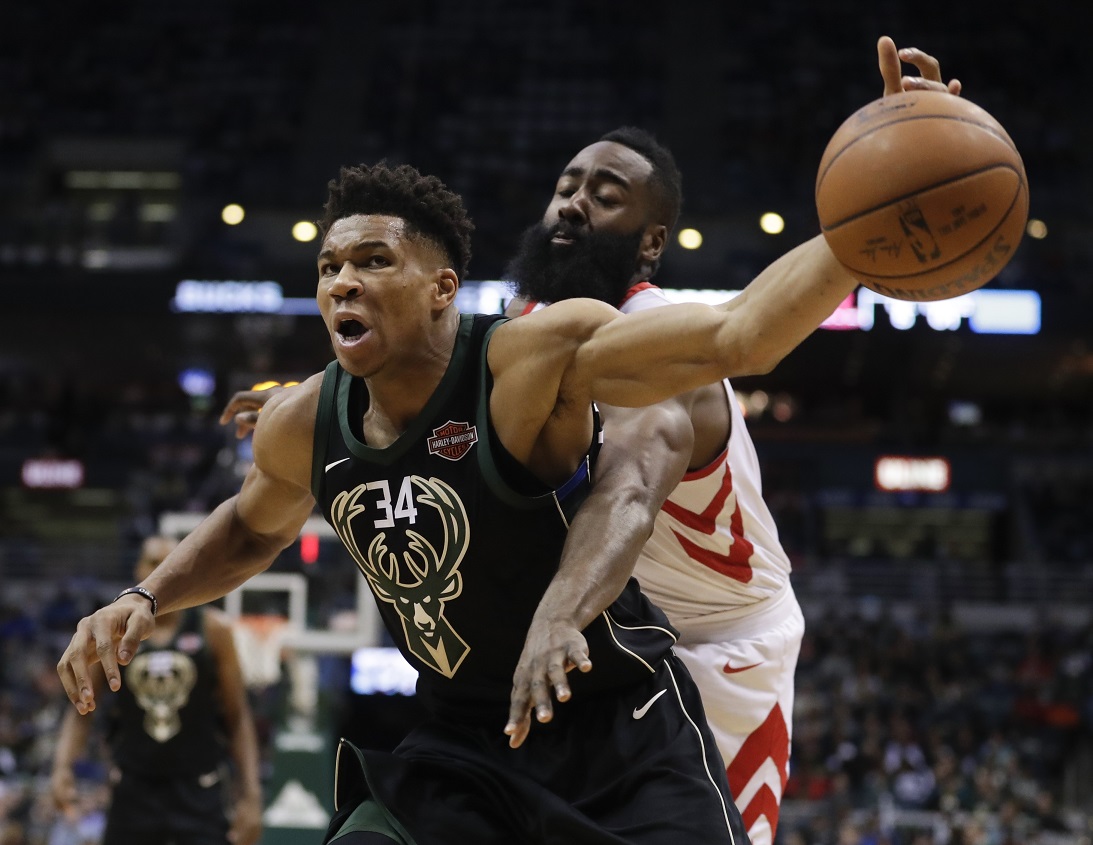 Bucks, Rockets have shot to sweep Pistons and Jazz on road

Bucks, Rockets have shot to sweep Pistons and Jazz on road

In their latest playoff games, the superstars had relatively lackluster performances and their teammates were more than capable of picking up the slack to put Detroit and Utah on the brink of elimination.

The Bucks can finish off a sweep of the Pistons in Game 4 on Monday night and the Rockets will get their chance to advance later the same evening against the Jazz.

Antetokounmpo scored just 14, his fewest in the playoffs in nearly two years, and it didn’t matter because six of his teammates also scored in double figures as top-seeded Milwaukee beat Detroit 119-103 on Saturday to take a 3-0 lead in their first-round series.

Harden missed his first 15 shots before closing strong enough to score 22 points as one of six Rockets in double figures in a 104-101 victory over the Jazz that gave them a 3-0 lead in the opening series.

“That’s what they’ve been doing all year long,” Harden said. “And, that’s why we’re in the position we’re in.”

The Bucks were in a position to give their players the option of taking Sunday off, allowing them a chance to get off their feet. They earned the right to relax after beating the Pistons three times by an average of 24 points.

Antetokounmpo likely took full advantage of the opportunity to rest and treat his bumps and bruises.

“Playing late in the season like this, your body is going to hurt,” he acknowledged. “At the end of the day, you’ve just got to fight through the pain and get yourself ready because we’ve got more games to go.”

The Pistons won’t after Monday, unless they pull off an upset in Game 4.

“The key is pride, coming in with effort, energy and not already having your cars packed up and ready to go,” Detroit coach Dwane Casey said.

Likewise, the Jazz are hoping to make a Game 5 necessary by extending the series with a win Monday night.

“It’s an uphill battle, but we’re not just going to lay over and give them a game,” Utah star Donovan Mitchell said. “That’s not who we are. That’s not who any of us are. We’re not afraid.”

No team has overcome a 3-0 deficit to win an NBA postseason series.

KEEP AN EYE ON: Antetokounmpo. Detroit does not have an answer for the 6-foot-11 forward, who will likely double his point production from Game 3 to score 28 points and match his average production from the regular season. After he was held to 14 points in the playoffs two years ago, he scored 30 and 34 in the next two games.

INJURY WATCH: Pistons forward Blake Griffin said his left knee felt fine about 14 hours after scoring 27 points in 30 minutes. Griffin was out with the injury for the first two games of the series and four of the last six games in the regular season. Bucks guard Tony Snell was on the court late in Game 3, coming back from a sprained left ankle that had kept the role player out for nearly a month.

PRESSURE IS ON: Andre Drummond. Detroit’s star center was 5 of 14 from the field and 2 of 8 at the line Saturday night. Drummond is heavily scrutinized in the Motor City because of his $130 million, five-year contract.

NEED TO KNOW: Houston has not swept a series since doing it against Orlando in the 1995 NBA Finals, when Hall of Fame center Hakeem Olajuwon was in his prime and current coach Mike D’Antoni was leading a team in Italy.

KEEP AN EYE ON: Harden. He was 3 of 20 in Game 3, his worst shooting performance in the playoffs since a similar performance in the first round last year. After going 2 of 18 in an opening-round game against Minnesota, Harden had 29 points, seven rebounds and seven assists.

PRESSURE IS ON: Joe Ingles. The Utah forward averaged a career-high 12.1 points during the regular season and was one of the team’s best 3-point shooters. He is averaging six points in the playoffs and has made just 4 of 17 beyond the arc.