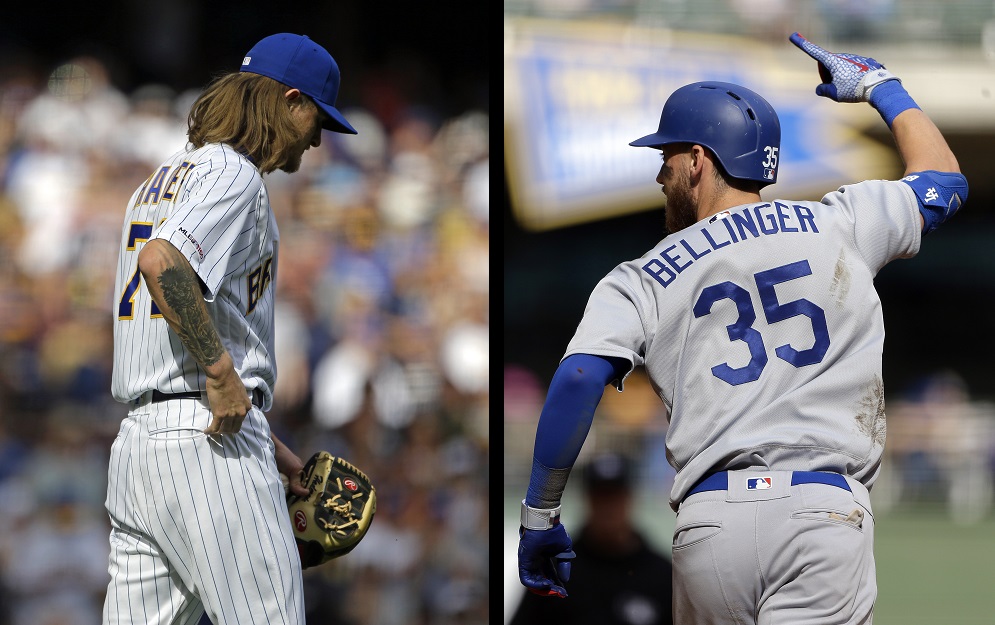 MILWAUKEE (AP) — Cody Bellinger saved a run with his glove and nailed down a series-clinching win for the Los Angeles Dodgers with his bat.

After the game, he focused on food.

“We are going to eat some pizza here in a minute,” Bellinger said when asked what he enjoyed most about the day. “Pretty hungry, honestly.”

Bellinger reached over the right field wall to rob Christian Yelich in the eighth inning of yet another home run.

After that, Bellinger hit a solo drive off Josh Hader with two outs in the ninth to lift the Dodgers over the Milwaukee Brewers 6-5 on Sunday.

Bellinger connected for his 11th home run after pinch hitter Eric Thames launched a three-run homer off Dodgers closer Kenley Jansen (2-0) with two outs in the eighth that made it 5-all.

“I just tried to put the barrel on it,” Bellinger said.

On Friday night, the hard-throwing Hader (0-2) gave up a three-run homer to Enrique Hernandez in the eighth that led Los Angeles to a 5-3 win.

“It just comes down to executing your pitch,” Hader said. “Bellinger is swinging a hot bat right now and he made me pay.”

Joc Pederson hit two home runs on his 27th birthday, including a drive to begin the game, and tied a career high with four hits. He scored three times as the Dodgers won for the seventh time in eight games.

Dodgers ace Clayton Kershaw allowed two hits and two runs in six effective innings in his second start of the season. The lefty opened on the injured list with left shoulder inflammation.

“At times he had every single pitch working, and there were times he really couldn’t find it,” Dodgers manager Dave Roberts said. “But when he needed to make a pitch he did.”

Pederson homered to straightaway center on the second pitch of the game against Brandon Woodruff. Corey Seager followed with a double and scored on Bellinger’s single.

Seager’s RBI double in the second extended the lead to 3-0. The cushion grew to 4-0 on Bellinger’s run-scoring single.

The Dodgers tacked on another run on Pederson’s second homer of the game, a leadoff shot off Woodruff in the fourth.

“We are hitting our stride,” Pederson said.

After failing to get a hit off Kershaw through four innings, the Brewers broke through in the fifth. Orlando Arcia led off with a triple and Lorenzo Cain homered into the Milwaukee bullpen in left-center with one out to cut the lead to 5-2.

Dodgers: C Russell Martin (lower back inflammation) will continue to work out with the team and isn’t expected to be sent on a rehab assignment, Roberts said. Martin is likely to be activated from the injured list when the team returns to Los Angeles for a three-game series against Pittsburgh starting April 26.

Brewers: 2B Mike Moustakas suffered a fracture to the tip of his right ring finger after a ground ball struck his hand during Saturday night’s game. Moustakas said the injury makes it uncomfortable for him to hold a bat. “If it is going to be really sore, and we have to give him ten days, we will,” manager Craig Counsell said. “Right now, we are optimistic enough that we are willing to go day to day.”

ANDERSON GETS ANOTHER START

After holding the Dodgers to one hit and no runs over five innings in a spot start on Friday, Chase Anderson (2-0) will get another start Friday in New York against the Mets.

With a gametime temperature of 72 degrees and sunny skies, the roof at Miller Park was open for the first time in 14 home games this season.

Adam Scherr, who wrestles in the WWE under the name Braun Strowman, threw out the first pitch.

Dodgers: After being off on Monday, Los Angeles will send Kenta Maeda (3-1, 3.80 ERA) to the mound on Tuesday to begin a three-game series at Wrigley Field against the Chicago Cubs. Maeda is 1-0 with a 2.53 ERA in two career starts versus the Cubs.

Brewers: Adrian Houser will be recalled from Triple-A San Antonio and make his first career start on Monday against the Cardinals in St. Louis.

0
0   0
previous Yelich homers, but too little, too late, as Dodgers hold of Brewers
next In 13-5 loss, Braun moves to 3rd all-time in hits, while Brewers look to bring Gio back
Related Posts