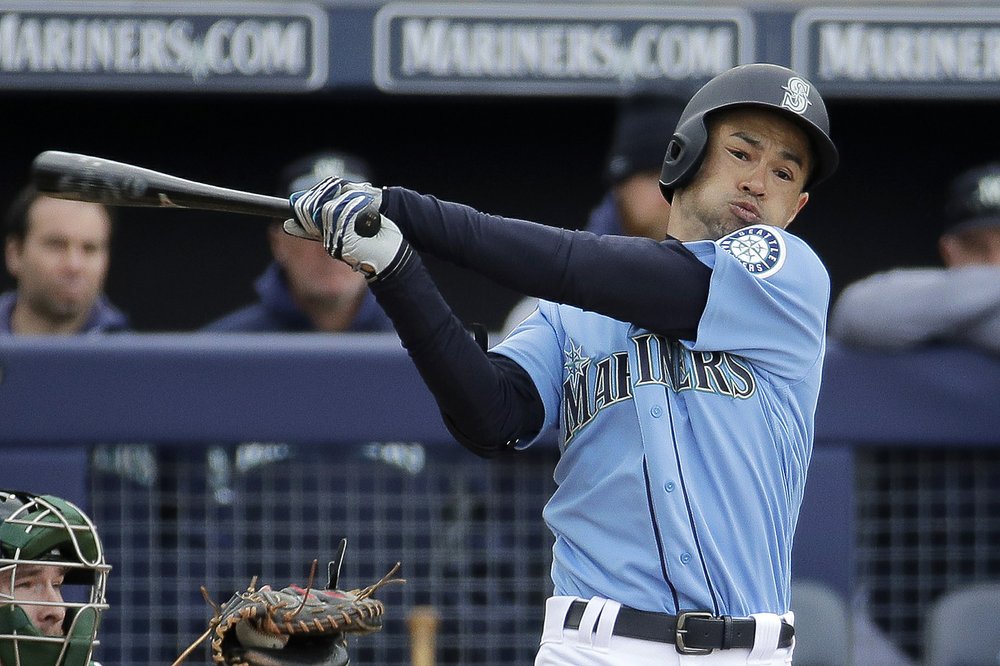 Mariners can’t wait to see reaction for Ichiro in Japan

Mariners can’t wait to see reaction for Ichiro in Japan

PEORIA, Ariz. (AP) — Jerry Dipoto never met Ichiro Suzuki in person until the day he was reintroduced as a member of the Seattle Mariners during spring training in 2018.

Suzuki’s one request for the hoopla that surrounded his return to the Mariners was the news conference and ensuing activities be kept, in his words, “casual.”

“The entourage arrived, and it looked like the CIA arrival for the president. It was dark windows, suburbans, and Ichiro rolled out and he walked into my office in what I can only describe as something off the runways type of suit,” Dipoto, the team’s general manager, recalled. “It was like a $5,000 suit that looked as crisp and clean as you can imagine. Impeccable knot in his tie with the dark sunglasses. My first reaction to him was not to shake his hand and introduce myself or the like, I slapped him in the chest and said, ‘I thought we were going casual?’ He said to me, and this was my intro to Ichiro, he said to me, ‘To me, this is casual.’”

That initial introduction for Dipoto to the World of Ichiro was only a small taste compared to what the Mariners are about to experience when they open the season in Tokyo with a pair of games against the Oakland Athletics. The most decorated player ever to export his talents from Japan to the major leagues is returning home for what could be a farewell to his Hall of Fame career on both sides of the Pacific.

It will be nearly a week of celebration and hype surrounding Ichiro. And his teammates are perhaps more excited, more eager than the star himself to see how massive the reception will be.

“I can’t imagine what that’s going to be like. I want to see what it’s like when Ichiro Suzuki walks down the street in Tokyo,” said Seattle pitcher Wade LeBlanc, who spent the 2015 season pitching in Japan. “He’s a God over there. I don’t throw that around lightly, either. I’m excited to see it.”

There is no question Suzuki will be on Seattle’s roster for the two games March 20-21 in Japan. He signed a minor league deal before the season, but with the intention of being on the expanded major league roster against the A’s. After Japan, there have been no promises about what, if any, role Suzuki will have with the team.

This may have only heightened the anticipation for seeing what happens in Japan knowing this could be the career finale for the 45-year-old outfielder.

“You’re talking about a whole country that just cherishes that he is theirs. … He’s just such a special player and someone that transcends both leagues, both cultures and really done incredible things that are almost a little bit unbelievable,” Seattle’s Jay Bruce said.

LeBlanc joked that he wants to strap a camera to his head, hang back about 30 yards and watch the reaction from onlookers if Suzuki goes out in public. Of the current Mariners roster, Dee Gordon has the longest relationship with Suzuki from their time playing together in Miami.

“It’s much-needed for him. Not just being in Japan but being in your home country as who he is, and who he is respected as, he deserves it,” Gordon said. “I want to see him happy. I want to see how happy it makes him. I know he’s going to be all professional but I actually want to see if we can get a reaction out of him. Some type of emotion.”

This won’t be the first time Ichiro playing in his home country creates all sorts of hoopla. He had four hits in the 2012 season opener in Tokyo when the Mariners and A’s last made this trip. But at that point, the twilight of Suzuki’s career was not on the horizon. He had yet to be traded to the New York Yankees, had yet to get his 3,000th major league hit, had yet to fully solidify his spot as a potential first-ballot Hall of Famer whenever his retirement becomes official.

His future beyond these two games in Japan is cloudy. Suzuki could decide this is it, saying goodbye in front of his countrymen. He could return to Seattle and try to earn a spot on the Mariners roster. He could move into a hybrid role like the one he had last year when he started the season on the active roster due to injuries and eventually shifted into an advisory position.

While he wouldn’t comment about Suzuki’s future, Dipoto did give a glimpse of the scenario he would love to see come to fruition.

“He’s in the lineup on opening day, and that as the flashbulbs go off, and he’s at the bat, he answers with an inside-out single to left field. That’s his trademark,” Dipoto said. “I know that Ichiro doesn’t run the way he did maybe 15 years ago, but he still runs above average, shockingly, for a 45-year-old man. I would love to see him get on base and do the things that Ichiro did 15, 18 years ago and excite the crowd and engage the community there in what we’re doing because I think the fact that the Mariners are going to play in this opening series in Japan, it’s kind of an homage to the franchise’s history with Japanese players. More so than our present attraction.

“I think this provides us with an opportunity to pay tribute to Ichiro, to his career, and to all that he’s been to this franchise, and really to international baseball. It seems the right thing to do for everybody.”