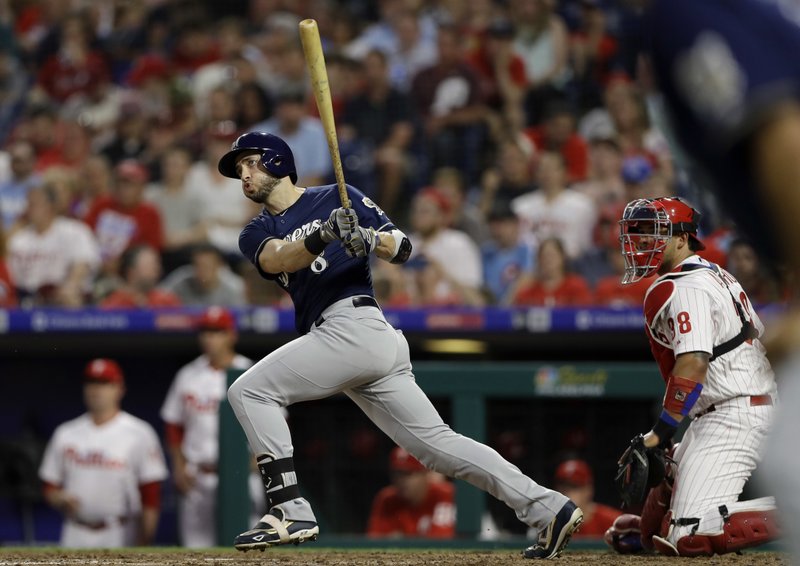 Brewers’ Braun changing swing, focused on being a force

Brewers’ Braun changing swing, focused on being a force

MILWAUKEE (AP) — Now 35, Ryan Braun is years past his dominant, MVP self. Yet the aging slugger is trying to set himself up to be a part of the Milwaukee Brewers’ promising future.

Specifically, Braun is doing something he’s never done: changing his swing. And to do that, he’s been using analytics.

“Based on where my swing was at the beginning of the offseason, I’ve made some productive adjustments at least according to all of those (analytics),” Braun said Sunday at the Brewers’ annual winter fan festival.

“It’ll be interesting to get back out onto the field and see how those things play out,” he said.

Braun often made solid contact last year, ranking 20th among qualified big leaguers in average exit velocity, just ahead of star sluggers Manny Machado and Mike Trout. But that didn’t translate to getting on base.

Braun is hoping his new and improved swing results in more homers.

“If you want to take luck out of the equation, you hit more balls over the fence,” he said. “If I’m able to do that, luck becomes less of a factor.”

“We talked about it at length last year, that all the numbers suggested that based on my batted ball profile that I was unlucky. But also that I’m still hitting the ball hard and doing a lot of things well,” he said.

One of the reasons Braun feels so re-energized and ready to make a difference is Milwaukee’s rise. He reached the postseason for just the third time last year, with the NL Central champion Brewers coming within one win of making the World Series.

The Brewers hadn’t been in the playoffs since 2011, when Braun was the NL MVP.

“I think for Ryan postseason baseball and pennant race baseball, it really does bring back the joy because it is so much fun,” Brewers manager Craig Counsell said.

“There is a lot of hard work that goes on in between that. Last year’s run allowed Ryan to discover that in him and what he enjoyed so much about the game. Because he was going through that and had some perspective of that, I think he was able to offer a lot to our other guys,” he said.

Lately, Braun has been lending his insight to Christian Yelich, who was the NL MVP last year in his first season with the Brewers. Yelich, who hit .326 with 36 homers and 110 RBIs, and Braun often worked out with each other in California during the winter.

“The challenge becomes figuring out when to say no,” Braun said. “Making sure to do your normal baseball stuff and improve for the season and keeping that your top priority while getting to experience these unique things that come along with the success he’s had.”

“I look at him like a little brother — we are together almost every day,” he said.

Long the face of the franchise, Braun spent part of Sunday on a stage, taking part in a Brewers-themed game show. In another area of the event, fans flocked to take pictures with Yelich.

Braun has entered into the latter stages of his career. A full-time outfielder for more than a decade, he moved over to first base for the first time last year, playing 18 games at the spot.

The Brewers wound up with five All-Stars last season, and Braun wasn’t one of them. On a team with Lorenzo Cain hitting over .300 and Jesus Aguilar and Travis Shaw each connecting for more than 30 homers, Braun is determined to be a force.

“I just try to stay present and stay focused on the task at hand,” Braun said. “Always trying to get better. I’m never satisfied with where I’m at and not accepting that I’m older, but that doesn’t mean I can’t get better.”